Being famous is not all about rainbows and unicorns. Yes, the whole world might know them, they might earn a crazy amount of money – but it all costs them their privacy. Ordinary folks constantly judge their looks, are too obsessed with their private life and frankly treat them like objects.

They’re also not protected from developing an entitlement syndrome. Well-known folks often get struck by this superiority complex that allows them to say and do questionable things and not face any consequences due to their power. For that reason, even with all the potential luxuries, their world is devilishly toxic and very damaging.

Look back on the recent Chris Rock incident, for instance. What seemed like an innocent joke earned him a smack in front of 2,500 notable attendees. Smith’s angry outburst split the audience into two camps, making them wonder whether the actor’s violent actions are justifiable.

Bored Panda has already covered this – however, for those who are not yet familiar with this unpleasant incident, the event took place on March 27th, during a live broadcast of the 94th Academy Awards ceremony. Rock, who was hosting, made a joke regarding Jada Smith’s shaved head by referencing the movie G.I. Jane, linking her appearance to Demi Moore’s. While the camera showed that Will found the comedian’s remark to be amusing, he later made his way towards Chris and slapped him across the face. 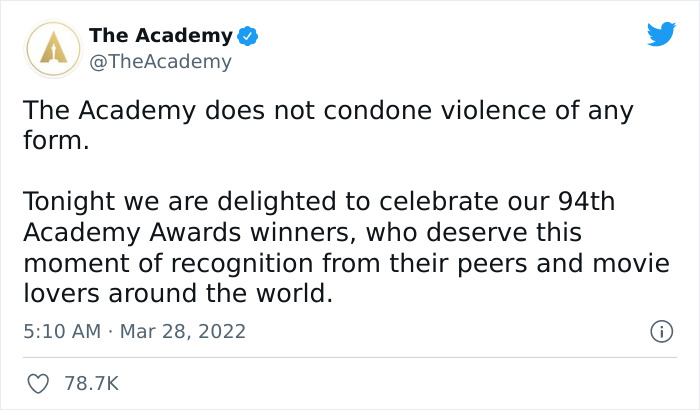 Naturally, the organization issued a statement saying how they don’t condone any sort of violence. It is known that the actor was asked to leave the event – however, he refused. Still, the board of governors revealed that they are indeed taking actions: “we have officially started a formal review around the incident and will explore further action and consequences in accordance with our bylaws, standards of conduct and California law.” 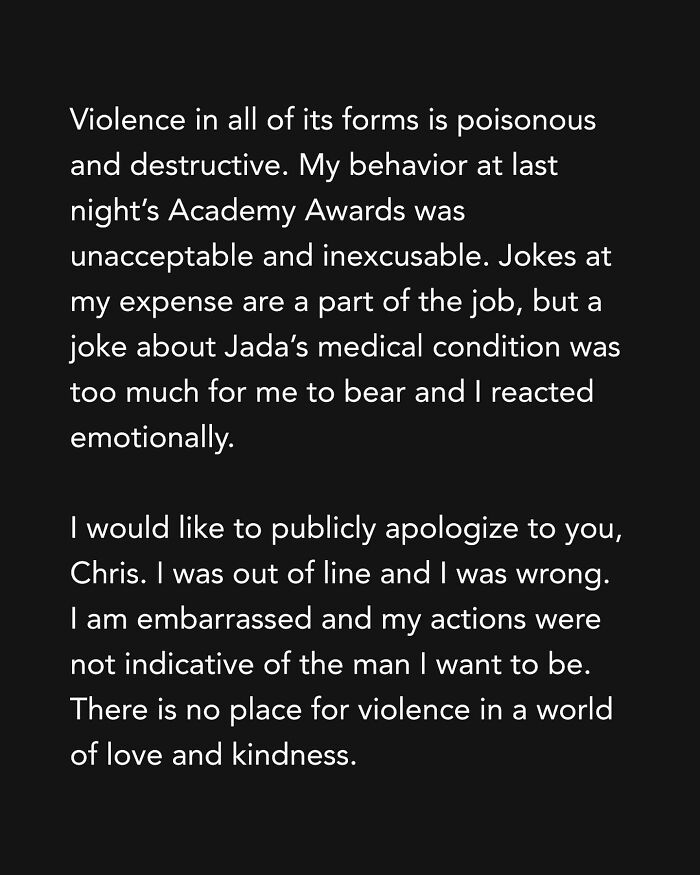 A few days after the shocking and unforeseen altercation, Will Smith finally broke his silence by addressing it on his Instagram page. The actor revealed that his actions were, in fact, unacceptable and inexcusable. Smith blamed the outburst on his excessive emotionality as the joke was made about his beloved wife’s medical condition (though Chris Rock says that he knew nothing about Jada’s alopecia). The man then apologized to Chris while admitting that he was wrong and out of line. 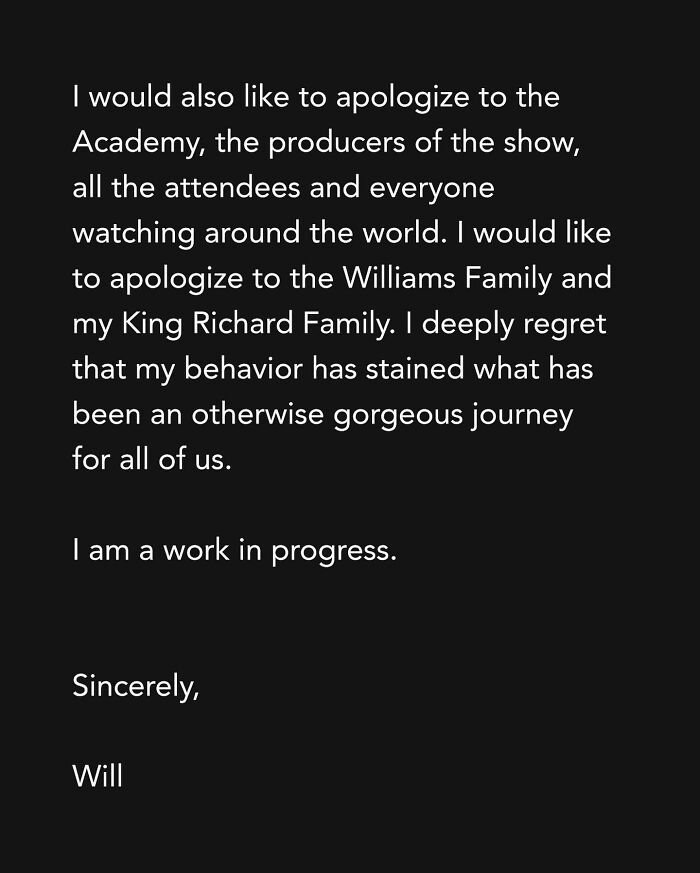 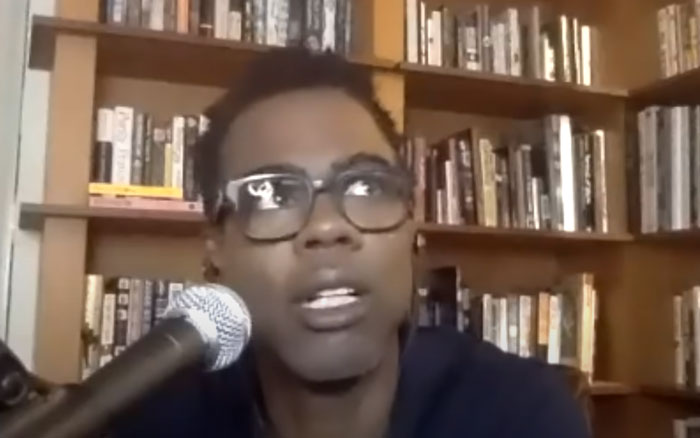 The public violence at the Oscars later provoked the resurfacing of Chris Rock’s interview for The Howard Stern Show that took place in 2020. The man revealed his struggles with past traumas due to sexual and racial harassment he faced in his childhood. Rock also shared a story about how he accidentally stumbled upon one of the school bullies during the making of “Top Five”.

The man told Howard Stern that he suffers from a big ego but very low self-esteem. If someone has anything to say about his work, the comedian could get very defensive, however – most of the time, he feels like he’s not worthy of anything. Stern supported the comedian with his words by saying that he’s no different and that he believes that it all comes from the atmosphere that one had back at home. 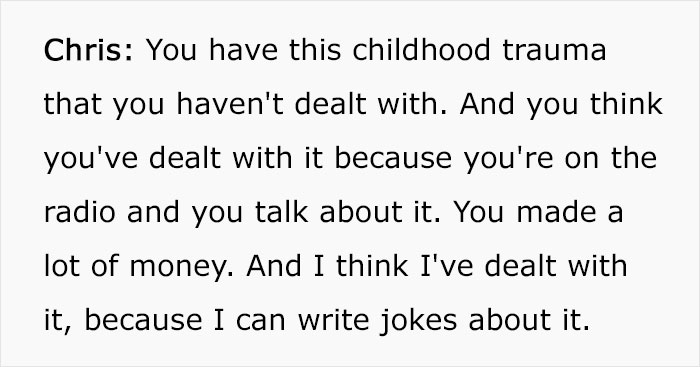 Rock confirmed the words of the radio personality and said that it definitely comes from the relationship that one has with his parents. Moreover, the comedian established a connection between him and Stern, as he went to a white school, whereas Howard went to a black one – so they share a somewhat similar experience. Chris then talked about how he believes that he has dealt with that agonizing trauma, since he writes jokes about it – yet, it’s absolutely not true. 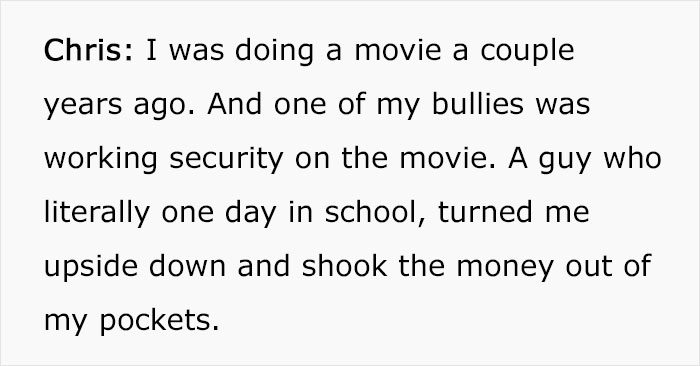 Chris revealed the heartbreaking truth that he was frequently assaulted, sometimes even sexually. Stern then asked whether he remembers the names of those who mistreated him back at school, to which the comedian replied with a story. In 2014, Rock was directing and simultaneously starring in a movie called “Top Five”. One day during filming, he realized that one of his bullies was actually working as security on set. 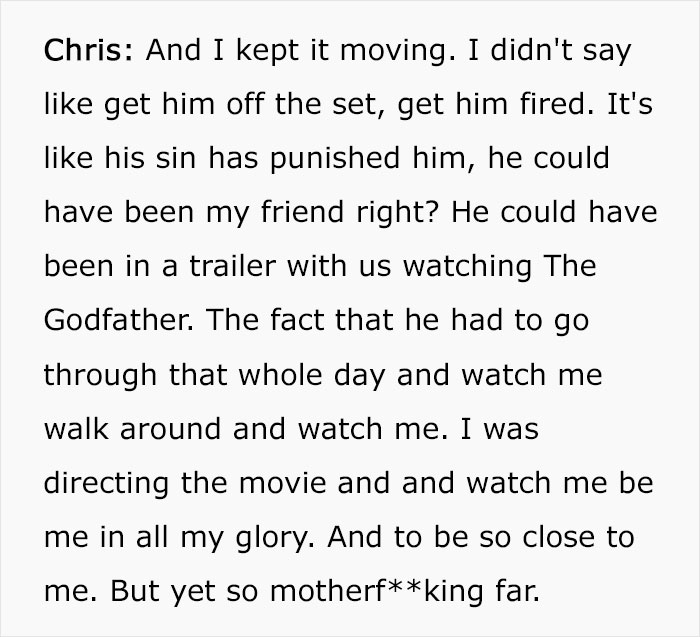 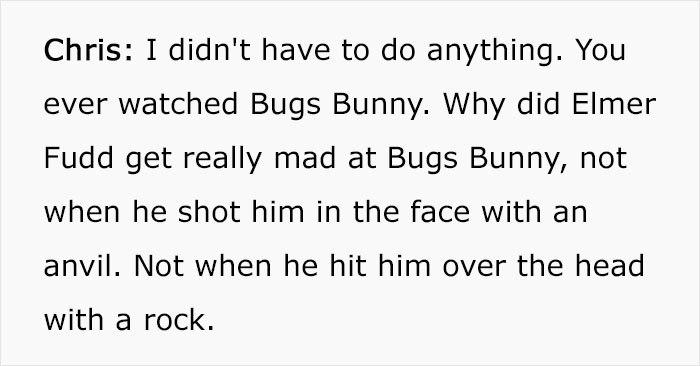 However, the man didn’t let his past traumas surface, even though it was the guy who had the audacity to turn him upside down and shake the money out of his pockets. Rock revealed that the universe did everything for him and it’s a shame because they could’ve been friends instead. The old bully had to endure seeing Chris at his best, directing the movie and simply enjoying life.

Having such a public life is never easy. Things can go south at any moment and the next thing you know – the whole world has turned against you. Similarly, you can never be sure what the person is going through, so maybe it’s a good idea to cut them some slack?

You can watch the interview here:

Fellow online users voiced their support for the comedian

I took one look at pale & vulnerable Azaylia and knew this was the day she would die, says Safiyya Vorajee

IN an exclusive extract from her book Loving And Losing You, Safiyya Vorajee shares the grief she and…
byBizLifetime
No comments

Queen Camilla Will Not Have Ladies-In-Waiting: Details

Why Demi Burnett Won’t Do ‘Bachelor in Paradise’ Again