Coda: What is the film about and where to watch it ahead of Oscars?

The night of glitz and glamour is upon us, as stars are preparing to walk down the red carpet at tonight’s Oscars.

Some of the biggest names in Hollywood will be in attendance at the Dolby Theatre in Los Angeles, and many of them, from Beyonce to Benedict Cumberbatch will be practicing their celebratory speeches or working on those gracious loser faces.

CODA is up for best picture, best adapted screenplay and best supporting actor and, if it bags all three, the film would be the seventh best picture winner to score every category it was nominated in.

Running against psychological drama The Power of the Dog, CODA could be set to make history.

What is CODA about?

CODA (Child of Deaf Adult), tells the story of Ruby Rossi (Emilia Jones), the only hearing member of a deaf family, who is torn between her musical ambitions and supporting her parents was their family fishing business comes under threat.

The film has been hailed revolutionary for its insights into deaf culture and representation on screen.


The coming-of-age story follows Ruby Rossi as she is torn between her dreams and her family (Picture: Apple TV)

Set in Massachusetts, high-school student Ruby helps her father and brother on their fishing boat, and also acts as the family’s interpreter.

Her passion is for singing, and although she wants to follow her talent to Berklee College of Music in Boston, she’s torn to start her life away from her family.

Another level of her dilemma is pursuing something her family cannot connect with.

If she chooses to go, she may hurt them and their fishing business in the process.

Is CODA based on a true story?

Although CODA is not based on a true story, it mirrors real life experiences faced by members of the deaf community and children of deaf adults.

The award-winning film has been adapted from the 2014 French film La Famille Bélier.

Who stars in CODA?

Alongside Emilia, deaf actors Marlee Maitlin and Troy Kotsur were cast in the film as Emilia’s parents Jackie and Frank, with Troy recently becoming the first deaf actor to win a Bafta. 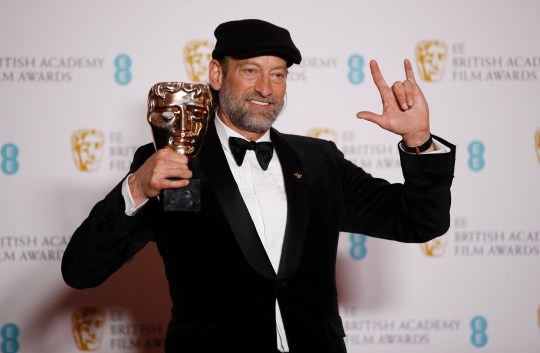 Troy Kotsur posing with his award for best actor in supporting role for CODA (Picture: REUTERS)

Other actors appearing were Courtland Jones, Eugenio Derbez and Ferdia Walsh-Peelo, and they have won the SAG Award for Best Ensemble.

Emilia, while not a Coda herself, learned ASL for the role, as did director Sian Heder, who worked with deaf actress, dancer, director and educator Alexandria Wailes and ASL master Anne Tomasetti.

Where can I watch CODA?

You can stream CODA right now on Apple TV Plus.

Their youngster is set to make her silver screen debut (Pictures: Dave Benett / Getty Images for Apple…
byBizLifetime
No comments

The star discussed what could have been (briefly) (Picture: Rex/Getty) Tom Hanks has revealed that a Forrest Gump…
byBizLifetime
No comments

Dame Emma Thompson has opened up about the ‘thirst’ for seeing female pleasure in cinema, describing her new…
byBizLifetime
No comments