Jake Gyllenhaal not opposed to following sister Maggie into directing

Jake Gyllenhaal is on a stool, perfectly framed in a halo of angelic light. I am not, on the other hand, the mid-morning gloom casting moody shadows across my mug, via Zoom.

‘Truly the only way for any performance that’s interesting of mine is to just half-light it,’ smiles Gyllenhaal, in good humour. ‘That’s the secret. I just gave it away.’

Don’t expect any arty lighting in his latest film Ambulance, though. It’s the usual Michael Bay all-guns-blazing bonkersness, with Gyllenhaal and Yahya Abdul-Mateen II (from the Candyman remake and The Matrix Resurrections) as adoptive brothers trying to make their getaway in a stolen ambulance with the cop they’ve just shot after a heist gone wrong. Suffice to say, this is not usually Gyllenhaal’s ouvre.

‘I’ve been a huge fan of Michael Bay since [1996 thriller] The Rock,’ counters Gyllenhaal, looking as stylish in his patterned sweater as Danny Sharp, the cashmere-wearing career-criminal he plays in the film.

‘He adores actors, which I learned while we were making the movie, and pulls things out of them that are really fun. I thought it was so cool to be in a big action movie, particularly with someone who I would consider an auteur of it, to see how he does it.’

Danny and Will’s cat-and-mouse game with the cops takes place over a breathless few hours in downtown LA, and though Gyllenhaal doesn’t get to drive, he did get to be cameraman.

‘There’s one moment where I was in the passenger seat because that ambulance is so small,’ says the 41-year-old.

‘The way Michael shoots is he uses his camera as a bit of a diviner rod, for moments that are alive, so he can move at any time – he’s very agile. He saw Yahya at an angle, and I was sitting in the chair, and the light was coming through in a particular way. And Michael just passed the camera off on to me and said, “You shoot it.”

‘I don’t feel uncomfortable with a camera. And Yahya’s so darn handsome, that I couldn’t stop filming it. But we were moving so quickly. Sometimes we would have to hold something for someone or move something really quickly just to get the shot in the right way, because we were running and gunning this entire shoot.’

There was also Nitro the dog to handle: ‘He’s a significant why we don’t get caught!’ laughs Gyllenhaal. ‘As the characters, we should thank him. There isn’t just one Nitro, there are three playing him.

‘The irony is that Michael Bay is maybe the fastest moving, fastest talking person I know. And those dogs are probably the slowest I’ve ever seen. So, as always, Michael Bay is a walking contradiction. And such beautiful dogs, such sweet dogs. I gotta say.’

Nitro may be their saviour, but with Will behind the wheel, the police on their tail and a wounded passenger to keep alive, things are intense. Danny and Will’s fractious sibling relationship makes it even more so. 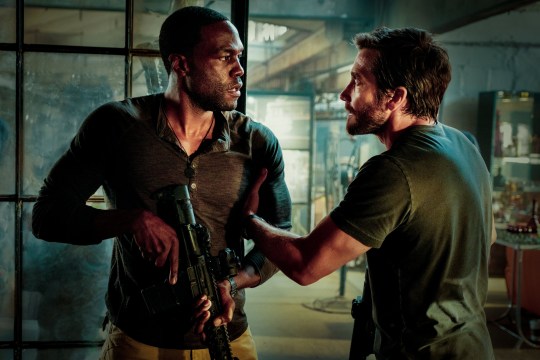 ‘It was easy to be brothers,’ shrugs Gyllenhaal. ‘We both come from very strong families. He’s a kid of six. I have very strong relationship with my siblings [sister Maggie and step-brother Luke]. And I think when you come from that, that definitely can make you humble.

‘But I do think that he has such a good heart that it was really easy to just jump into the idea of being family together.’

Certainly, the bond between these two feels real, childlike but caring. There’s friendling rib-nudging, and at one point, Gyllenhaal helps his co-star Yahya (who joins us in the Zoom room) out when he stutters over the word ‘required’.

They may not be blood brothers, but they sure act like it. ‘I mean, most of our random ideas [for the film] came from our own relationships with our siblings,’ he explains. ‘There’s nothing like it.’

In his case, that bond is iron-clad. The Cleveland-born Gyllenhaal and older sister Maggie grew up in an artistic household (their mother Naomi was a screenwriter, their father Stephen a director).

‘We come from a family of storytellers… that’s the thing that we’ve always loved since we were kids. Dinner [time] was always drumming up stories and thinking about them. It’s something I think, probably – until we both grew up – we took for granted.’

Gyllenhaal just has seen Maggie head to the Oscars with her directorial debut The Lost Daughter (even attending the New York premiere with his French girlfriend, Jeanne Cadieu).

‘It’s no surprise to me that my sister wrote and directed an incredible film… it was only a matter of time.’ Can he ever see himself stepping behind the camera? ‘I feel like I have it in me; it’s just about which story would click. In the meantime, I’m following her lead, as I have since I was born!’ 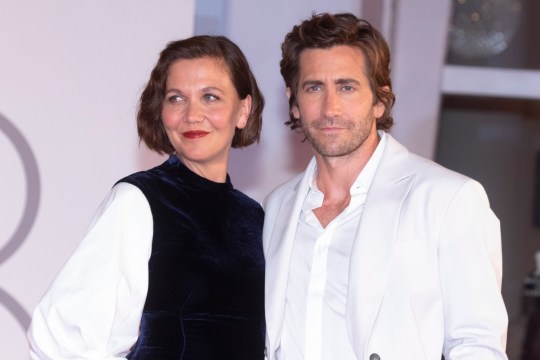 So what are his ambitions? He’s already produced movies and acted on stage in shows like This Is Our Youth. But now all he wants to do is take the ride (in an ambulance or otherwise) with those he admires, like new BFF Abdul-Mateen II. ‘It’s about enjoying the process,’ he admits.

‘I think the pandemic has made me feel that way. And really setting more time aside for my actual life and the people I love in it.’ Aww, bless.

Ambulance is in cinemas now.

Megan Thee Stallion has declared her interest in rebooting the classic noughties film Bring It On. During an…
byBizLifetime
No comments

Danny Boyle to direct dance adaptation of The Matrix for stage

The Matrix is coming to the stage (Picture: Rex / Getty Images) Singing, dancing, and dodging bullets –…
byBizLifetime
No comments

These incredible movie scenes were brought to life by Lego

IT’S the flicks – in bricks! After we told last week how an Only Fools fan remade scenes…
byBizLifetime
No comments

Ray Liotta had completed production on numerous TV and film projects before his death. The actor passed away…
byBizLifetime
No comments