Coda has won best picture at the 2022 Oscars (Picture: AP)

Coda has won the best picture award at the Oscars during a rollercoaster ceremony.

The film beat out stiff competition from The Power of the Dog, King Richard, Nightmare Alley, Belfast, Dune, Licorice Pizza, Drive My Car, Don’t Look Up and West Side Story for the coveted statue.

The Apple TV+ masterpiece, by director Sian Heder, made history on the night after becoming the first movie on a streaming service to win the award.

Lady Gaga and Liza Minelli presented the award to the drama, which has been highly praised by fans and critics.

‘Thank you to the Academy for letting our Coda make history tonight,’ he said. ‘Congratulations to all of our fellow nominees, your movies were so incredible, we’re all honoured to be here. 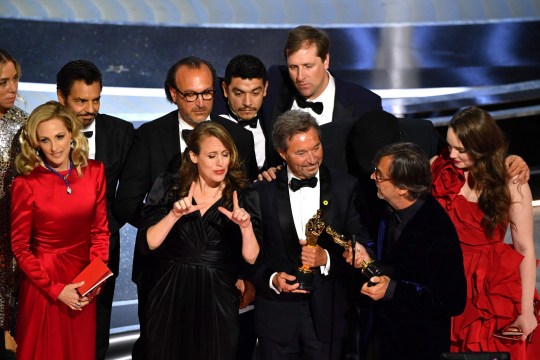 ‘Sian, it hasn’t been an easy ride from the first day of shooting when our cast and crew were supposed to be at sea fishing at 4am when we were told a giant storm was about to hit us.

‘It was only the beginning of our problems, but you kept the boat afloat and you’ve been the best captain a producer could ever dream of.

‘To our incredible cast, you guys have made such a wonderful and loving family on screen but also off screen, everybody wanted to be a part of it and no one seems to want to leave it.’ 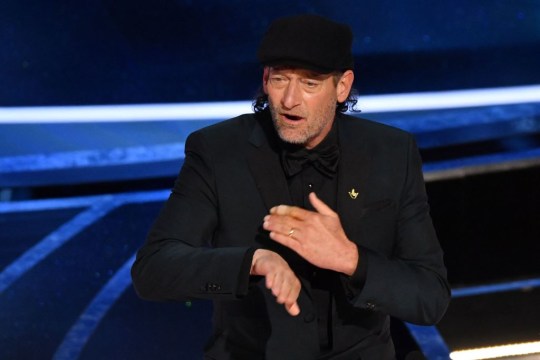 Troy Kotsur made history earlier in the evening (Picture: Getty)

‘I want to thank also the incredible crew we have, including the fishermen community in Gloucester.

‘The incredible team at Apple TV, they’ve been absolutely amazing from day one and were able to put this movie everywhere in the world, thank you all of you.’

The movie follows Ruby Rossi (Emilia Jones), the only hearing person in a deaf family, as she struggles to balance her dreams of singing and going to music school with her family.

Her parents, Frank and Jackie Rossi (played by Troy Kotsur and Marlee Matlin respectively), are concerned about their fishing business, while her brother Leo (Daniel Durant) struggles with his place in the family.

It was a successful night for all involved in the film as Troy took home the best supporting actor gong earlier in the evening.

Actor in a Leading Role
Will Smith – King Richard

Actress in a Supporting Role
Ariana DeBose – West Side Story

Directing
Jane Campion – The Power of the Dog

Documentary Feature
Summer of Soul (…Or, When the Revolution Could Not Be Televised)

He also made history at the ceremony, becoming the first deaf male actor to win the coveted statue.

The actor followed in his co-star Marlee’s footsteps after she nabbed an acting trophy for 1986 film, Children of a Lesser God.

Speaking on stage alongside an American Sign Language (ASL) interpreter, Troy paid tribute to director Sian Heder, and his family.

‘It even reached all the way to the White House…we met our president Joe and Dr Jill,’ he told the star-studded crowd.

‘I was planning on teaching them some dirty sign language but Marlee Matlin told me to behave myself, so don’t worry Marlee I won’t drop any f-bombs in my speech today.’

Addressing Sian directly he said: ‘You are our bridge and your name will forever be on that bridge, Sian Heder bridge, in Hollywood.’

‘This is dedicated to the deaf community, the Coda community and the disabled community,’ Troy concluded. ‘This is our moment.’

James Cameron reveals he clashed with studio over ‘Avatar’

James Cameron has detailed clashes he had with studio bosses ahead of the original Avatar‘s release. Ahead of…
byBizLifetime
No comments

Who wouldn’t want to see him back as grumpy but lovable Phil?(Picture: Disney/Getty) Praise the Muses, Danny DeVito…
byBizLifetime
No comments