Singin’ in the Rain 70th anniversary: How the movie changed my life

Singin’ in the Rain ignited an interest I’ve made into a career (Picture: Rex/Tori Brazier)

Singin’ in the Rain as a song is something that needs no introduction – everyone knows the lyrics – and most are aware of the later film built around it and released when MGM Studios was at the height of its movie musical making powers in the 1950s.

It’s a movie that graces many ‘best of’ lists, from the American Film Institute’s to the British Film Institute’s and holds a perfect 100% Tomatometer score on Rotten Tomatoes (which not even Citizen Kane boasts anymore).

It has survived the test of time, and now, 70 years after its initial release, the film stands tall as a masterpiece from the Golden Age of Hollywood.

It also changed my life when I watched it as a 13-year-old. This seems a rather dramatic statement, but I remember the day vividly – I have my life and interests marked out from before I saw the movie and afterwards.

As someone who had always enjoyed films with my family, my mum had picked up an old 50th anniversary DVD release of Singin’ in the Rain from the local branch of WHSmith for £5.

It had been hanging around in a small stack on the top of the TV speaker for a fair while before we finally got round to watching it one evening in the summer holidays. I was instantly hooked.

The story, the music, the stunning dance routines and the vibrant colour reeled me in with ease, despite the fact I hadn’t paid any particular attention to older films before then. Sure, I watched some of them, like The Wizard of Oz, but their context hadn’t been of any real interest to me at that stage.

A big part of its attraction is the unbridled joy Singin’ in the Rain showcases for moviemaking, with Betty Comden and Adolph Green penning a screenplay to work around producer Arthur Freed’s song hits with partner Nacio Herb Brown from the 1920s and 1930s. 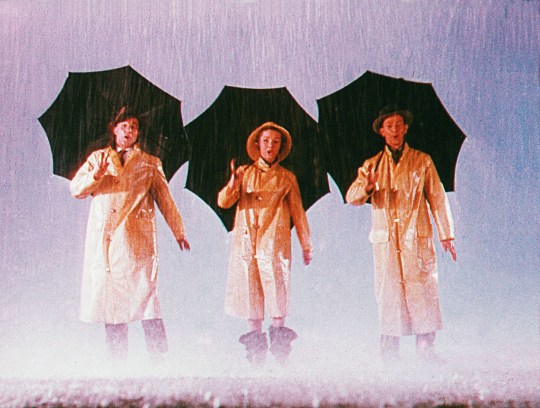 The film is oftern ranked among the best films ever made (Picture: MGM/Kobal/Rex/Shutterstock) 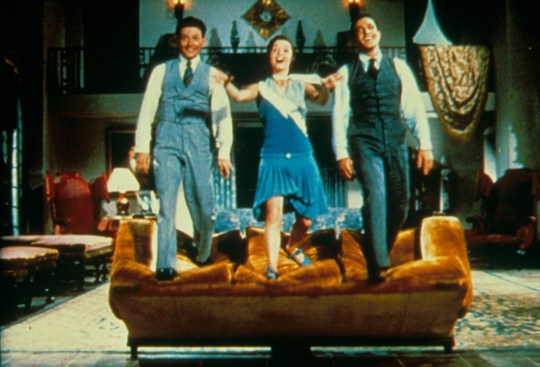 The best way to make those songs work for 1952’s Singin’ in the Rain was to set the movie in 1927. What was happening in Hollywood in 1927? Just the small matter of the dawn of talking pictures, a technological leap forward thanks to Warner Bros.’ The Jazz Singer, and a potential death knell to the careers of the Tinseltown’s brightest silent stars, if they didn’t have the voice to match their face.

Those are some compelling stakes, right? Singin’ in the Rain then brought in a love-hate relationship between its fictional movie stars, the dashing and popular Don Lockwood (Gene Kelly) and squeaky-voiced conniver Lina Lamont (Jean Hagen), spirited newcomer Kathy Selden (Debbie Reynolds) – with whom sparks fly for Don – and Don’s best friend, musical arranger and fellow former hoofer Cosmo Brown, played by one of Hollywood’s most gifted dancers, Donald O’Connor.

Its zippy and entertaining plot could teach modern filmmakers a thing or two about pace and tight editing, while the dance numbers are something truly special, from the 13-minute Broadway Melody dream ballet to the cheerful Good Morning routine – the demands of which infamously filled Reynold’s shoes with blood – and the iconic titular solo song for a gleeful but rather wet Gene Kelly.

That’s not to mention my personal favourite, Moses Supposes, which sees Don and Cosmo messing around with a studio diction expert as Don practices ahead of converting his latest picture, The Duelling Cavalier, into a musical, The Dancing Cavalier.

That Donald O’Connor was reaching the peak of his career just as the movie-musical bubble was set to burst, after dancers like Fred Astaire and Gene Kelly had been able to ride the wave of peak popularity in the 1930s and 40s respectively, makes for a slightly bittersweet viewing experience – but he did get a Golden Globe for his performance. 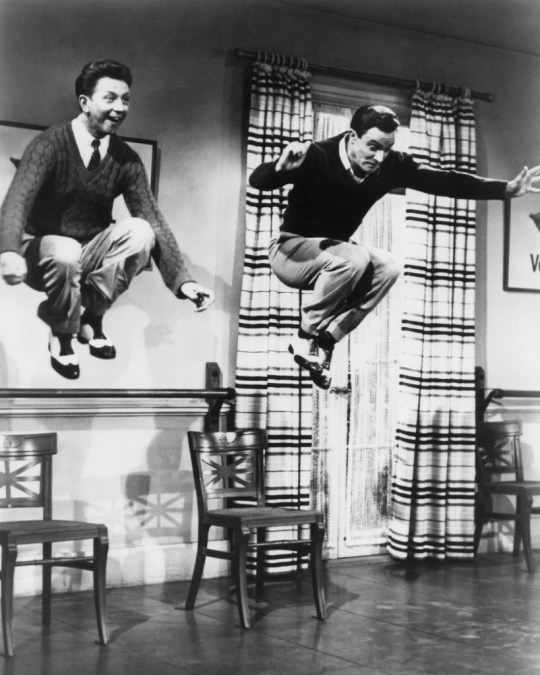 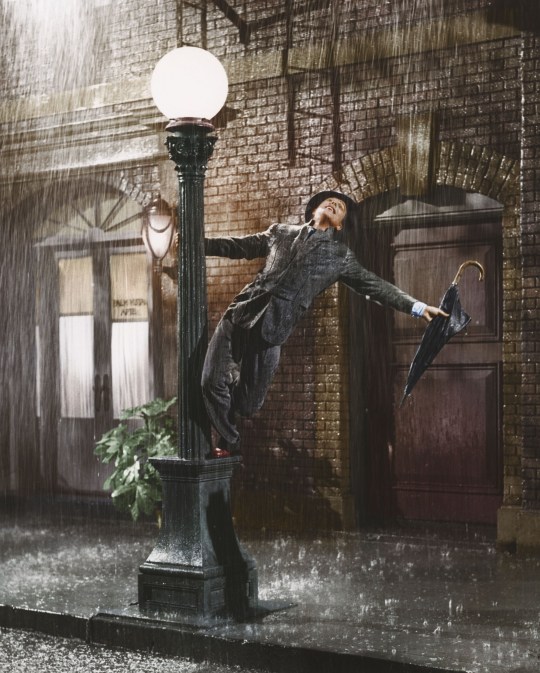 This is still one of the most iconic images in cinema (Picture: MGM/Kobal/Shutterstock)

After being bowled over by watching Singin’ in the Rain, the thing that helped feed my fascination into full-on obsession was the glorious second disc of special features.

With outtakes, documentaries and extracts from the films in which many of the songs originated, I was suddenly introduced to the glorious history of Hollywood and movie musicals.

In this era of streaming, one of the biggest downsides is studios’ decisions to curb the release of bonus features now physical releases are not the only way to consume the latest film and TV.

I’m in no doubt that having this extra context and content ready to go helped further cement my interest and fuel my excitement over what I should watch next.

One of the best parts about finding a love for classic Hollywood films was immediately revisiting my family’s collection for gems I might have missed, as well as raiding my grandparents’ knowledge and shelves too.

They were able to lend me a huge book all about the history of MGM Studios, as well as VHS tapes with recordings of films like High Society, Hello Dolly, On the Town, Seven Brides for Seven Brothers – so that was the rest of my summer holidays sorted.

I was also introduced to Fred Astaire and Ginger Rogers, as well as hoovering up non-musical classics like Casablanca, The Philadelphia Story, Roman Holiday and The Magnificent Seven. 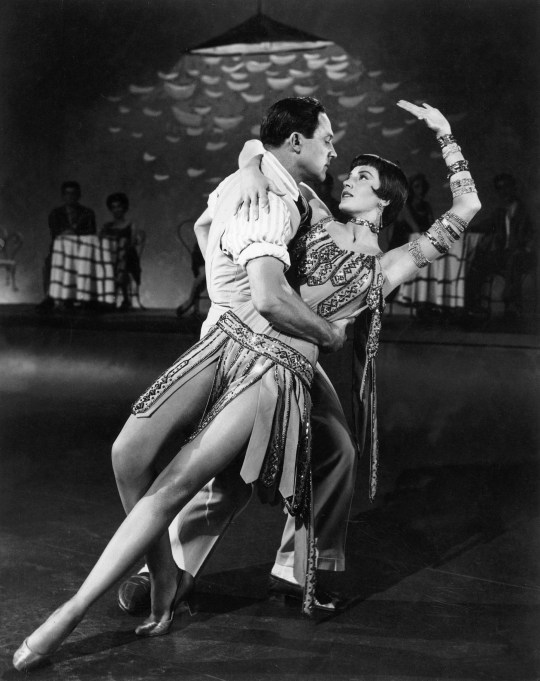 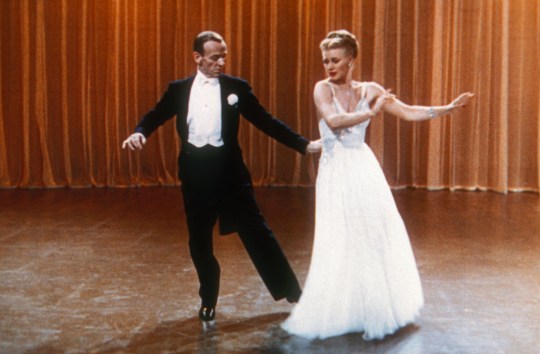 Singin’ in the Rain turned me on to a whole raft of other Golden Age musicals and movies, including the work of Fred Astaire and Ginger Rogers, who danced in 10 films together (Picture: MGM/Kobal/Shutterstock)

This passion for Singin’ in the Rain and the Golden Age of Hollywood saw me develop – proudly – into the full-on film nerd I am today. At university, I joined the cinema society and co-edited the screen section of the student paper, before it led me into a career of writing, acting, film criticism and into the role I enjoy today.

I was also incredibly fortunate enough to meet the late, great Debbie Reynolds in 2010 when she did her Alive and Fabulous tour around the UK. Accompanied by my parents they – let alone me – cut the average age of the audience down some, something which the actress herself remarked on afterwards.

I didn’t say much because it remains the one time I have truly been starstruck; I am generally a shy person outside of interviews I can prepare for. I may have been lucky enough to speak to plenty of film stars since, but there’s something about the old Hollywood glamour that reminds you they don’t them like they used to.

A spry 78 at the time of her tour, Reynolds appeared immaculately made up and in a sparkly travel outfit in the theatre’s auditorium after her show and stood and met, spoke with, signed items and posed for pictures with every last fan that queued up to meet her.

Twelve years later and I’m not sure it’s properly sunk in that I met her through the sheer stroke of luck of her not only travelling to the UK to tour, but also visiting a venue in the town where I lived! 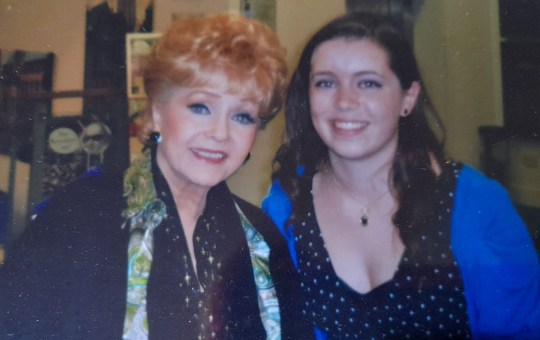 This is an encounter I don’t think any star or ceebrity can top (Picture: Tori Brazier)

It’s also an experience I am unlikely to repeat as a pretty insurmountable downside of loving classic films is that almost all of my favourite actors, directors and writers have long since left us.

I also learned that Reynolds was as passionate a fan of classic films as I was, and one of Hollywood’s first true collectors, buying up plenty of historic costumes and props at auction at a time when the industry had yet to realise what the true value of these might yet become.

After failing – five times – to get the Academy of Motion Picture Arts and Sciences to help persevere and exhibit some of her pieces, she was forced to sell parts off to pay debts before her death one day after her daughter, Star Wars actress Carrie Fisher, in 2016.

She was finally given her due by the Academy and its newly-opened museum in 2021, which houses parts of her remaining collection and named its conservation studio after the star. 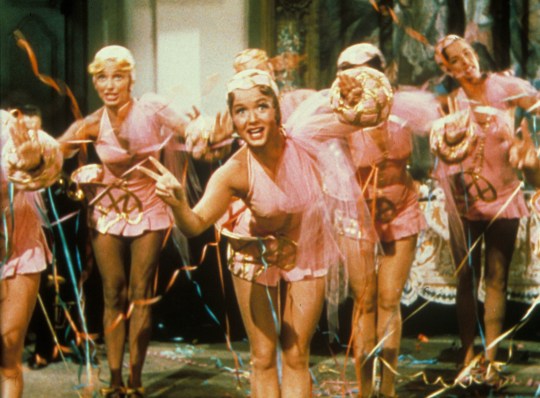 Reynolds went on to a distinguished career in Hollywood after Singin’ in the Rain, and became instrumental in the preservation of film props and costumes (Picture: Moviestore/Rex/Shutterstock)

If there’s anything that remains to be said following my tribute to Singin’ in the Rain and how it shaped by life (other than please, for crying out loud, watch it if you haven’t already), I guess it would be – embrace your passions, your interests and the things that make you a nerd.

After all, one day you might be paid to have them, and you might also get the chance to write a piece 15 plus years in the making on your favourite-ever film.

Moses Sumney has unveiled details of a new concert film before announcing his break from music. Sumney was…
byBizLifetime
No comments

A first teaser has been unveiled for the Predator prequel film Prey, as well as a release date…
byBizLifetime
No comments

Aquaman 2 hit with delay after controversy over Amber Heard role