Will said he ‘felt sorry’ for his co-stars Emma and Jennifer during the scene (Picture: Kevin Mazur/WireImage)

Will Poulter has opened up about the scene in We’re The Millers that saw him kiss Jennifer Aniston and Emma Roberts, admitting he ‘would have appreciated’ having an intimacy coordinator on set.

In 2013, the Maze Runner actor starred as Kenny in the comedy film alongside Jennifer, Emma and Ted Lasso’s Jason Sudeikis, which told the story of a small-time drug dealer who hires a fake family in order to try and smuggle marijuana into the US from Mexico.

In one scene, Emma’s character Casey takes pity on her fake brother Kenny after learning he’s never kissed a girl, resulting in her kissing him to show him the basics.

After David (Jason) and Rose (Jennifer) walk in on them, Rose then joins in, with Kenny alternating between the two women in a clip that’s been watched tens of thousands of times on YouTube.

In a new interview, Will, 29, admitted that it was ‘really awkward’ to film, adding that his ‘main concern in that moment was for Jen and Emma, who I felt very sorry for’.

The British actor, who’s set to join the MCU in the upcoming film Guardians of the Galaxy: Vol. 3 as Adam Warlock, told The Independent that often when he goes into bars and pubs, he doesn’t know how to respond when ‘blokes shout things about that scene at me or ask weird questions I’ve been asked a million times before’. 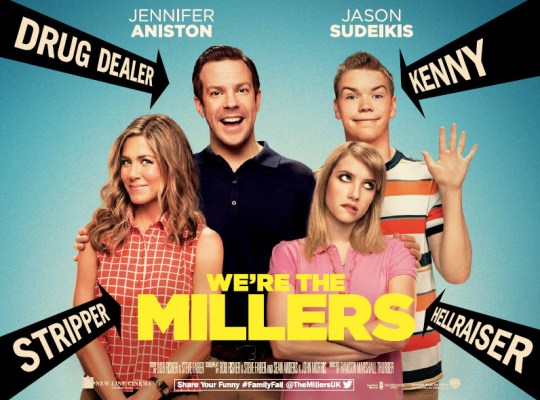 ‘But Jennifer was an amazing sport. She was very supportive and took care of me, and was aware that, being a 19-year-old kid in that scenario, I was very nervous,’ he recalled.

‘This was before intimacy coordinators, which I really would have appreciated, and I’m sure Emma and Jen would have, too.’

Will ended up winning the MTV Movie Award for best kiss with his co-stars in 2014, as well as picking up the accolade for breakthrough performance.

His role in the film also saw him win the EE Rising Star Award at the Bafta Film Awards.

One of the Black Mirror: Bandersnatch star’s latest projects is a TV adaptation of Agatha Christie’s Why Didn’t They Ask Evans?, adapted by Hugh Laurie and co-starring Lucy Boynton.

He told Metro.co.uk that it felt like a ‘rite of passage’ to star in a production based on a work by the Hercule Poirot writer.

Asa Butterfield stars in Netflix’s Choose or Die (Picture: CURSR FILMS LIMITED 2022) If I asked you to…
byBizLifetime
No comments

Get excited, because Disney has dropped the trailer for Pinocchio. Starring the likes of Tom Hanks stars as…
byBizLifetime
No comments