THINK of all the hellraisers from down the years and you might agree that Keith Richards is rock’s “main offender”.

Never one to shy away from his colourful past, the Rolling Stones legend chose the expression as the title of his excellent and underrated 1992 solo album with his OTHER band, the X-Pensive Winos. 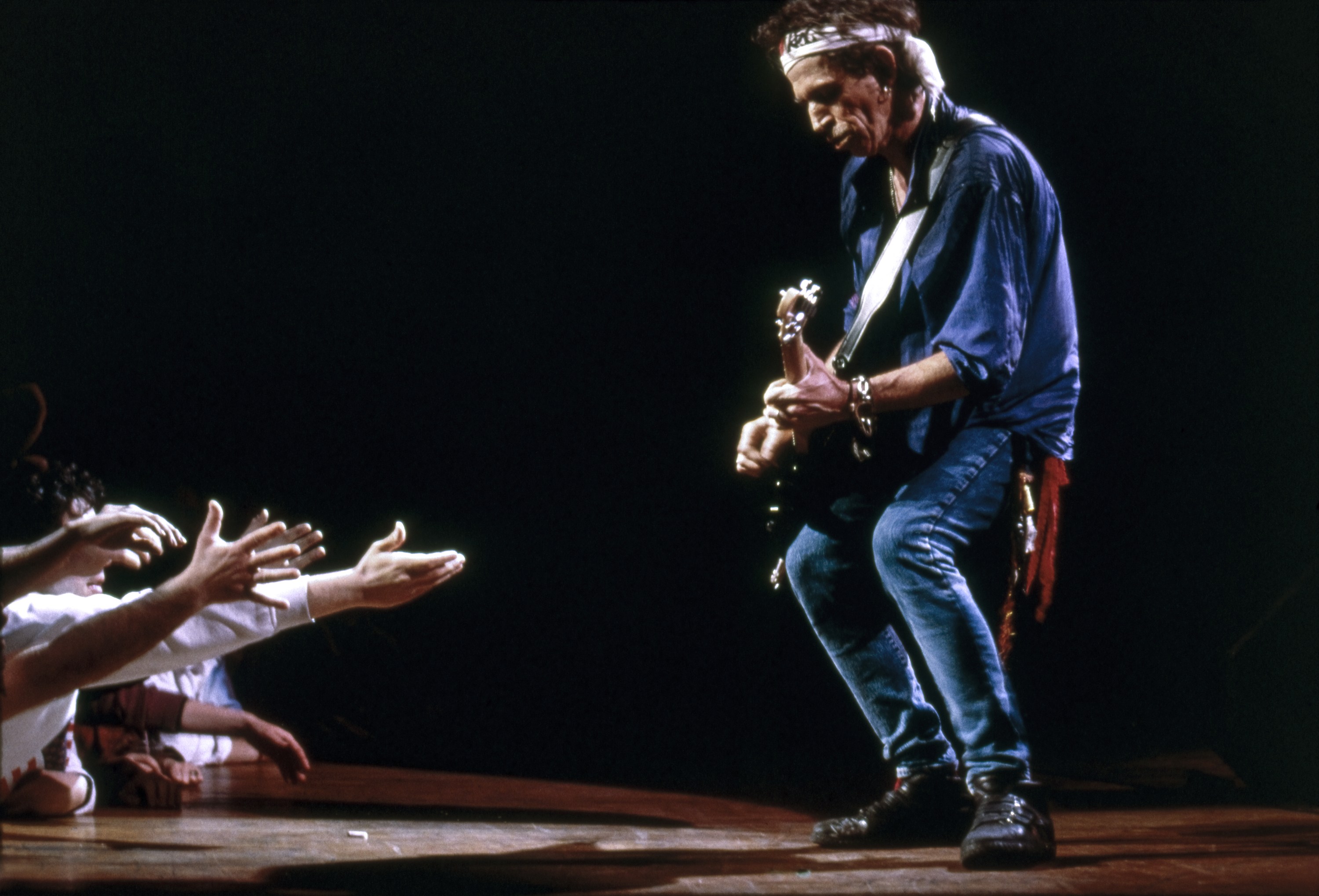 Now Main Offender is getting the full reissue treatment 30 years on, handing me another chance to talk to the loveable rogue.

Today, Richards can call himself clean-living, having cut out drugs, fags and, for the most part, booze — in that order.

But the old fire still burns when it comes to music, one of his great pleasures in life since bumping into Mick Jagger on platform two of Dartford railway station in 1961.

Let’s also not forget that he’s been devoted to wife Patti Hansen for more than 40 years. 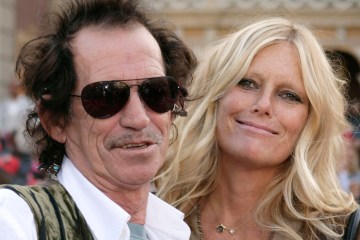 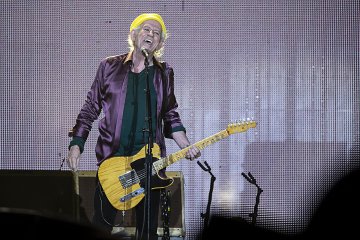 “She’s superb,” he once told me. “I wish all you guys could find one like mine because Patti is a piece of work.”

Speaking this week from his Connecticut home where the couple spend much of their time, I discover that the 78-year-old guitarist, songwriter and occasional singer is on a high from his latest live music endeavours.

Last Thursday, at New York’s Beacon Theatre, he reunited the X-Pensive Winos for a three-song set as part of the annual Love Rocks charity concert.

“It was great fun, man,” Richards tells me in that wonderfully lived in drawl.

“It was extraordinary to get the Winos back together. We haven’t played for years.”

They kicked off with a smoking 999, Main Offender’s lead track, followed by two Rolling Stones classics on which he’s always taken lead vocals instead of Jagger — You Got The Silver and Before They Make Me Run.

Richards continues: “This was a Winos 30th anniversary and we’ve got the Stones’ 60th this year, so we’re doing all right for anniversaries.”

Watching those three songs (check out the YouTube footage), the Winos’ chemistry is clear for all to see — more laidback than the Stones but special all the same.

“It’s one of those indefinable things,” muses Richards. “I guess that’s why you’re up there doing it and why people listen to it.

“I don’t have any idea where it comes from. When you’re playing with certain people, something just clicks. Perhaps it’s just our blood types,” he adds with a piratical cackle.

Not only is Jordan his chief Winos songwriting collaborator but also the musician entrusted with drumming for the Stones since the sad loss of Charlie Watts last year. Crucially, he comes with Watts’ blessing.

Also playing were other founder members, guitarist Waddy Wachtel and keyboard whizz Ivan Neville, but missing was bassist Charlie Drayton who’s on tour with Bob Dylan. His place was taken by “honorary Wino” Will Lee.

“They’re fantastic,” Richards affirms. “We just sort of flood in.

It’s one of those indefinable things. I guess that’s why you’re up there doing it and why people listen to it. I don’t have any idea where it comes from. When you’re playing with certain people, something just clicks. Perhaps it’s just our blood types.

Keith Richards on the chemistry of his band, the X-Pensive Winos

“I love the Beacon Theatre and, yeah, I’ve been on the phone with the Winos since the other night.

“Now we’ve all scattered back to our homes but we all really enjoyed it. We’ve been saying, ‘Come on, let’s do some more!’

“But, first things first man, I’ve got the Stones.”

‘I’m getting a fresh taste. I’m feeling it’

I’m talking to Richards on the very day that the Rolling Stones Sixty tour is announced, including two dates in London’s Hyde Park, one at Liverpool’s Anfield stadium as well as more shows across Europe.

The band’s first studio album since 2005’s A Bigger Bang is on the cards, too, so any further Winos activity is on hold for now.

But Richards would love to do more with them in the future. “I’m just getting a fresh taste for it,” he says. “I’m feeling it!” (Cue another endearing chuckle.)

For those who need reminding, here’s a quick refresher on Richards’ career outside the Stones.

In the Eighties, when Jagger pursued his solo dreams by recording 1985’s She’s The Boss, he responded to the enforced hiatus by doing his own thing too.

“Mick wanted to spread his wings and I wanted to do the same but I didn’t have any wings,” Richards explains.

“So Charlie Watts said to me, ‘If you’re going to work outside the organisation, Steve Jordan is your man’.” So the pair hooked up and hit it off immediately.

Now we’ve all scattered back to our homes but we all really enjoyed it. We’ve been saying, ‘Come on, let’s do some more!’ But, first things first man, I’ve got the Stones.

Keith Richards on future gigs with the Winos

First, they worked with Aretha Franklin on the title song of Whoopi Goldberg movie Jumpin’ Jack Flash and then on the Chuck Berry concert film Hail! Hail! Rock ’n’ Roll.

One thing led to another and the X-Pensive Winos were born, so called because the band downed a case of Richards’ 1936 Chateau Lafite Rothschild one evening when he was out.

In 1988, Richards released his acclaimed, high-octane solo debut Talk Is Cheap complete with a song to grace any Stones album, Take It So Hard.

He says: “Mick and I had been joined at the hip for more than 20 years and we both thought, ‘Let’s do what we want amongst ourselves and then get back together’. Which is obviously what happened.”

Next up for Richards was the Stones comeback album, 1989’s Steel Wheels, and a huge accompanying tour but he still had unfinished business with the Winos.

“We made Main Offender because we had so much fun doing Talk Is Cheap,” he says.

“Right after Steel Wheels, I said, ‘Let’s get the Winos back together!’ I loved the enjoyment of working with those guys.”

Memorable Richards riffs adorn other standouts such as Wicked As It Seems and Will But You Won’t, while the aching Hate It When You Leave bears one of his finest ever vocal performances.

I also see from the credits that the relaxed studio atmosphere produced some interesting results.

Mick and I had been joined at the hip for more than 20 years and we both thought, ‘Let’s do what we want amongst ourselves and then get back together’. Which is obviously what happened.

For instance, Richards swaps over to bass guitar on the chilled, near seven-minute Words Of Wonder which sounds as if it was beamed in direct from some backstreet Jamaican club.

One of the most rewarding aspects of the Main Offender reissues is the inclusion of a live show from London’s Town & Country Club.

“I was very happy we found that,” says Richards. “To me, it’s the treasure of the whole thing.

“It was one of the few, maybe even the only, London show the Winos ever did and  I hadn’t remembered us recording it.

“My thanks go to whoever went through the archives for nipping this one out because it makes the re-issue more meaningful and extra surprising.”

Listen to the live show and you can hear the Main Offender tracks blossoming alongside Stones songs Gimme Shelter, Before They Make Me Run (“a perennial wherever I go”) and Happy.

Richards says: “You write the song, you record it, you take it on the road and then the thing takes on a life of its own, you know.

“That’s the fascinating thing about what I do. Songs still keep growing and changing and there’s a freshness about them still, which is encouraging at my age.”

As for being a frontman, a role usually occupied by Jagger, Richards has come to admire his Stones bandmate a whole lot more than perhaps he once did.

“When I first worked with the Winos on stage, I thought, ‘Wow!’ ” he says.

You write the song, you record it, you take it on the road and then the thing takes on a life of its own, you know. That’s the fascinating thing about what I do. Songs still keep growing and changing and there’s a freshness about them still, which is encouraging at my age.

“Suddenly I got the message about being a frontman and a whole new appreciation of what Mick does.

“It’s non-stop if you’re at the front, whereas with the Stones I could discreetly pull back and hang with Charlie, then go forward when I chose.

“There’s no leeway when you’re the frontman and that took some learning. Well, there it is, I’ve said it. Hats off to Mick! I got it, Mick!”

If there had been some tension around Jagger and Richards’ first solo forays, it evaporated by the time it came to Main Offender.

“That whole period had a great vibe,” says the latter. “Because me and Mick had taken a break, we came back to each other with a certain new respect for what each of us does. I had a really good feeling on Steel Wheels and (1994’s) Voodoo Lounge. They were real pleasures to make.

“Maybe we realised how much we needed each other. By then, we had been doing nothing but the Rolling Stones for more than 20 years.

“It was a miracle we’d lasted that long and a bigger miracle that the hiatus was all that it was.”

As they roll into action again this summer, Richards reflects on the beast otherwise known as the world’s greatest rock ’n’ roll band.

“The Stones seems to be a creature with a life of its own,” he says.

“You don’t really have much control over it. It’s just a case of, ‘We’re going to do this, OK. Here we go again!’”

With all his commitments to the “day job”, Richards decides it’s no surprise that he didn’t make another solo album until 2015’s Crosseyed Heart.

For sheer endurance over an epic 60-year career, rock’s greatest survivor beats the likes of Ozzy and Axl to the title of “main offender”, hands down. 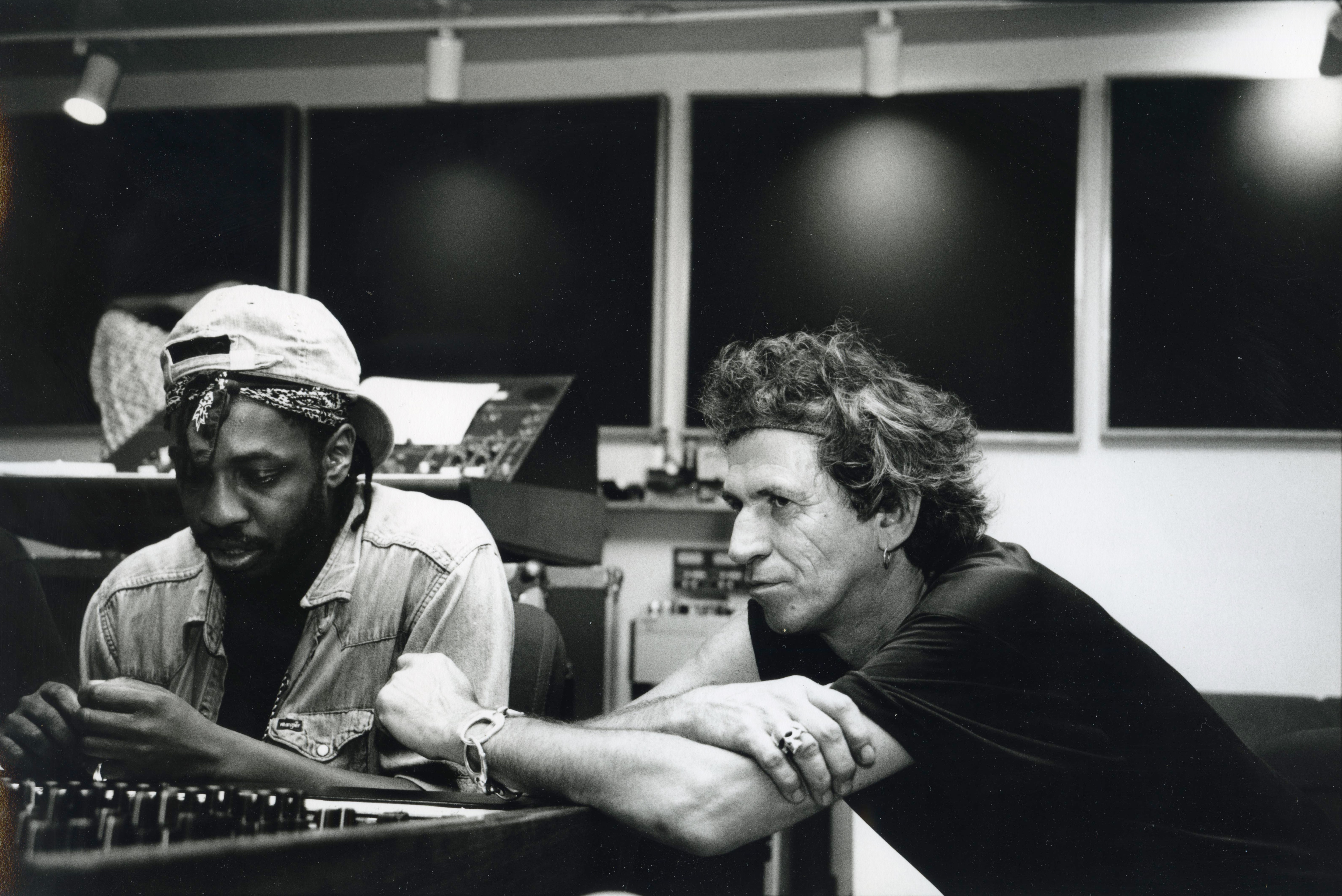 Lizzo has dazzled at the 2022 BET Awards, performing ‘About Damn Time’ from her forthcoming album ‘Special’. Her appearance…
byBizLifetime
No comments

Stagecoach, the California country music festival and sister event to Coachella, has banned Confederate flags from its 2022…
byBizLifetime
No comments

Nick Cave has narrated audiobook of ‘Faith, Hope And Carnage’

Nick Cave has announced an audiobook to accompany his new memoir Faith, Hope And Carnage, which he also…
byBizLifetime
No comments