The band remembered their ‘brother’ after replacing Foo fighters at a festival (Picture: Getty)

The Red Hot Chili Peppers honoured the late Taylor Hawkins at a festival by delivering a heartfelt speech dedicated to the drummer.

Foo Fighters star Hawkins died aged 50 back on March 25, during the band’s tour of Colombia.

Confirming the sad news in a statement, the band said at the time: ‘The Foo Fighters family is devastated by the tragic and untimely loss of our beloved Taylor Hawkins.’

‘His musical spirit and infectious laughter will live on with all of us forever.

‘Our hearts go out to his wife, children and family, and we ask that their privacy be treated with the utmost respect in this unimaginably difficult time.’

Following their bandmates death, Foo Fighters cancelled all of their tour dates for 2022.

The band were also scheduled to play at New Orleans Jazz & Heritage Festival this week, before Red Hot Chili Peppers replaced them as a headline act.

The Unlimited Love group took time to remember Hawkins during their set on Sunday night, and their drum kit had ‘Taylor’ written on the front.

After finishing their 17-song set, the band’s drummer Chad Smith dedicated their performance to Hawkins with a moving speech.

‘We just found out about this two weeks ago, because Foo Fighters were supposed to play here tonight,’ he began.

‘We love Foo Fighters, and we love our brother Taylor Hawkins. This means a lot to us to be able to play for them.

‘The guys in the band are here, they’re supporting. Taylor’s wife Alison and his whole family are here, we love them, we love Taylor.’

Smith then got the whole crowd to loudly chant ‘We love Taylor’ in a powerful moment.

The band’s drummer also spoke about Hawkins before hitting the stage, saying they were going to ‘play our hearts out’ in his honour.

Speaking to Billboard, Smith said their set would be a ‘celebration’ of the late musician’s life after speaking with his wife.

‘So we’re going to do all that and she’s going to be part of that and I’m very honoured that we can do that with her. We’re going to play our hearts out,’ he added. 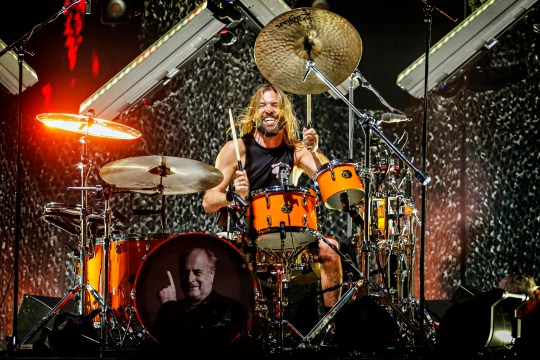 Smith went on to say: ‘Wherever he is, I feel strongly and believe that he is doing his Taylor Hawkins thing as only he can. He’s doing that somewhere else and giving that love and life to everybody wherever he is now that he did here.

Red Hot Chili Peppers and Foo Fighters have been longtime friends, first growing close after Foo Fighters supported the Chilis on their Californication tour in 1999.

Hawkin’s death sent shockwaves through his fanbase and the music industry, with tributes pouring in from around the world.

The star was found in his hotel room in Bogotá, just hours before his band were set to take to the stage on their South American tour.

A cause of death is yet to be confirmed, but an initial toxicology report carried out last month found that Hawkins had multiple drugs in his system, including opiates, antidepressants and marijuana, when he died.

Liverpool four-piece Crawlers have announced a UK headline tour set to kick off this October, after their debut…
byBizLifetime
No comments

Dua Lipa says Jack Harlow’s song about her is “OK, I suppose”