“This is great for London and for culture”

Following the grand re-opening of KOKO in London, the bosses behind the iconic venue have spoken to NME about the improvements made and what it means for music fans, artists and culture in the city.

Before relaunching as a “50,000-square foot state-of-the-art live music venue and broadcasting house”, the venue (located on 1A Camden High Street) initially shut in 2019 for a planned one-year refurbishment. Those plans were scuppered after a fire broke out at the venue in January 2020 with the coronavirus pandemic and “colossal water damage” further holding up progress.

This week (Friday April 29) saw Arcade Fire play the first gig back at the newly renovated Camden venue to launch their upcoming album ‘WE‘, before Luciano headlined the first ‘KOKO Electronic’ night the following evening to celebrate the venue’s major £70million renovation.

We had @arcadeFire open our theatre last night – a phenomenal, truly moving performance from one of the world’s best live acts. #KOKOLondon is #open

Olly Bengough founded KOKO in 2004 after transforming the venue from the Camden Palace. Speaking to NME, he said that it the latest iteration “pieces together 222 years of London history” while “looking to the future” in taking in the neighbouring former Hope & Anchor pub at the rear (built in 1860) to become Cafe KOKO and a former piano factory from 1800 to become the new five-storey House Of KOKO members’ club.

“In the ’60s you had the Stones play here, the ’70s it was The Clash and Sex Pistols, AC/DC and Iggy Pop, in the ’80s we had Madonna‘s first London show, Prince performed, we had the new romantics like Spandau Ballet, Duran Duran and Boy George, then in the ’90s it was the likes of Blur,” he said of the venue’s legacy.

“When I founded the theatre in 2003, Amy Winehouse was just coming through, we were lucky enough to do Coldplay‘s ‘X & Y’ album launch and Madonna came back for her ‘Confessions On A Dance Floor’ album. Regardless of who’s owned it, the theatre has always hosted amazing artists and represented both the world and London’s culture at its best. It’s never been corporate and always owned by independents and entrepreneurs. We’re always mindful of that.”

As for the main venue, Bengough said that many improvements had been made to satisfy gig-goers and audiophiles.

“We stripped back the theatre to its brickwork, which took three years because it hasn’t been renovated like this since 1900,” he said. “All of the bars are beautifully designed, and on the audio side we’ve got an amazing D&B 3D soundscape system. That’s the first time in the world that it’s been brought into a venue, so I think everyone is going to be surprised at the level of the audio and sound.”

He continued: “During construction, we found a fly tower space. Every theatre has one, and it’s where stage-hands pull the scenography between scenes. It’s very tall but the public never see it. We’ve now built a gallery around it which, with the stage curtain, means that we can operate that as a 150 capacity venue. What’s fun is that now artists can play KOKO, they can play the fly tower, or some artists are talking to us about playing both in the round. That’s incredible for us – we now have three different performance set-ups.” 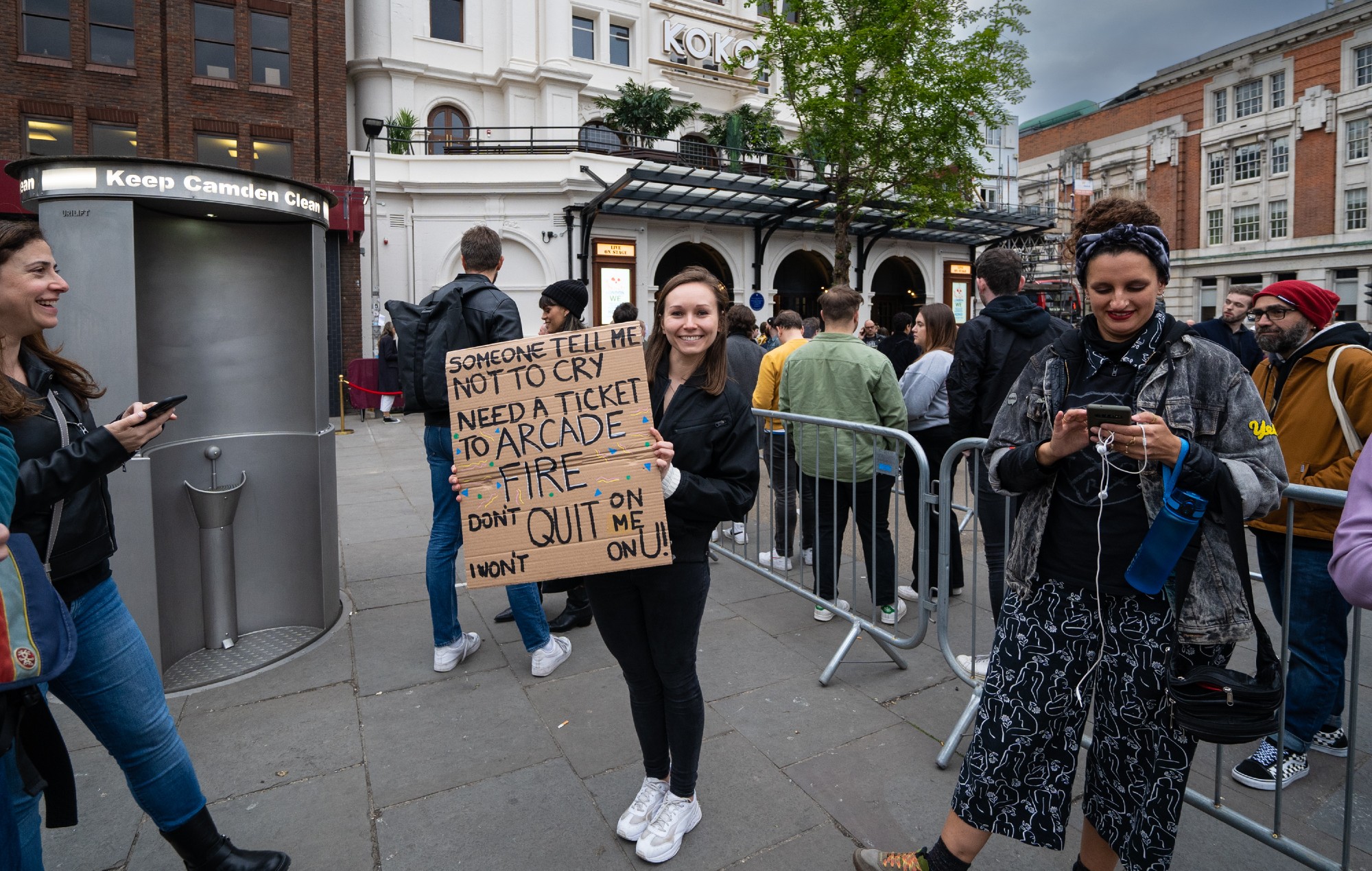 An Arcade Fire fan pleads for a ticket outside KOKO on April 29, 2022 in London, England. CREDIT: Lorne Thomson/Redferns

In bringing Cafe KOKO and the House Of KOKO into the realm of the main venue, Bengough said that they were able to welcome around 1,000 artists per year “in different spaces that everyone can be part of” through performances and livestreams.

“It’s great for us, but it’s also great for London and culture,” he said. “KOKO’s always there and people can always buy a ticket to a show. The House Of KOKO gives our community the opportunity to become a member if they want to experience backstage and enjoy a little more luxury. That means there are five floors where they can entertain their friends and their guests, we’ve built a 40-cap jazz club speakeasy with Nick Lewis from Ronnie Scott’s programming that.

“We’ve got this incredible townhouse where you can go and watch shows in the theatre, or you can go to our new small gig space Ellen’s and watch a show, you can go to the studio where we’ll have listening parties and events, radio station facilities to showcase emerging talent, plus we’ve got vinyl-listening booths for anyone who really enjoys and loves music.

“Quite a few musicians, artists and actors have joined – so it’s great to have that artistic community support us.” 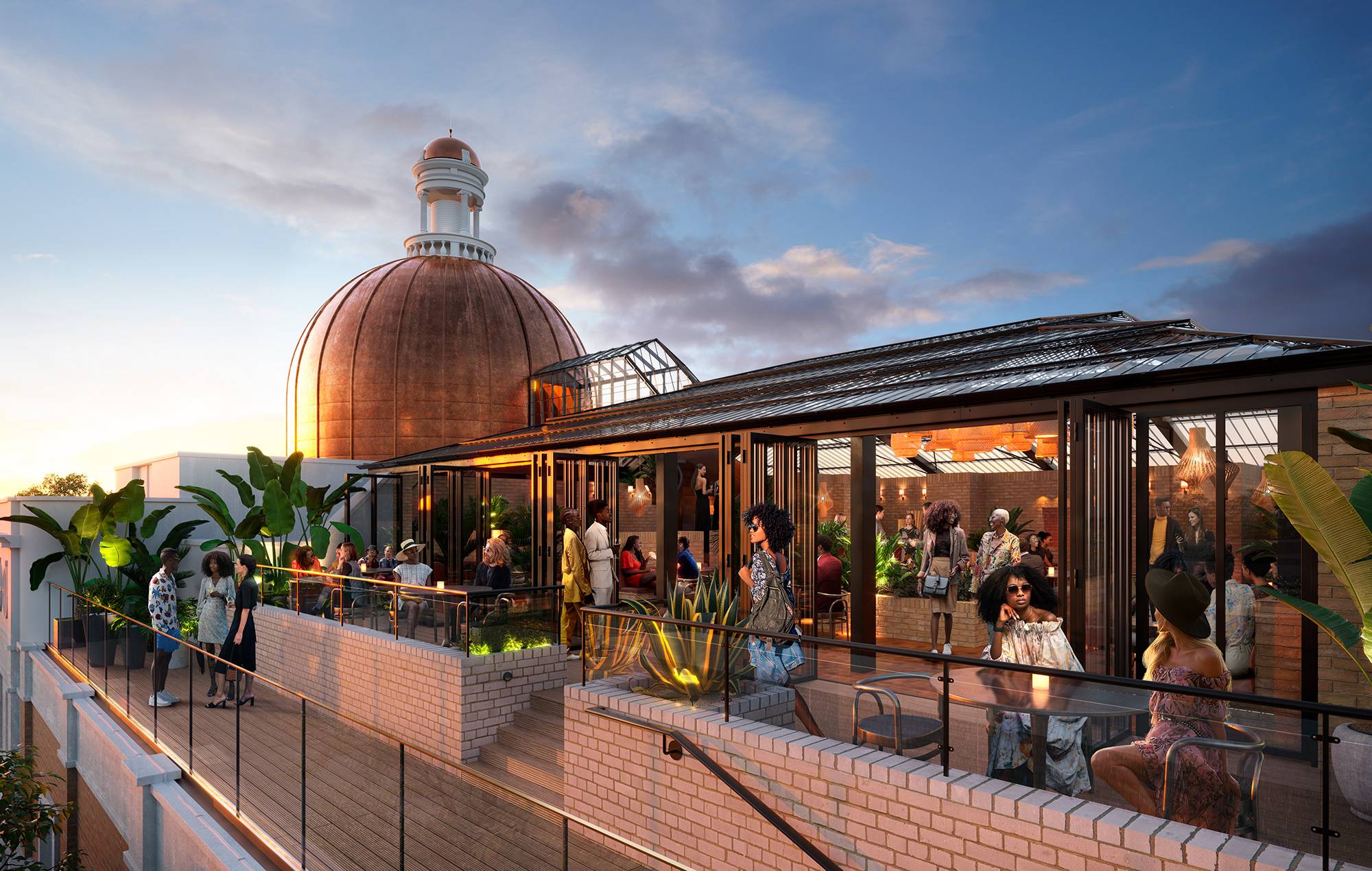 The new rooftop of KOKO in London (Picture: Press)

Music fans around the world can also now enjoy KOKO with 4K streaming enabled throughout the building.

“Now an artist can play an analogue show where they don’t have to stream, or if they want to stream and distribute their show or backstage elements to their audience globally, they can now do it at the push of a button,” said Bengough.

“They don’t have to bring in any production companies. We’ve increased artists’ creative perimeter, so they can come and perform big shows, small shows, they can stream and create limited edition content. We’re here to support them and make them look good at every level.”

In the coming months, KOKO will see appearances from the likes of Pete Doherty, Jorja Smith, 2ManyDJs as the venue looks set to welcome around 45,000 fans in May alone. The venue’s head of music Nick Lewis told NME about KOKO’s mission to continue its role as “a cultural institution that supports all new music movements including genres that perhaps other venues might shy away from”.

“KOKO has witnessed so many musical movements throughout its history which is really quite special,” he said. “From new wave and punk with seminal gigs by The Clash, The Jam, The Cure, to the new romantic era with Iggy Pop, Duran Duran, Ultravox, Boy George, and it was also a centre for the rave and acid-house scene in the late ’80s and ’90s.

“Over the course of time KOKO has hosted some of the most iconic artists from Madonna and Amy Winehouse to Kanye, Stormzy and Dua Lipa, to name a few. When the theatre first opened in 1901, Charlie Chaplin performed on its stage, then later Monty Python and The Goon Show were broadcast from the building when it was owned by the BBC from 1945-1975. The Rolling Stones did their first ever live broadcast from the stage in 1964.

“It’s such a special, majestic theatre where countless unforgettable music-loving memories have been formed.” 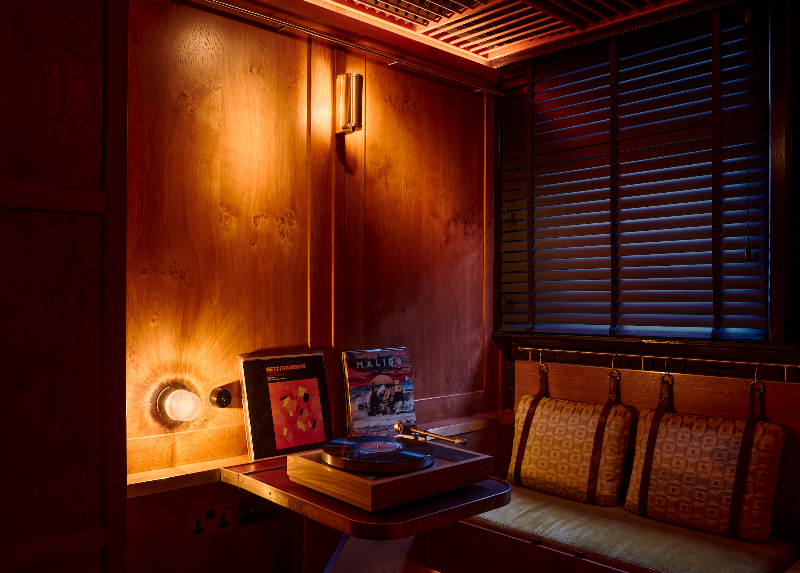 A vinyl room in The House of KOKO. Credit: Lesley Lau

Speaking of the “meticulous three year restoration process”, Lewis said that music fans would notice the years of love and effort that have gone into transforming the venue.

“Fans watching a show at KOKO always felt the grandeur of the theatre, but when we re-open I think it’s going to be an even richer experience,” he said. “We’ve vastly improved the sound and lighting, added high spec viewing screens on the top floor, put in more bars to get a (good) drink, and with live streaming integrated throughout, we will be producing hybrid events for those who can’t make the gig in-person.  But most importantly, I’m proud of our eclectic opening music programme and I hope NME readers approve of it too!”

As for the House Of KOKO and Café KOKO, Lewis said that they’d be looking to honour Camden’s “rich local history that’s synonymous with independent music”.

“We’ll be doing that by supporting the most exciting, emerging, local talent throughout the building, including in the ground floor Café KOKO as well as our new stages in the members’ areas,” he said. “We want to ensure we’re working with the local community and doing justice to the venue’s history. Music fans should expect the best local and emerging live music and DJ’s throughout the building.”

He continued: “Artists will have the option to make their visit really special in a number of ways. Maybe they want to take over our new KOKO shop for the day as part of their album launch, or livestream their performance to their fans worldwide, or perhaps create a VIP show to a select few fans in our new ‘fly tower’ venue within the theatre. Our new on-site studio ‘KOKO Studios’ will run live radio supporting new talent and will provide artists with filming and recording facilities so there’s also an option for artists to get creative with us.”

Admitting that his dream night at KOKO would feature a Nick Cave solo piano set alongside performance from D’Angelo Quartet with Pino Palladino, Anderson. Paak , Kate Bush and FKA Twigs followed by a Brainfeeder Club Night, Lewis said that the venue’s mission in booking shows was to “honouring the theatre’s rich history whilst also innovating across all genres”.

“I’d like to take this opportunity to thank all the artists, agents, promoters and managers who we’ve been working with and have booked one of the first shows back with us,” he added. “This whole thing wouldn’t work without them –not least Arcade Fire for being the first ones back!”

Conor Oberst has reportedly walked off stage during a Bright Eyes gig. According to reports from fans at…
byBizLifetime
No comments

Marcus Mumford has today (August 25) shared a new single, ‘Better Off High’ – check it out below.…
byBizLifetime
No comments