Alison Hammond recalls being called ‘a Black host’ on This Morning

Alison and Dermot O’Leary have hosted the Friday slot for over a year (Picture: Rex)

Alison Hammond has recalled being referred to as ‘a Black host’ when she first took over her This Morning slot with Dermot O’Leary, saying that it was ‘really upsetting’.

In January last year, Alison and Dermot made their debut as joint hosts on the Friday edition of the ITV programme, taking over from Eamonn Holmes and Ruth Langsford.

At the time, viewers praised the duo on their fun dynamic, but behind-the-scenes, the nerves had set in before they arrived on screen.

During a recent podcast appearance, Alison, 47, explained that it was ‘tough’ when her new role was first announced, having been a presenter on This Morning since 2003.

Speaking to Lorraine Kelly and her daughter Rosie on their podcast What If?, the National Television Award and Bafta TV Award nominee said that she ‘got a lot of flack doing that job because obviously my friends were doing it beforehand’, referring to Eamonn and Ruth.

‘It was tough to do it. And Eamonn and Ruth told me to go for it. I’ll tell you what was really upsetting, like I can remember reading an article, and it was the first time that I’d become just a colour, because it said: “Black host replaces Eamonn and Ruth,” and it really upset me,’ she recollected. 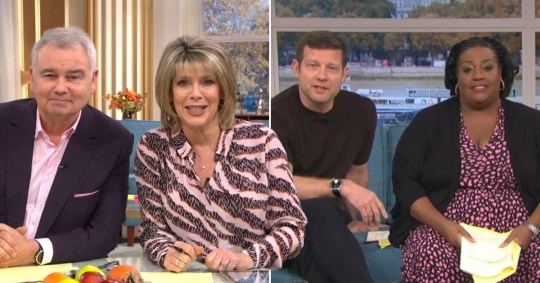 Alison said that her predecessors Eamonn and Ruth told her to ‘go for it’ (Picture: Rex)

‘That was the first time I thought, “Oh my gosh, I’m just a colour. I’m nothing else. I’m not Alison Hammond anymore,” which I’d always been. I just became a Black host.’

Alison said that she found the experience ‘quite shocking and quite upsetting’, having been feeling a lot of ‘stress’ before her first show.

‘I was really nervous, but I overcame it and it’s been ok,’ she added.

While Alison and Dermot now get on like a house on fire, the pair have previously opened up about the teething period they had when they first started.

During an interview on Lorraine, Alison explained that they were ‘thrown together, like an arranged marriage’, with it taking two months before they felt comfortable with each other.

‘We told each other what we don’t like, we were so honest with each other and I think that’s why it worked,’ she said.

‘We had a few private chats – “I don’t like this about you; well I don’t like this when you do such and such.” All really tiny small things but the fact we were honest and able to talk to each other, I think that’s why it’s worked.’

This Morning airs weekdays from 10am on ITV.

TEEN Mom Kailyn Lowry has revealed her friend was in a cult, leading fans to believe she was…
byBizLifetime
No comments

LOVE Island star Molly-Mae Hague has revealed her sister managed to give her a secret, and very important…
byBizLifetime
No comments

Table of Contents Hide ‘FILTERED!’FRESH FACEDKYLIE BARES ALLWe pay for your stories! KRIS Jenner has shown off her…
byBizLifetime
No comments