Lisa is going to be living the dream with Billie (Picture: Getty/Disney)

Billie Eilish has become the latest A-lister to guest star on The Simpsons, joining the cast of the animated sitcom for a special Disney Plus short.

Anyone familiar with the cartoon will be well-aware that among her many skills, Lisa Simpson, the second eldest child in the family, is a talented saxophonist, who loves to jam along to the blues.

Well, in the greatest testament to her musical skills, Lisa is set to be discovered by Billie and her brother Finneas O’Connell while searching for a quiet place to practise her instrument.

After catching wind of Lisa playing some tunes, the multi-Grammy Award-winner invites the youngster to her studio so they can take part in a special jam session together.

We’re sure there are plenty of Billie fans out there who would leap at the chance to take Lisa’s place.

Several expressed their excitement over seeing the chart-topping transform into a Simpsons character, with one tweeting: ‘BILLIE IS A REAL SIMPSONS CHARACTER OMGGG.’ 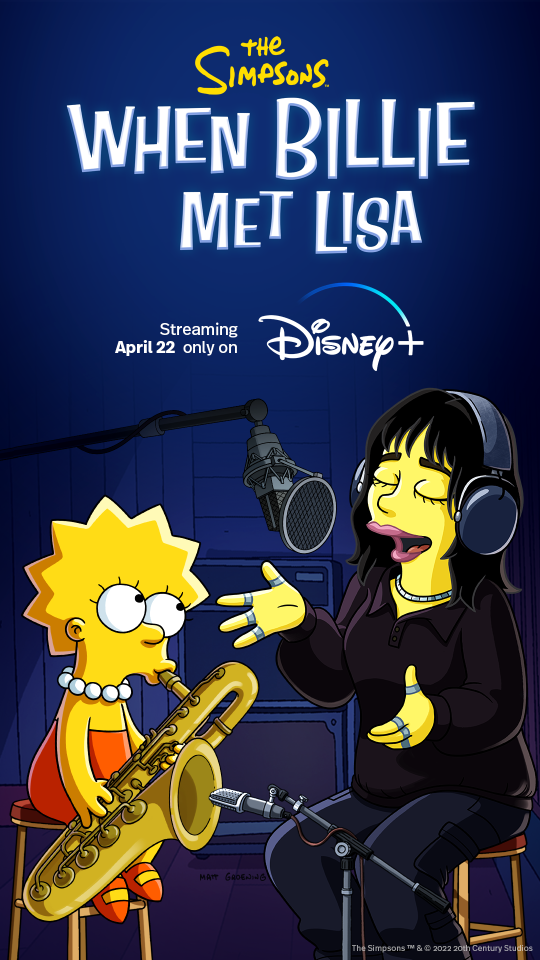 Lisa and Billie is the musical duo we didn’t know we needed in our lives (Picture: Disney Plus)

‘Did y’all have “Billie Eilish becomes a Simpsons character” on your 2022 bingo cards,’ another asked, while someone else wrote: ‘BILLIE ACTING. BILLIE ON THE SIMPSONS. WHAT.’

Billie joins a string of celebrities who have previously played themselves on the TV show, from late Star Trek star Leonard Nimoy to The Office creator Ricky Gervais.

Last month, The Weeknd shared a first look at his guest role on the show, playing two characters, rather than making a cameo on himself.

The singer portrayed a famous child influencer who owns a skatewear brand, as well as voicing his father, tweeting that it was a ‘dream come true’.

Meanwhile, last year, season 33 of The Simpsons opened with the first ever all-musical episode on the series, starring Frozen actor Kristen Bell.

‘The premiere this year is the most musical episode we’ve ever done – almost wall-to-wall music,’ executive producer Matt Selman informed fans at a Comic-Con panel ahead of the premiere.

‘It’s like a Broadway musical of an episode, with all original songs, and we’ve got Kristen Bell playing the role of Marge’s singing voice. We all love Marge’s voice [Julie Kavner], but this is the singing voice that’s different, let’s just say.’

Billie’s appearance on The Simpsons is the fourth in a collection of shorts created exclusively for Disney Plus, the previous ones being ‘Maggie Simpson in The Force Awakens from Its Nap’, ‘The Good, The Bart, and The Loki’ and ‘The Simpsons in Plusaversary’.

The Simpsons is available to watch on Disney Plus.

I’m humiliated, can’t sleep and trust NO-ONE after scammer robbed me of £30k – I still hear his voice

Whenever Love Island comes around, fans always make a point of expressing how much they dislike hearing the…
byBizLifetime
No comments