Bowling For Soup on scrapped WrestleMania plans with Alexa Bliss

The quartet were lined up for a performance of a lifetime (Picture: Jodi Photography)

Jaret Reddick has revealed Bowling For Soup were meant to play Alexa Bliss to the ring at WrestleMania 36.

The pop punk legends – whose hit single named after the WWE superstar features on their upcoming 11th studio album Pop Drunk Snot Bread – dropped a video for the track in 2020, and all signs were pointing to a performance at the Showcase of the Immortals.

‘It was gonna happen, but Covid,’ Jaret exclusively told Metro.co.uk, noting how that year’s WrestleMania ended up taking place at the Performance Center in front of an empty room.

‘That was our year, that would’ve been the time. The song was popping, everything was going great. It was being talked about that we would bring her out for WrestleMania and play, that was gonna obviously be the exclamation point on all of it.

‘Then Covid shut it down and, like you said, it really wouldn’t make sense because her character is so different now. But look, worse things came out of Covid for a lot of people so I try not to dwell on it. It’s a bummer, but…’

Jared may not have been able to be part of Alexa’s WrestleMania moment, but he was a surprise musical guest at her and Ryan Cabrera’s wedding over the weekend. 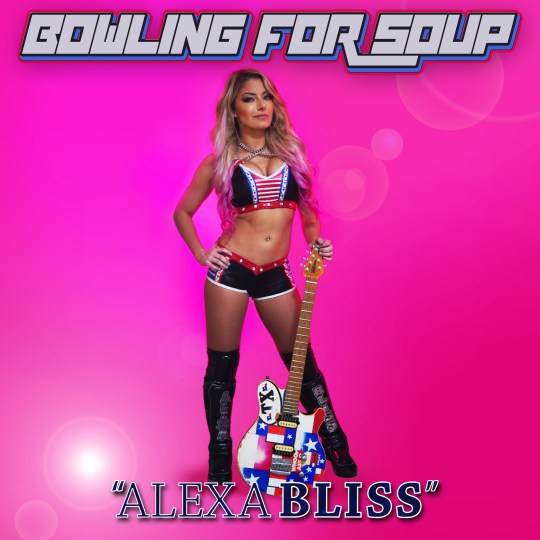 Little Miss Bliss is a huge BFS fan, and the Girl All The Bad Guys Want hitmaker has revealed the role he played in bringing the newlyweds together.

‘She’s actually engaged to one of my oldest music friends in Dallas, Ryan Cabrera, which is wacky,’ he said before the big day. ‘Actually, I was the topic of conversation when they started texting.

‘They just told me that the other day. They were like, “We wouldn’t be engaged if it wasn’t for you. We started texting, and we were talking about you.” I’m like, “OK well I take full credit for this!” ‘

Alexa Bliss isn’t the only big name to get referenced on Bowling For Soup’s upcoming album, with I Wanna Be Brad Pitt being pretty self-explanatory, while The Letter 3 (Sitcom Song) has a nod to George Clooney’s time on ER.

‘The biggest compliment I’ve ever gotten is somebody else saying, “Man I tried to write a witty nostalgia song and that’s really hard to do!” I’m like, yeah ’cause if it were easy, everybody would do it,’ he laughed.

‘So, I for some reason have the ability to write these silly songs but in a way they’re not cheesy. Just the right touch lyrically so people can get the tongue in cheek aspect of it but still respect us as a band – at least a little bit.’

Before the new album drops, Jaret – who has also kept busy with his first ever country record, Just Woke Up, which is out now – will be joined by the Bowling For Soup boys for a live run across the UK with The Dollyrots and Lit. 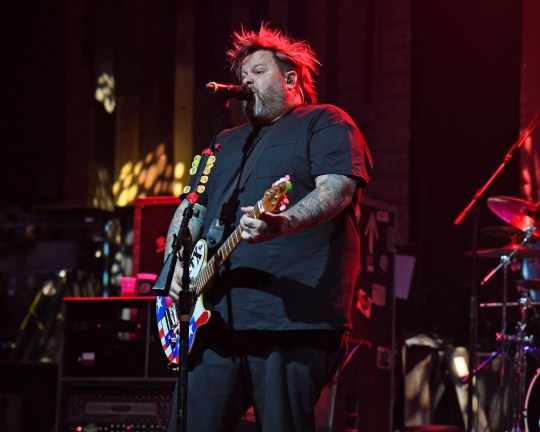 Jaret and BFS hit the road across the UK this week (Picture: Larry Marano/Rex)

It comes at a time where the singer appears genuinely happy in a fantastic place, and he’s ‘excited’ for the future.

‘Thank you! And you’re not the first person that’s said that to me today, so I just want you to know I appreciate that. I’m in a really good spot,’ he smiled. I love the music that’s coming out, both records.

‘I am anxious to get back on the road with Bowling For Soup. My kids are doing great, my wife’s doing great, so no complaints here.’

He wants to make up for lost time, while noting that the pandemic – despite having its challenges – still presented some opportunities for him personally.

‘I feel like there’s just two years missing that we just didn’t get to have. Some good came out of it,’ he confessed. ‘We got two great records, and got to spend a lot more time with my youngest son than I would have that it not happened.

‘You know me, I just try to be positive all the time. I’m excited for everybody to hear all this frickin’ music I’ve been working on for so long!’

Stranger Things star David Harbour has revealed what song would save him from Vecna, the central villain in…
byBizLifetime
No comments

Days Of Our Lives fans have been left fuming as the programme’s final ever episode on NBC, before…
byBizLifetime
No comments

The Games: Christine McGuinness sobs after opening up on autism