Viewers were in utter shock when the actor showed up on screen (Picture: Jim Spellman/WireImage)

The creator of Derry Girls, Lisa McGee, has revealed the code name they had for Liam Neeson on set to conceal his cameo, after his unexpected guest role left fans ‘screaming’.

In the opening episode of the Channel 4 show’s third and final season, Erin (Saoirse-Monica Jackson), Clare (Nicola Coughlan), Michelle (Jamie-Lee O’Donnell), James (Dylan Llewellyn) and Orla (Louisa Harland) were caught by police after breaking and entering into their school.

They had been trying to find out how they’d done in their GCSEs before the results day… but ended up accidentally abetting a robbery and finding themselves in a police interrogation cell.

It was there that they came face-to-face with Chief Constable Byers, played by none other than the Taken and Batman Begins actor himself.

Viewers couldn’t believe their eyes when Liam came on screen, with some admitting that they initially thought it was Line of Duty’s Adrian Dunbar, who plays police officer Ted Hastings on the BBC drama. 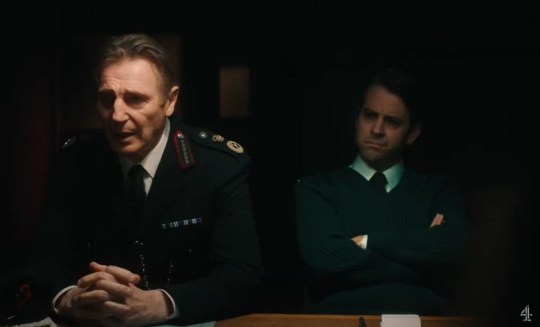 Of all the actors to come out of the shadows… (Picture: Channel 4)

After the episode aired, Lisa, who wrote the series, disclosed how they referred to Liam behind the scenes to keep his identity under wraps.

‘Thanks for watching lads! Our code name for Liam during the shoot was ‘ the big fella’ arguably quite an easily cracked code,’ she tweeted.

‘What an honour to have him in our wee show. Our very own Northern Star.’

Considering Liam’s height is said to measure at around 6’2″, sounds like a pretty apt code name.

Thanks for watching lads! Our code name for Liam during the shoot was â the big fellaâ arguably quite an easily cracked code. What an honour to have him in our wee show. Our very own Northern Star

One Twitter user joked that they ‘nearly fell over’ after he appeared on the programme, while another quipped: ‘Truly the best cameo I’ve seen in a show in a long time.’

Someone else praised the fact that his role was kept a complete secret with no leaks, writing: ‘Nothing stays a surprise in TV or film anymore, that was AMAZING.’

Following his stint on Derry Girls, Liam released a statement saying how ‘delighted’ he was to join the cast for their final outing.

The gang found themselves in a spot of bother with the police ahead of their results day (Picture: Channel 4)

‘I was delighted to be able to play a wee part of the final series of Derry Girls. I’m a huge fan of the series, the talented Lisa McGee’s incredible writing and the superb ensemble cast,’ he said.

‘It’s such a unique and special show with real heart and amazing to see the lives of ordinary, funny people living in Northern Ireland during The Troubles played out in a Channel 4 comedy. It was lovely to be back filming there and having fun with them all.’

Derry Girls returns next Tuesday at 9.15pm on Channel 4 and is available to watch on All 4.

FARRAH Abraham has claimed she was offered $5,000 to sell a jar of her own poop on OnlyFans.…
byBizLifetime
No comments