Of all the actors we expected to join the cast… (Picture: Samuel de Roman/WireImage)

Derry Girls viewers have been left shocked to their core after Liam Neeson casually showed up in a mind-boggling cameo in the first episode of season 3.

In the premiere, Erin (Saoirse-Monica Jackson), Clare (Nicola Coughlan) and the rest of the gang found themselves in a spot of trouble (what’s new?) when they tried to break into their school to find out their GCSE results.

Of course, their plan went anything but smoothly, when they not only inadvertently helped a couple of men stage a burglary of computer equipment, but then ended up being caught by the police.

While being questioned at the police station, the Taken star showed up out of the blue as Chief Constable Byers, a local member of the police force who interrogated the gang over their misdemeanour.

In the end, Erin’s dreary great uncle Colm (Kevin McAleer) helped get them out of their spot of bother… with viewers left reeling by Liam’s unexpected guest-starring role.

‘Literally screaming at Liam Neeson on #DerryGirls,’ one person tweeted.

‘They’ve only gone and got Liam Neeson,’ another said about the Northern Irish actor’s cameo, while another added: ‘Well knock me down it’s LIAM NEESON.’

Several admitted they hoped they’d hear him say his iconic line from Taken, with one person writing: ‘Wonder will he deliver that legendary line?!’

Some also admitted that when they first heard the police officer’s voice in the shadows, they believed it was none other than Ted Hastings star Adrian Dunbar, known for his piercing interrogation technique on Line of Duty. 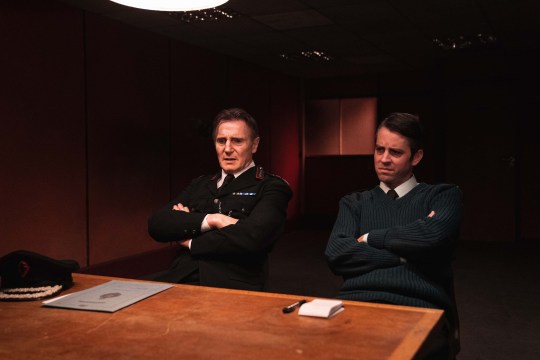 The actor said he was ‘delighted’ to appear on the show (Picture: Channel 4)

‘I was half expecting the Jesus and wee the donkey guy from Line of Duty but Liam Neeson rocking up is brilliant,’ a viewer stated.

‘When you think it’s Ted Hastings and then his face comes out of the shadow and it’s LIAM NEESON,’ another chimed in.

While Adrian didn’t show up, the continued mentions of a tape during the police interrogation – or lack thereof – also prompted viewers to draw Line of Duty comparisons. 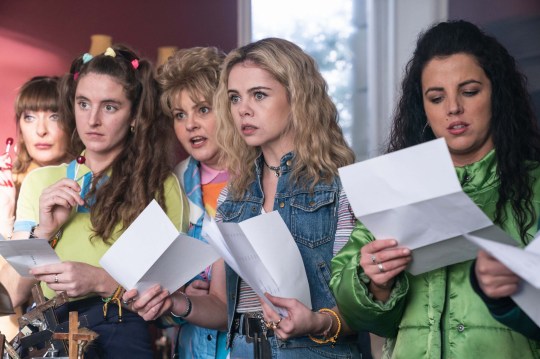 The gangs’ attempt to find out their GCSE results ahead of time lands them in hot water (Picture: Peter Marley/Channel 4)

Liam said he was ‘delighted to be able to play a wee part of the final series of Derry Girls’, saying that he’s a ‘huge fan of the series, the talented Lisa McGee’s incredible writing and the superb ensemble cast’.

‘It’s such a unique and special show with real heart and amazing to see the lives of ordinary, funny people living in Northern Ireland during The Troubles played out in a Channel 4 comedy,’ he said.

‘It was lovely to be back filming there and having fun with them all.’

Derry Girls returns on Tuesday at 9.15pm on Channel 4 and is available to watch on All 4.

Below Deck: Eddie Lucas confirms exit ahead of season 10

Countdown: Anne Robinson to be ‘replaced temporarily by Colin Murray’

Is there trouble ahead for Andrew Le Page and Tasha Ghouri? (Picture: ITV/REX/Shutterstock) It was all going so…
byBizLifetime
No comments