“Give Her A Call, I Want To Talk To Her”: Keanu Reeves Goes Out Of His Way To Make His 80-Year-Old Fan’s Day

Keanu Reeves. Feeling happy already? Thought so. He’s a man that needs little introduction, but we’ll give him one anyways. Keanu is well-known for both being an exceptional actor and for being one of the kindest Hollywood stars out there. Whether he’s helping the crew move heavy equipment up a huge flight of steps, or taking public transport instead of hiring a private driver, or taking a pay cut on movies such as The Matrix to help the crew get paid more, or donating money to charity… The list goes on.

Reeves has always stayed humble, treating everyone the same way he would like to be treated. However, what puts the cherry on top is his appreciation for his fans. A story has been circulating around the internet of him once calling a stranger’s 80-year-old grandma just to lift her spirits and this is the story we’ll focus on today. Let’s get into it!

Keanu Reeves is one of the most respected and beloved Hollywood actors, but what he is most famous for is his kind-hearted nature

Keanu Reeves rose to fame in the 1990s with movies like Speed, Bill & Ted’s Excellent Adventure, and, of course, the cult classic, The Matrix. But what may be more celebrated than his career achievements are his continuous acts of kindness, and some even say this human quality is WHY Keanu is so successful. Somehow he’s managed to avoid the problematic nature stardom brings with it, and where some point to his problematic youth and tragic history, others note his philosophy in general. 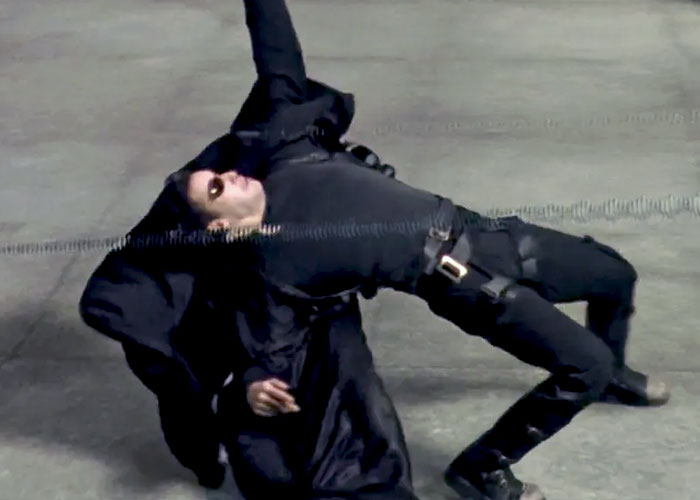 It all stems from his down-to-earth perspective on life and his appreciation for his fans, especially the 80-year-old ones 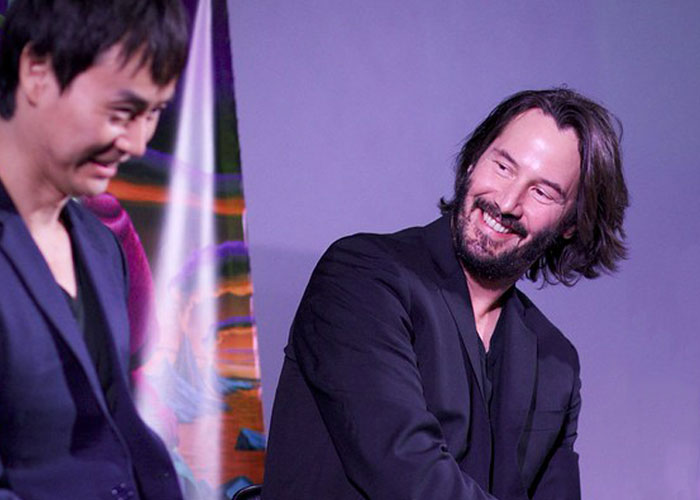 According to Medium, in a 2006 interview, he revealed money means nothing to him: “I’ve made a lot of money, but I want to enjoy life and not stress myself building my bank account. I give lots away and live simply, mostly out of a suitcase in hotels. We all know that good health is more important.” And this is where we get into the story that brought us to speaking about Keanu in the first place—the call to his 80-year-old fan.

A response on Reddit, retelling a time Keanu called an 80-year-old grandma in order to lift her spirits, has touched the internet 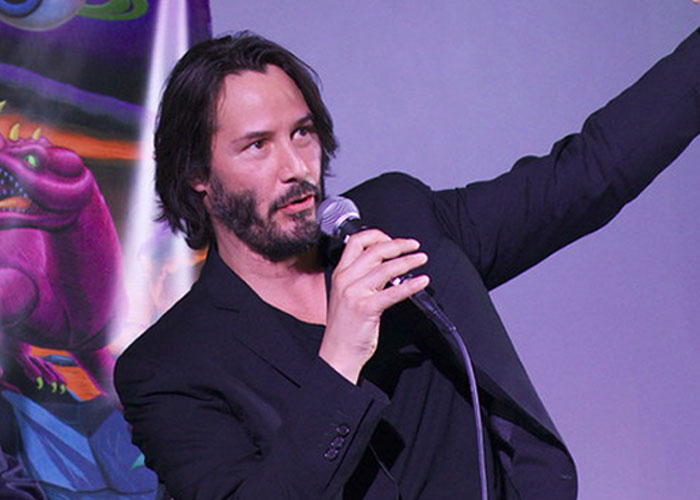 Redditor PerspectiveMedical71 created a thread asking people to share stories of things a celebrity had done that completely changed their perception of the stars. Lots of the stories were negative, rudeness, awful remarks, and blatant disrespect permeating the thread. But then there was this story about Keanu and a grandma who adores him.

A Reddit user called afdc92 commented, recalling his grandmother’s crush on Keanu Reeves because of his resemblance to his grandfather when he was young. Grandma saw every movie that had Keanu in it, “from Bill and Ted to the Matrix.”

Grandma’s been a fan of Keanu’s ever since his first movies, reminding her of the love of her life

Sadly, she had a stroke in her early 70s and was pretty much housebound for the last 10 years of her life, so watching movies was her main hobby. The films became her new friends because she so rarely got to see any of her own.

Soon after the Matrix came out, the commenter’s uncle was in Los Angeles for business and was eating at “a really swanky restaurant” when Keanu came in. After the meal, the uncle came up to their table and said: “I don’t usually do this, but I just wanted you to know that my 80-year-old mother loves you and has seen all of your movies. You remind her of my dad.”

She’d become housebound in her early 70s after a stroke, leaving her isolated 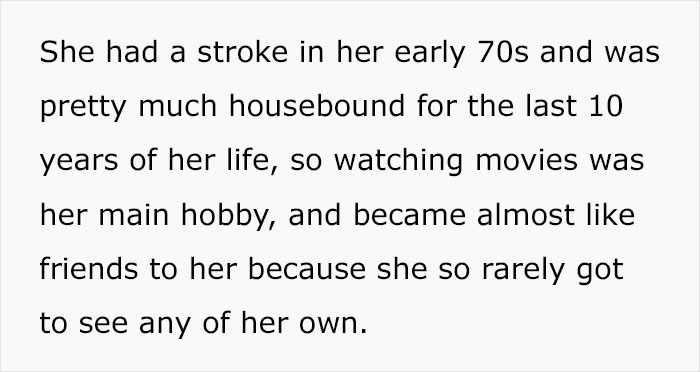 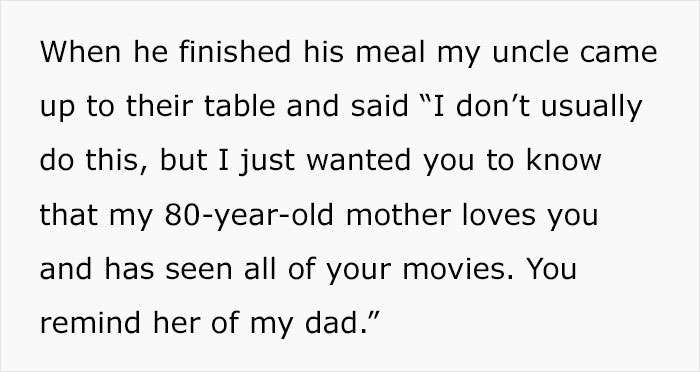 Keanu asked if the man had a cell phone and the uncle confirmed he did. Keanu said “give her a call, I want to talk to her.” He spoke with the grandmother for several minutes and “it absolutely made her year.” The commenter finished the story saying “she was so isolated and his genuine kindness to her and interest in her showed what a truly amazing man he is.”

(Not) surprisingly, Keanu asked for the uncle to call her in order for them to have a chat 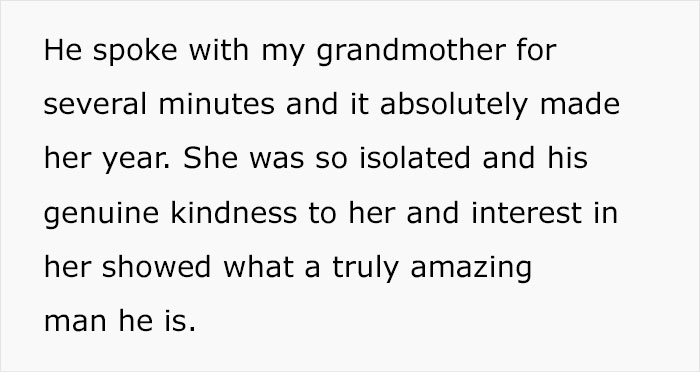 The heartwarming story has since amassed 1489 points, multiple awards and they are likely to keep growing. Of course, we can question whether everything that enters the extensive planes of Reddit is true, but people agree – it’s hard to question the kindness of Keanu, making the story believable.

“There is virtually no positive story I would not instantly believe about Keanu Reeves,” commented another Redditor, moubliepas. They continued to say that after 20 years of reading stories about the actor’s random, wholesome acts of non-showy kindness, if they went downstairs and found their kitchen had been remodeled and cleaned overnight and was told “‘yeah Keanu Reeves just flew to the UK and sat on the train for 2 hours to do our kitchen, wouldn’t accept any money’” they’d probably believe it.

Kindness truly comes in all shapes and sizes, yet most of them could fit a Keanu Reeves 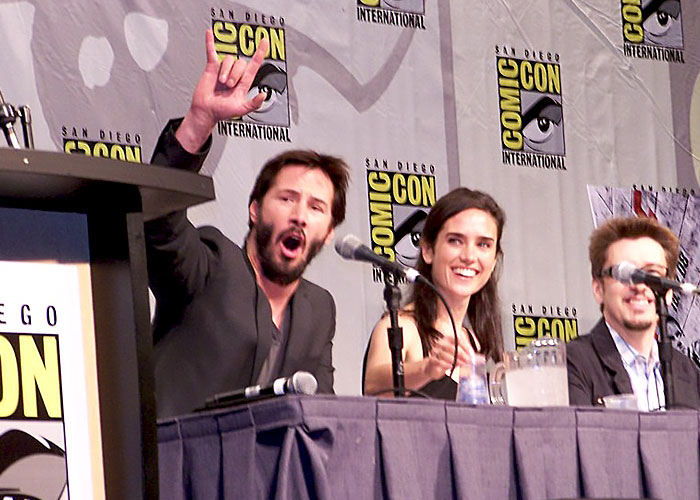 Keanu Reeves has truly become an inspiration and the model of humbleness and pure goodness. If he ever writes a manual for basic human decency, we’ll be sure to read it and offer schools to put it in the mandatory curriculum. But for now, we can rejoice in the kindness that Keanu brings to the world and aim to follow in his footsteps.

Let us know what you thought of this story! How would your grandma feel receiving a call from Keanu, what other instances can you recall when Keanu made you happy? If you’d like to see more of Keanu Reeves wholesomeness, you can find it here. Also, comment “Red panda” if you read the full article. Have a good one!

Here’s what other people had to say about the story, do you share the same feelings? 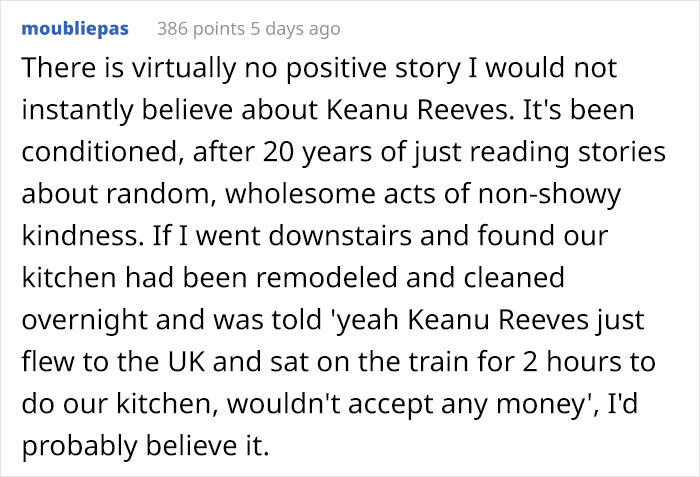 KIM Kardashian and Pete Davidson could soon be rocketing down the aisle, according to fans. And followers think…
byBizLifetime
No comments

‘Come on, Harry, we want to say goodnight to you!’ (Picture: PA) Harry Styles’ fans are calling for the global…
byBizLifetime
No comments