The 26-year-old decided to smash the chocolate treat against his head, leaving his sister Sophie declaring he had “fractured his skull.”

Pete Sandiford shocked viewers by smashing the egg on his head

Pete was left in agony

As they tucked into their eggs, Pete said:  “Did you know the way to open an Easter egg is to smash it off your head?”

He continued: “You just hit the pointy bit off your head. Watch this.”

Pete proceed to whack his head causing a painful sounding noise, leaving those watching at home wincing on his behalf.

Sophie exclaimed:  “I think I’ve got a fractured skull just from watching you.” 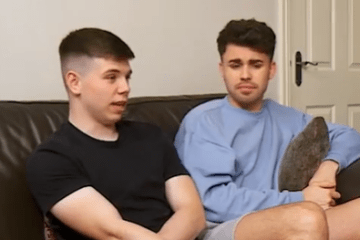 Gogglebox later shared the clip on their social media, warning:  “DON’T TRY THIS AT HOME”.

Another tweeted: “I felt that. Ouch”, while someone else commented: “Hurt my head just watching it lol 🤣🤣”

Pete and Sophie have been firm favourites since they started on the show in 2018.

Pete has since got married and has a child, but neither his wife or son appear on the series.

He confirmed that he’d welcomed his son at the National Television Awards last year, sharing at the time: “I’m a proud father. He’s a cool little lad. Takes after his mum. I slept on the train here, I’m so tired.”

His sister Sophie added: “I’m a very proud auntie.  I’m obsessed with him. I just keep saying Can I hold him can I feed him?”

And it was later revealed that he’d secretly married fiancee Paige in an intimate ceremony before the birth.

He told OK magazine: “I’m married now! It was nerve-wracking but the best day of my life. Well, second best day as I’m a dad now, too.”

TRIBUTES have poured in for actor Dennis Waterman – who starred in TV shows Minder, The Sweeney and…
byBizLifetime
No comments