I was on Come Dine With Me

A FORMER Come Dine With Me contestant has revealed how bosses knew exactly what they wanted them to say to cause a row.

Katy Spence appeared on the popular Channel 4 show back in 2014 and has been sharing behind-the-camera details on the TikTok. 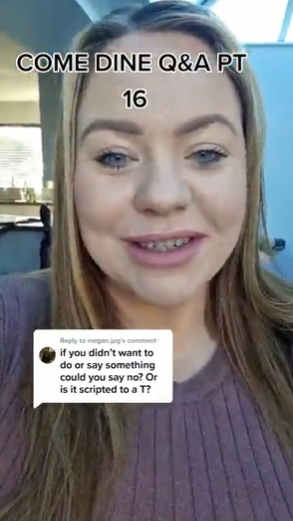 Katy Spence appeared on the show in 2014

One of her videos saw her asked: “If you didn’t want to do or say something could you say no? Or is it scripted to a T?”

Katy said: “No we’re not actors, it was not scripted we’re just real people who saw the advert and went oh that looks like fun

“I can barely remember what I say in a 3 minute TikTok so I would be no good with a script.”

She continued: “It is very guided, the conversation, but that’s how any TV works, even going on the local news, they have a certain hand to follow as that’s how TV works.

“You have incredibly observant researchers and producers who watch what’s happening, make notes and then ask questions on the things that they’ve observed.”

Katy said that for her, the producers picked up on the fact she had entered competitions and her profiteroles had won her a cash prize in the past.

She said: “They then said to other contestants, ‘Katy won money, do you think she’s going to be any good, does she know what she’s doing?’

“We weren’t just sitting there shooting the breeze there were conversations points that we were lead to talk about, because again, they’ve got a show to make.

“The funniest one we did, again, I assume that they knew, one of the contestants said something about eating swan, and he said that in an interview or something and it just became this ongoing really weird long winded conversation, it was so bizarre.”

“They know how the different elements of all our personalities are going to clash and how our different opinions and points of view are going to make good TV when we disagree on something.”

She then gave an example from her week, where one of her fellow contestants didn’t like their local greeting of ‘duck’.

Katy said: “Now I assume during her interview she’d said that, that she hated this local phrase, so it was clearly brought up then it became this undercurrent throughout the week.

“There was no script but it just kept coming back up and then low and behold in the TV show the duck comment kept appearing.”

THE BBC has announced a ‘formidable’ new Newsnight presenter – and she’s a TV legend. Not only did…
byBizLifetime
No comments

Sherwood: Is the new BBC One drama based on a true story?

KIM Kardashian and Pete Davidson could soon be rocketing down the aisle, according to fans. And followers think…
byBizLifetime
No comments