Sun’s out, guns out (Picture: ITV/@vicky.mcclure/Instagram)

Line of Duty star Vicky McClure showed off her impressive results after a ‘surreal week’ of eating ‘plant based foods’ and ‘working out.’

The 38-year-old actress updated her fans on Instagram over what she got up to during her getaway, and although she initially wasn’t up for the challenge – it’s safe to say it worked in her favour.

In one of the pictures, Vicky proudly flexed her muscles as she smiled from ear to ear in a khaki sports bra.

Alongside the string of snaps she uploaded on Saturday, she wrote: ‘Back home after one of the most surreal weeks!

‘I honestly was not prepared for the amount of working out & plant based food (no tea!).’

She continued: ‘But with the motivation of @louisbyrneiciaiw and the @thebodycampofficial crew I did it! Sometimes ya gotta step out ya comfort zone! Feel very lucky to have had this experience. 💪

‘Looking fabulous Vicky! Well deserved with all that hard work!’ one fan wrote. 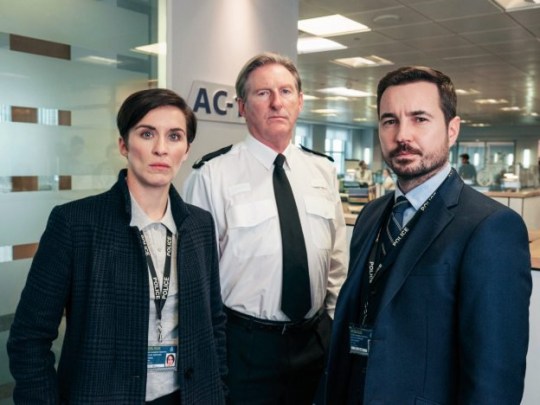 Vicky is best known for her role as DI Kate Fleming (Picture: BBC)

‘Amazing! Good on ya! I must take a leaf out of your book!’ another added.

Vicky – who stars as Detective Inspector Kate Fleming on BBC’s Line of Duty – recently wowed fans with her incredible performance in the ITV drama Trigger Point.

In October last year, it was reported that while another series of Line of Duty is apparently ‘happening’, it may be ‘a few years’ before new episodes are released after the identity of ‘H’ was finally revealed.

Fans and fellow cast members have expressed their desire for the police drama to return for another chapter.

In March 2021, Adrian Dunbar (Ted Hastings) told press that he’s keen for at least one more season because he doesn’t want the show to ‘end like this’.

‘I mean we’ve all to get on to Jed and say, “We’ve got to do one that’s not like when we were in lockdown”.

Line of Duty is available to stream on BBC iPlayer.

The actor is reprising his role after 25 years (Picture: REX/PA) Hugo Speer has been sacked from Disney’s…
byBizLifetime
No comments

AS EASTENDERS’ “tart with a heart” barmaid, Kara Tointon was nominated for sexiest female at the 2007 British…
byBizLifetime
No comments