Both Marc and Wanda have been through so much (Picture: Marvel Studios/Disney Plus)

Warning: spoilers ahead for Moon Knight episode 5 on Disney Plus.

The latest episode of Moon Knight left fans in buckets of tears, as Marc Spector (Oscar Isaac) revealed the traumatic past he’d been hiding from his alter identity, Steven Grant.

However, to make the scenes even more emotional, some viewers compared the grief and trauma experienced by Marc to the suffering of Wanda Maximoff (Elizabeth Olsen) in Marvel Disney Plus series WandaVision… and we are not ok.

In episode five of Moon Knight, after becoming trapped in a mental institution that turned out to be the afterlife, Marc takes a trip down memory lane, remembering the tragic death of his brother as a child, which his mother blamed him for.

Marc ended up suffering physical abuse from his mother and created the identity of Steven as a coping mechanism when he was a young boy.

In one scene, an adult Marc is standing outside the shiva for his mother after her death and is unable to go inside. 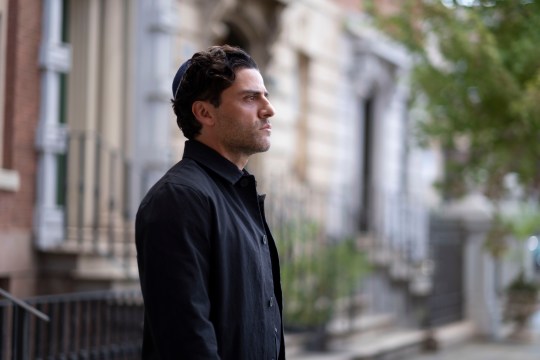 Marc was unable to cope with attending his mother’s shiva (Picture: Gabor Kotschy/Marvel Studios/Disney Plus) 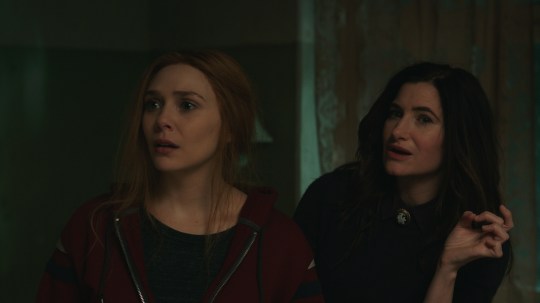 Wanda was forced to relive painful memories by Agatha (Picture: Marvel Studios/Disney Plus)

He breaks down in the street, slamming his yarmulke on the ground before picking it back up in what appeared to be a remorseful manner, holding it close to his chest before he transforms into Steven,.

Several fans spotted the similarities between the scene and a moment in WandaVision episode eight, when Wanda falls to the ground while standing on the lot that was to become the home that she and Vision planned on growing old in, as she grips the property deed tightly.

Having witnessed the death of Vision (Paul Bettany) in Avengers: Infinity War, Wanda’s grief results in her creating a false reality in Westview, complete with a new version of Vision and their children, Billy (Julian Hilliard) and Tommy (Jett Klyne).

‘Moon Knight and WandaVision both have pre-finale episodes where the main character watches their past memories and childhood trauma,’ one fan tweeted, saying the episodes left them ‘an emotional wreck’.

‘Her pain created a family, his created a friend,’ another wrote, comparing Wanda and Marc.

#WandaVision episode 8 and #MoonKnight episode 5 are hands down my favorite episodes ever, they are so emotional and heartbreaking and I love that they show us why the characters are the way they are, diving into their past and their traumas and how they deal with them pic.twitter.com/JKhI2wPxvY

Someone else said that Moon Knight and Wandavision were ‘keeping the trend of [an] emotional and traumatic episode before the finale’, as episode five of Moon Knight is the penultimate episode of the series, as was episode eight of WandaVision.

Another fan showered both shows with praise, writing: ‘I’ve never seen grief so perfectly depicted and captured on screen. My heart aches for them.’

One astute viewer pointed out that in both of the series, the antagonist ended up serving as a ‘therapist’ of sorts for the protagonist, as Wanda was forced to relive her memories by Agatha Harkness (Kathryn Hahn) while Arthur Harrow (Ethan Hawke) appeared in Moon Knight as an actual therapist in the mental institution-inspired afterlife.

A Twitter user remarked in a post that in their opinion, Phase Four of the Marvel Cinematic Universe is ‘just pain and suffering’, sharing pictures of Wanda, Marc, Loki (Tom Hiddleston) and Yelena Belova (Florence Pugh) in the depths of despair.

They may have a point.

Moon Knight is available to watch on Disney Plus with new episodes released on Wednesdays.

COMPETITION show extravaganza America’s Got Talent returns on Tuesday night for another evening of incredible acts, including one…
byBizLifetime
No comments

Pregnant Sophie Turner shows off her growing baby bump during walk with daughter Willa, 1, after Met Gala with Joe Jonas

Table of Contents Hide BONUS BABYMAKING THE MOVELOVE TURNERWe pay for your stories! SOPHIE Turner has traded the…
byBizLifetime
No comments

Succession star Nicholas Braun is working on a series centred on an indie band in the 2000s. The…
byBizLifetime
No comments

John Cena stepped up to face Kurt Angle on his SmackDown debut (Picture: WWE) John Cena made an…
byBizLifetime
No comments