Joel Dommett will return as host for NTAs 2022 (Picture: Getty)

Joel Dommett is ‘so happy’ to be fronting this year’s National Television Awards.

The Masked Singer host will be doing the honours once again, as the annual star-studded bash is set to take place at London’s Wembley Arena on September 15.

Sharing his excitement over his return, he said: ‘I’m so happy to have been asked back. There’s already been some terrific TV this year, so I can’t wait to see which shows the viewers pick as their winners.

And there’s a famous phrase Joel can’t wait to scream from the rooftops.

‘Plus, I’ve always wanted to shout the immortal words “Hello, Wembley!”‘ he joked.

The official NTA Twitter page also shared the news online and wrote: ‘The NTAs are back, Joel is back, whatever next?

‘Club NTA it’s time you grab your tickets today before anyone else! Make sure you join the ClubNTA presale here: https://nationaltvawards.com/join.’

Tickets are available to buy now, but the nominations for this year’s awards are yet to be revealed.

If the recently-announced TV Bafta noms are anything to go by, you can guarantee Succession and Ricky Gervais’ After Life will be front-runners at the prestigious bash! 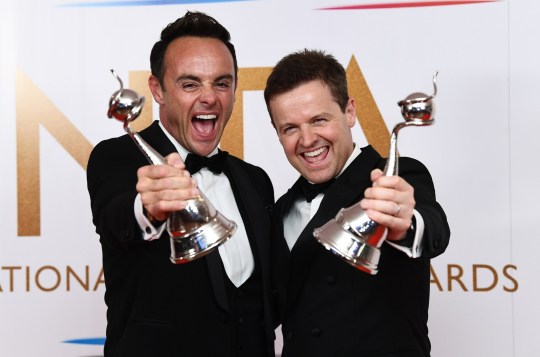 Ant and Dec took the TV presenter award home for the 20th year in a row (Picture: TIMMSY / BACKGRID)

In 2021, Ant McPartlin and Dec Donnelly triumphed as they won the TV presenter award for the 20th year in a row.

While actor David Tennant nabbed the drama performance gong, and Kate Garraway won in the authored documentary category for her programme Finding Derek.

Meanwhile, viewers were emotional after Sir Trevor McDonald delivered a poignant speech about the power of TV during the Covid-19 crisis.

Love Island spoilers: Could the girls be heading to Casa Amor?

Could there be trouble ahead for the couples? (Picture: ITV/REX/Shutterstock) Love Island confirmed last night that Casa Amor…
byBizLifetime
No comments

Jeopardy! fans call out how Mayim Bialik is ‘all over the place’ & express fury as she’s STILL hosting over Ken Jennings

JEOPARDY! fans have called out Mayim Bialik for being “all over the place” on Monday. Others expressed fury…
byBizLifetime
No comments