With a curtailed season due to Covid, Claire and Jamie are left on a bit of a cliffhanger (Picture: Robert Wilson/Starz)

*Spoilers below for episode eight and Outlander season six in general*

Outlander season 6 has finally reached its pretty dramatic denouement, plunging fans back into another Droughtlander (again) – but it was a bit of rickety eight-episode ride to get there.

The final instalment involved a satisfyingly action-heavy house siege for Jamie (Sam Heughan) and Claire (Caitriona Balfe), as they fought to prevent her from being seized by an angry mob to answer for her alleged murder of Malva Christie (Jessica Reynolds) and her unborn child.

The extended impasse in the house also allowed for another dose of relationship time for Claire and Jamie, with Balfe and Heughan always at their strongest when demonstrating the chemistry and bond they’ve nurtured over multiple years working together.

It served as a bit of light relief too, in what has been a string of doom and gloom for the couple this season, before they faced the crowd and bargained for a trial and protection from the mob for Claire.

This lack of levity was especially apparent with episode seven’s joyful and unexpectedly spicy handling of Lizzie (Cailin O’Ryan) and the Beardsley twins’ (Paul Gorman) blossoming throuple – a rare bright spot – being brushed under the carpet in a bid for the show to finally move the central Christie plot along to its next stage this episode.

The stand outs in the finale, as well as potentially the whole season, are Richard Brown (Chris Larkin) and Tom Christie (Mark Lewis Jones), both of whom are excellent antagonists in their own way – Larkin as the sneering and vicious Brown, desperate to have revenge on the Frasers after the death of his brother Lionel, and Jones as the cold but broken Christie, mourning his daughter’s death. 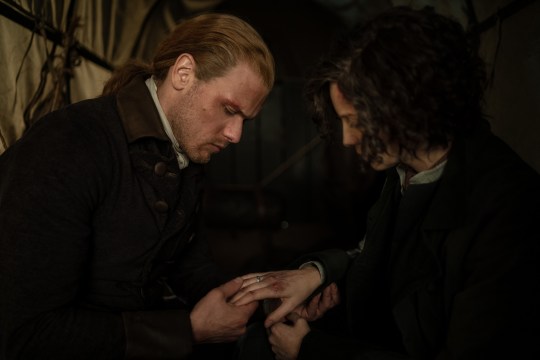 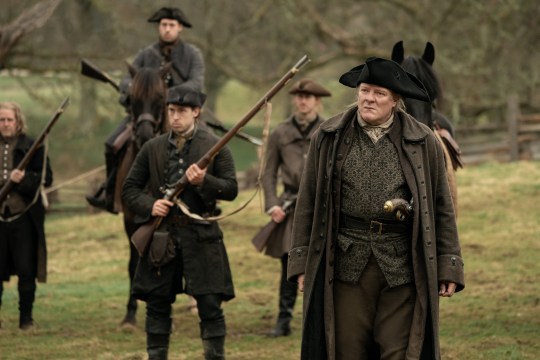 Richard Brown is still hanging around with his Committee of Safety like a bad smell, determined to have his revenge (Picture: Robert Wilson/Starz)

The only story-telling issue is the murky motivation behind Mr Christie’s sudden change of heart towards Claire, as he softens in the face of Brown’s rancour, no longer baying for her blood despite his seemingly superior motivation.

He even becomes her protector enroute to trial in Wilmington, despite no seeds being planted properly as to why that might be the case, leaving viewers as perplexed as Claire. However, Jones sells it with the depth of his authentic characterisation.

Although initially a pretty lively journey to so-called justice for the mob, taking in stoning, fist fights and arguments, it does start to drag with its unchanging level of tension. 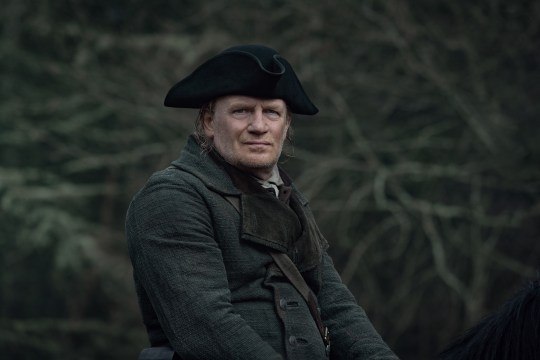 However, viewers are rewarded with a neat conclusion on the beach that harks back to more of the excitement and surprise of seasons four and five that has felt missing this time around.

Roger (Richard Rankin) and Brianna (Sophie Skelton), who faced a pretty quiet and slow-moving season, bar her pregnancy, experience a sweet moment with son Jemmy, as Roger unexpectedly receives confirmation of his fatherhood in an episode highlight.

But with a baby ahead and Roger’s plans to become ordained after finally finding his calling in the past, it’s hard to shake the feeling that they’ve mostly been treading water this time around. 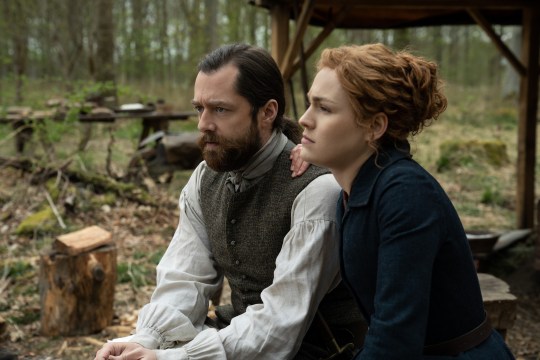 It’s been a quiet season for Brie and Roger in the grand scheme of things (Picture: Robert Wilson/Starz) 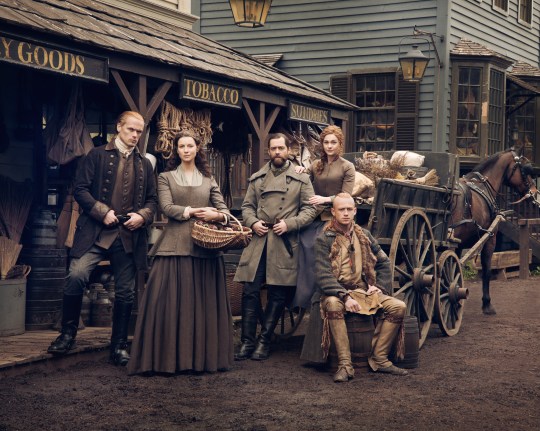 Outlander’s main cast should hopefully be in for a bit more action in season seven (Picture: Jason Bell/Starz)

For readers of the books, season six has ended rather abruptly, not getting as far as was likely expected in finishing off the plot lines from A Breath of Snow and Ashes.

Where the action is left though, is a decent compromise and stopping point, considering the upheaval the pandemic had on shooting, coupled with Balfe’s real-life pregnancy (very obviously shot around in this final episode in particular).

The season’s pacing was clearly thrown out of whack with just eight episodes – and, although making a few feature-length might have sated some fans desperate for a full dose of Outlander, it wasn’t really necessary considering the smaller span of story lines covered.

The show felt a bit flat, as well as repetitive with its murders, deaths and pregnancies, while Claire ended up dependant on ether as a way of coping with her PTSD. Obviously, some of that is down to author Diana Gabaldon’s choices for the sixth book (but not all of it).

However, shooting on season seven has already started rolling, with 16 episodes promised to make up for the shortfall this time around.

With events also firmly back under the control of producers, fans will hopefully see a return to Outlander’s in top form – moving full throttle with tighter pacing and more for the extended cast to do.

Outlander season six is available to stream on STARZPLAY.

House of the Dragon is finally giving Paddy Considince recognition

Paddy Considine has deserved worldwide recognition for years… Now he’s got it (Picture: HBO) In 2006, I was…
byBizLifetime
No comments

BBC BREAKFAST’S Naga Munchetty slammed Charlie Stayt for goading a guest with an ‘unsafe’ demand. Naga, 47, and…
byBizLifetime
No comments