Richard Madeley has been criticised by Good Morning Britain viewers for asking Labour deputy leader Angela Rayner to ‘define what a woman is’, coming out of left field to fire the question her way.

On Tuesday’s edition of the ITV programme, Madeley was speaking to Rayner with co-host Susanna Reid when he said that he wanted to ask ‘a completely different question’ to the topic they had been discussing.

‘Can I ask you a completely different question, which is in the air at the moment, as you know. Almost all politicians of your ilk are being asked it. Could you define what a woman is?’ he said.

The moment came just weeks after Labour MP Anneliese Dodds was asked for ‘Labour’s definition of a woman’ by Emma Barnett on BBC’s Woman’s Hour, with her answer sparking a widely-criticised reaction from Harry Potter author JK Rowling.

In response to Madeley’s question, Rayner said that in her opinion, the ‘huge debate’ around the definition is ‘quite damaging’.

‘It’s very clear that we need to support people who are going through… young people who may be going through challenges that they face, and I don’t think it’s for politicians or commentators to decide their fate or decide what should be happening with them,’ she answered.


Reid acknowledged that Madeley’s questions about ‘how to define a woman’ took up a significant amount of time during the interview (Picture: ITV)

‘I think people need support and people need to feel safe and that includes women and includes people who are transitioning.’

Describing the discourse as a ‘Twitter debate’, Rayner said that ‘it’s a debate that seems to be degraded to whether or not what genitalia you have, and I think it doesn’t help anybody to do that actually’.

‘I think what we need to be doing is supporting our young people into living very valued happy lives and I think that the debate that’s currently being had in the social media bubble is really not helping anybody,’ she added.

Madeley remarked that Rayner delivered an ‘interesting overview’, before pushing her further by stating: ‘But is it an overview and I just noticed that it means you haven’t actually answered the question. What do you think defines a woman?’ 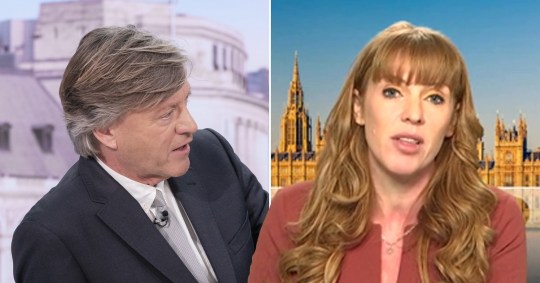 Rayner said that in her opinion, the ‘huge debate’ is ‘quite damaging’ (Picture: ITV/Rex)

‘Well, I mean I know what I define myself and I know how I identify but I know that people who are going through transition, people who have doubts about who they are and what they feel about themselves, it’s very damaging for them if we degrade it to what genitalia somebody has or whether somebody has a cervix or not,’ she replied.

On Twitter, several people slammed Madeley for his line of questioning, with one person writing: ‘Why is Madeley asking Rayner “how do you define a woman?” Trying yet again to start up a ridiculous culture war! Trying for a gotcha moment. Pathetic!’

‘That was an utterly stupid question,’ another remarked, while someone else commented: ‘Madeley trying to drag Angela Rayner into the far-right’s culture war over sex and gender definitions, now.’

While some people agreed with Madeley’s assertion that Rayner didn’t answer the question directly, another viewer wrote: ‘What is this tripe I’m waking up to “what do you define as a woman”. What’s the world coming to.’

Good Morning Britain airs weekdays from 6am on ITV.

KENDALL Jenner has shown off her gorgeous all-green kitchen inside her $8.5million mansion on the latest episode of…
byBizLifetime
No comments

Who will replace Dan Walker on BBC Breakfast as he leaves for Channel 5?

Fleur and Vito might have celebrated their scores a little too much! (Picture: BBC) Strictly Come Dancing star…
byBizLifetime
No comments