I paid £50 for botched lip filler that made me look like a duck, I should’ve known when she made me put on numbing cream

A YOUNG mum was hospitalised after a botched beauty appointment left her with a ‘horrendous DUCK LIP’.

Grace Palmer, from Earby, Lancashire, claimed her top lip swelled up to triple its usual size after the filler was inserted just twice.

The mum-of-one was mortified when she saw her new lips the following morningCredit: Kennedy News 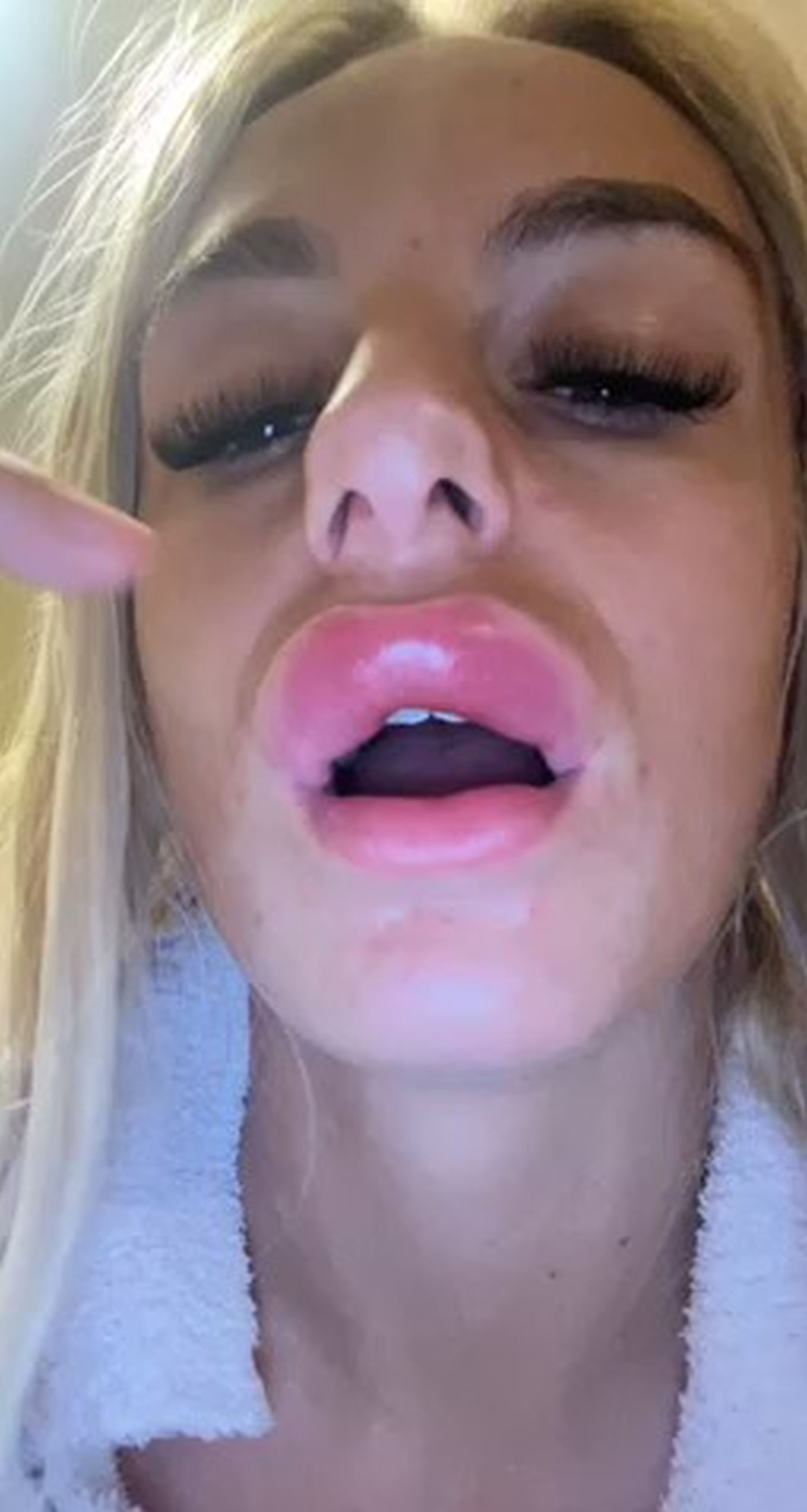 According to her, the practitioner has refused to issue a refund for the botched appointmentCredit: Kennedy News

Suffering from too much pain, the 23-year-old decided to end the appointment, with the aesthetics practitioner promising she could have the remaining 1ml at a later date.

However, the following day Grace’s lip has ballooned so much, her colleagues urged her to go to hospital to get it checked out, as they feared she’d lose it.

At the hospital, the care assistant was given tablets to tackle the extreme swelling.

While waiting to be seen by the medical staff, Grace contacted the injector for her insurance details – but this didn’t go too well, as she claimed she was met with a barrage of abuse instead. 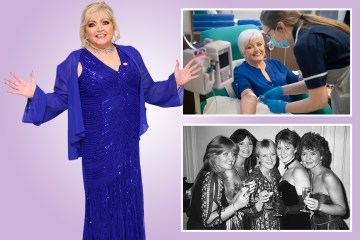 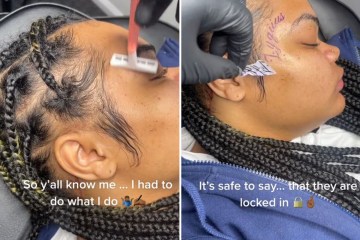 Now three months after the ordeal on December 9th, the mum-of-one has vowed never to get her lips done by anyone who isn’t a registered nurse and operates from their home.

“My top lip was massive, it was triple the size it normally is,” she told Kennedy News.

“My skin was so tight on my lip I thought it was going to burst, it was awful.

“It was embarrassing too, I felt like hiding away from people. I was essentially left with a ‘duck’ lip.”

Grace revealed she had decided to get the £50 treatment after having her lips done by the same ”expert” previously with no issues.

But, according to her, the appointment got off to a rather odd start when she was asked to apply her own numbing cream and wait in her car for 10 minutes before being let into the practitioner’s home.

But after the injector inserted the filler just two times into both sides of her cupid’s bow, Grace couldn’t cope with the wasp-like stinging sensation and demanded her to stop.

“I’ve had lip filler done by her before. The first time I had 0.5ml some time early last year and then had them done a second time in December.

“I loved it the first time, that’s why I went back for more.

”Once the swelling goes down you want more.

“The first time I only had half a ml and it was absolutely fine but this time I wanted a full ml – but she didn’t put anywhere near that in.

“It all just seemed a bit weird and dodgy from the start to be honest, she made me put my own numbing cream on in the car and then I had to wait for 10 minutes.

“She only inserted the needle into my skin twice.

”When she was pushing the filler in it absolutely killed, it was like I’d just been stung by a wasp.

“I said to her ‘I don’t know what it is that’s different but I can’t stand that pain’. 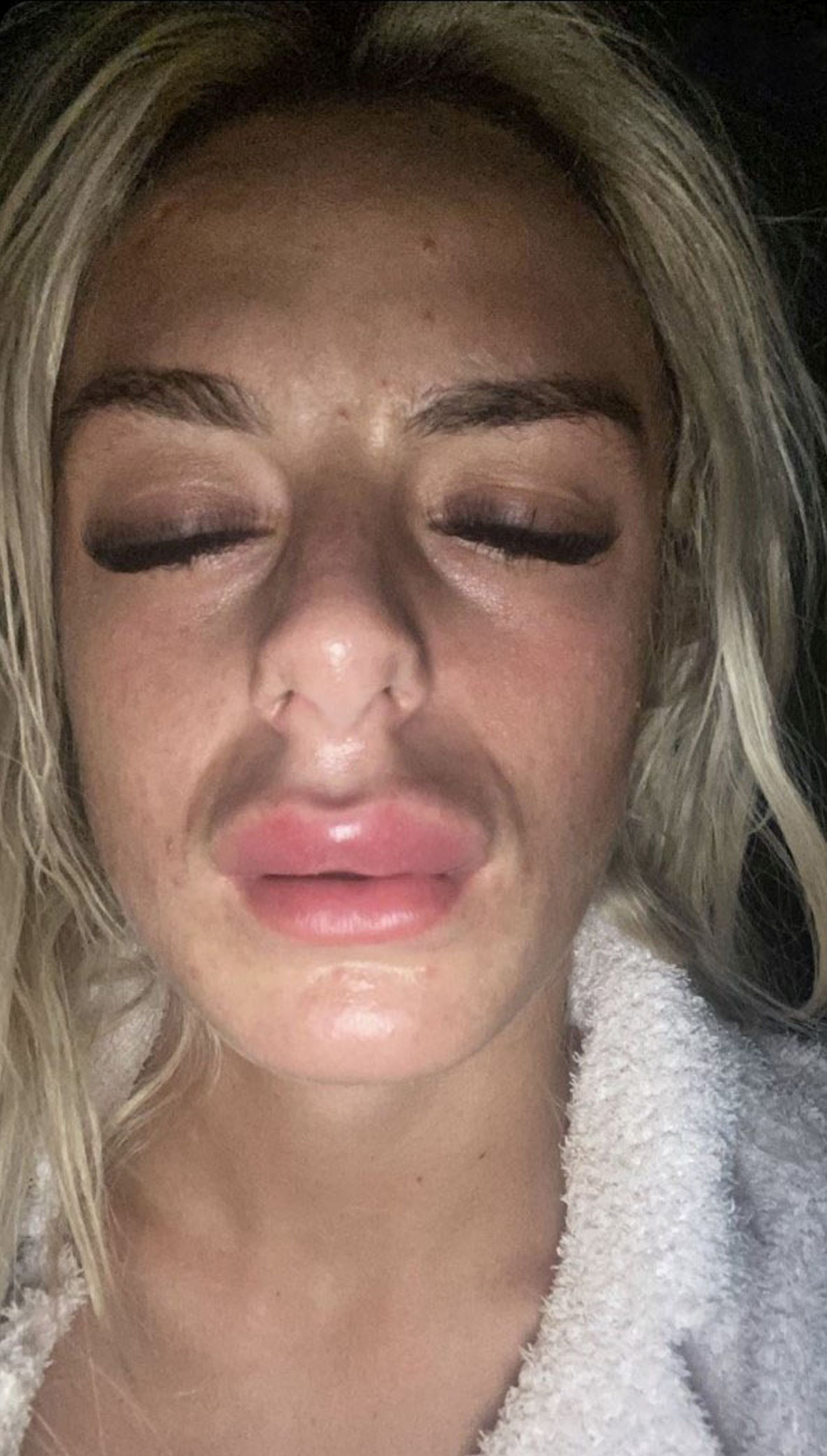 Her colleagues were concerned the lip would begin to lose oxygenCredit: Kennedy News

“It was awful, my eyes were streaming.

“I couldn’t cope anymore so I told her to stop – so basically she still had a full ml of the filler in there [the needle].

“She said she could get me some numbing stuff that would make my mouth completely numb but that it would be another £10.

“She said she would save it [the syringe of filler] and that once she’d ordered the [new] numbing cream we could use it then.

“I did think about the fact that the needle was just left but to be honest I just wanted to get out because it was too painful.

“I’ve never experienced that kind of pain in my lips before.”

After the botched appointment, Grace went home and straight to bed and it was only the next morning that she saw her new ‘duck-like’ pout.

Worried work colleagues said it’s best for her to go to nearby Airedale Hospital in Keighley, West Yorkshire, where she had her lips checked out by A&E doctors.

“I woke up just thinking ‘I want to look at my face straight away’ and when I saw that I thought oh my god.

“I work in a nursing home where there are nurses, luckily we had to wear masks. It was the only time I was happy about wearing it.

“It wasn’t just swelling on my lip, the bottom of my nose was starting to swell as well.

“When I went to work my manager and the nurses said ‘you need to go to A&E just in case you lose the oxygen in your lip, you could lose your top lip’.

“People at my work were worried in case the swelling would go higher up into my eyes.

“While I was there I was receiving phone calls from the practitioner [saying she would] come and smash my face at the hospital.

“She was so angry, she was saying things like ‘what do you expect me to do? It’s just swelling, what do you want?’.

“She also said I was stupid for going to hospital and wanted to know which hospital I was at, she was being really aggressive about it.

Had Our Fill campaign

Britain’s Botox and filler addiction is fuelling a £2.75billion industry.

The wrinkle-busting and skin plumping treatments account for 9 out of 10 cosmetic procedures.

Fillers are totally unregulated and incredibly you don’t need to have ANY qualifications to buy and inject them.

83% of botched jobs are performed by people with no medical training, often in unsanitary environments – with devastating results.

Women have been left with rotting tissue, needing lip amputations, lumps and even blinded by botched jobs.

Despite the dangers, there is no legal age limit for dermal filler, which is why Fabulous has launched Had Our Fill, a campaign calling for:

We want anyone considering a non-surgical cosmetic treatment to be well-informed to make a safe decision.

We’ve Had Our Fill of rogue traders and sham clinics – have you?

“She also wasn’t willing to give me any refund – bearing in mind I’ve not used that filler there was a full ml still in that syringe.

“All I kept asking her was ‘can you give me your insurance details please?’.

“She was just saying ‘if you want insurance details then come to my door and get them’ like in a threatening way.

“Obviously she didn’t want to do that, she refused to give me my money back and said if I put it anywhere that she was going to get me done for slander.

“I was concerned with her saying what hospital are you at, I was worried she was going to come.

“I was more worried about my lip and what was going to happen to my face.

“The doctors pressed on it and it went from white to pink straight away so the circulation was still there, so they were happy about that.

“They weren’t really sure what had gone on because it was so swollen but they gave me some tablets to take and they said it would take the swelling down.

“I took them and within one or two days the swelling went down.”

Two days after Grace was able to return to work, and has since vowed to never get treatment with the injector again.

“I’ve not had any contact from her since and she’s not given me any refund, I’ve just got on with my life.

“I’ve not even thought about getting them done again but if I did I’d go to someone who’s professional, who’s got a shop, and is a proper qualified nurse.

“I would never go to someone’s house ever again that’s put me off that.” 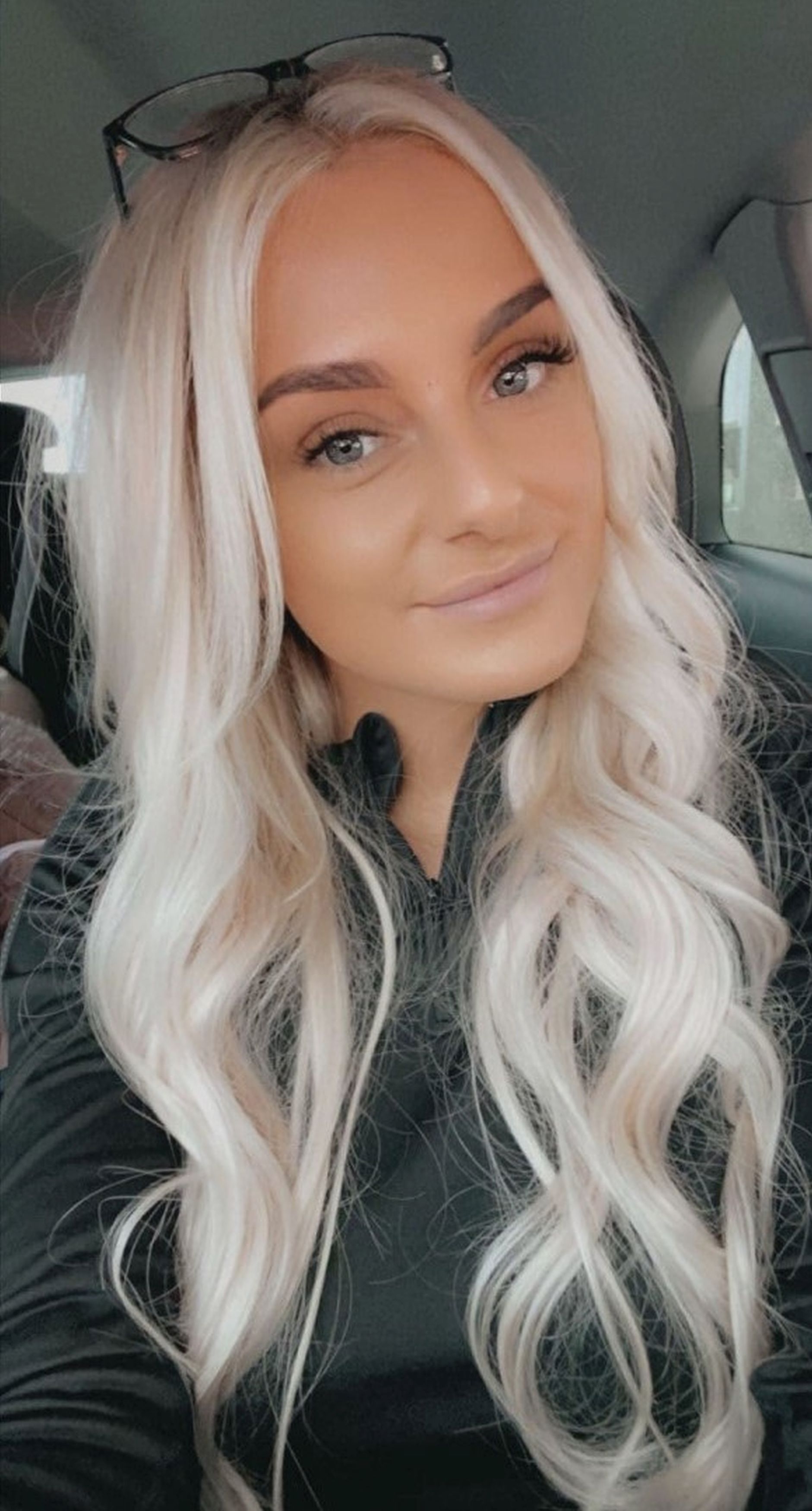 After the botched appointment, Grace has vowed to never see the lip lady againCredit: Kennedy News

IF YOU think you’ve got a big forehead or aren’t a fan of the positioning of your hairline,…
byBizLifetime
No comments

THINK you need to fork out £400 for the coveted Dyson Airwrap? A shopper has raved about a…
byBizLifetime
No comments

Hatch Restore Review 2002. Everything You Should Know