Family can be both a blessing and a curse. It’s nice to have someone that knows you for so long that you are related by blood with and who will be in your life no matter what happens. But sometimes relationships in families aren’t that smooth because sharing blood doesn’t mean that you share the same values and outlook on life, however you feel stuck with them.

The same can be said about your significant other’s family, but redditor simpleguyy6 doesn’t think that people need to always be there for toxic family members. His girlfriend disagrees and they got into quite a huge fight when she went behind her boyfriend’s back and gave her sister a key to their house where she is not welcomed by the man.

Man is furious after he finds out his girlfriend gave a copy of his house key to her sister, so he changes the lock and doesn’t give the key to anyone

The Original Poster is a 27-year-old man who has been dating his girlfriend Ashton for 2 years. They live together in a house he owns, but simpleguy6 doesn’t charge his girlfriend rent as she is still finishing her master’s degree. They both agreed that the OP pays for the majority of the household expenses and Ashton would contribute to paying for the groceries, utilities and helping with some of the chores until she graduates.

While Ashton is getting higher education, her sister is a bit of a “hot mess” as the OP describes her. The sister, Anna, doesn’t get along with the rest of her family, she has two kids and they both have different dads, she has been divorced two times and never had a stable job for an extended period of time.

It seems that she doesn’t even want to pull herself together because all she does is complain about her life but doesn’t take action to change it. 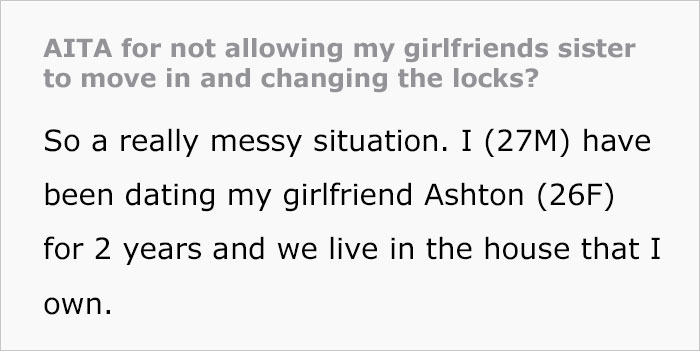 The OP and his girlfriend live in a house that only the boyfriend pays for, but they both agreed on that

The OP has been helping her by giving rides and babysitting her children, but he is tired of it and gave up on her after she started dating a guy who didn’t even like kids. Not only was the OP against that man, but Ashton was as well, however, Anna didn’t listen to any advice they gave.

The man’s frustration is understandable because his help didn’t give any results in making Anna get her life in order. If the person themselves doesn’t take matters into their own hands, nobody can do that for them.

Turns out, OP’s and Ashton’s intuition didn’t betray them and Anna didn’t last long with the new guy. But the problem was that they were living together and when the couple broke up, Anna didn’t have anywhere to go, she didn’t have a job or money to start over, so she turned to Ashton.

Ashton couldn’t turn away from her sister not having a home, talked about it with simpleguyy6 and asked if Anna could live with them for a while, but the boyfriend protested immediately.

The girlfriend, Ashton, has a sister, Anna, who is a little bit all over the place and can’t seem to pull her life together 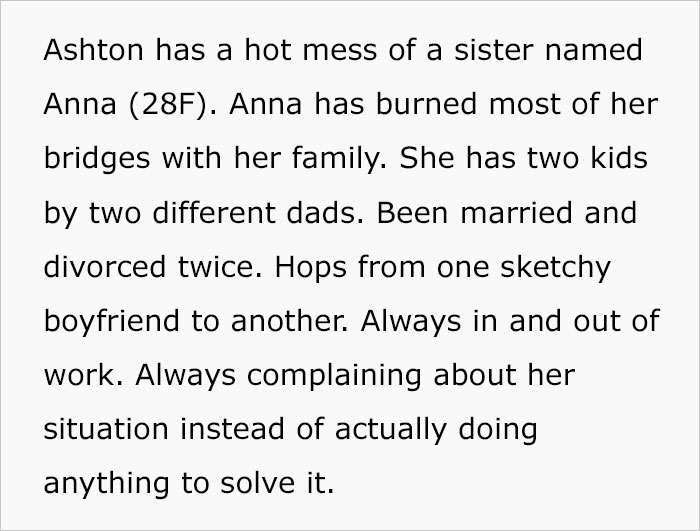 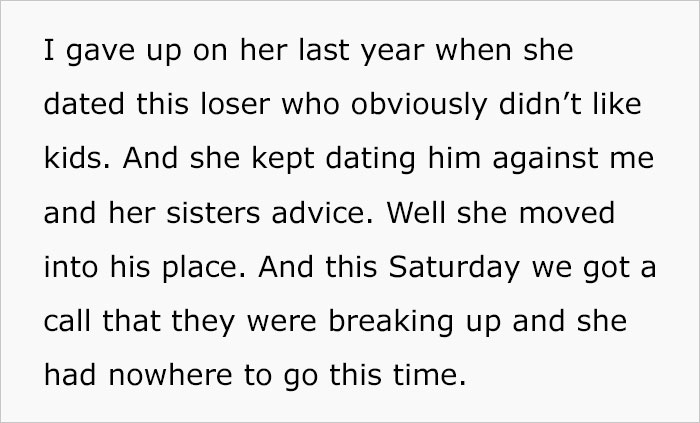 First of all, he considered Anna to be a leech. He helped her plenty, but she didn’t use that help to get out of her difficult situation. Secondly, the OP doesn’t want children in his house because he works from home half of the time and 3 extra people in his space would not be ideal.

Ashton tried to convince him that this is the right thing to do, but the boyfriend was firm and agreed that they would help her by bringing her food but not sharing his home with her. 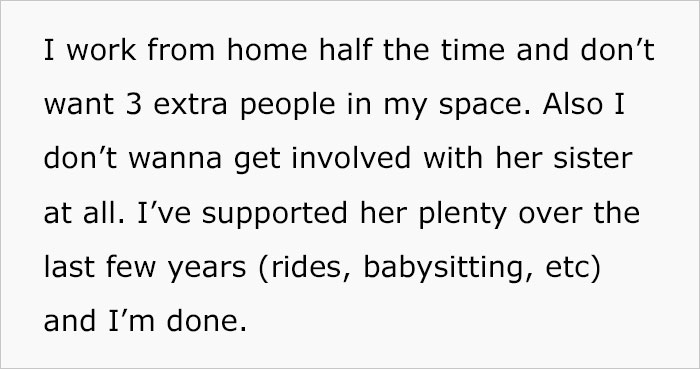 The conflict escalated as the girlfriend caught on when he took full ownership of the house even though they lived there together. His argument was that he was the one paying for the mortgage so until Ashton did that, she wouldn’t have a say in who can live in the house.

Some people in the comments also felt weird about the OP saying that it was his house only, so simpleguyy6 elaborated and said that it’s her home, but not her house: “It’s her home yes. But she doesn’t get to make real decisions on it till she has her skin in the game.” In another comment he said, “I don’t know if I plan on getting married to her yet or not. It’s not her house. Legally or in any way shape or form. If the house lit on fire tomorrow she’d have no financial obligation. So no, it’s not her house.”

Ashton asked her boyfriend if they could stay at their house, but the OP didn’t want to hear any of it 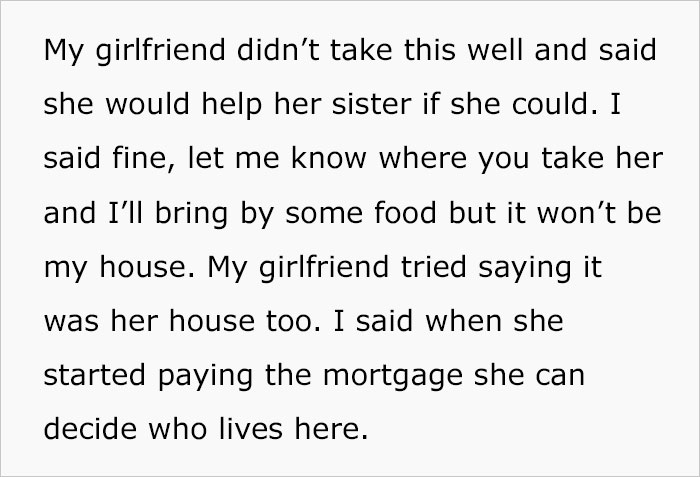 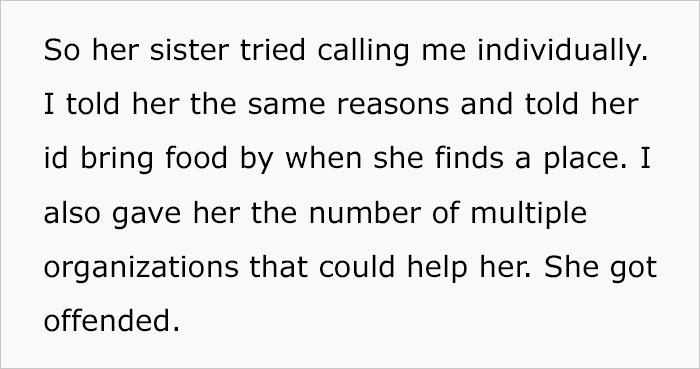 But turns out that Ashton had given Anna the keys from his house months ago, so one day she just let herself in 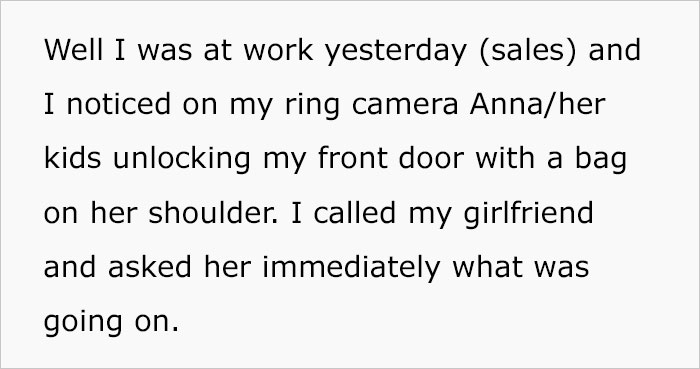 Because Ashton wasn’t able to talk the OP into welcoming Anna to his house, the sister called him to try it herself. She was unsuccessful and even got offended when simpleguyy6 suggested to her some organizations that could help her to find a roof over her head.

The man thought this was the end and made his stance clear but while he was at work, he saw Anna and her kids entering his house on his ring camera. She wasn’t accompanied by Ashton and had a bag on her shoulder.

The OP couldn’t understand how Anna managed to get in, so he asked Ashton what was going on. Turns out, Anna needed a place to stay for a few hours until her ex emptied the apartment, so she went to OP’s house because she had a key as Ashton had made her a copy months ago.

Finding out this information made simpleguyy6 very mad and he was about to call the police, but Ashton called Anna and told her to leave. The OP was so mad that he changed the locks on his house and didn’t give the new keys to Ashton. She needs to ask for access through the garage and this is the only way she will be able to get it until her sister finds a place to be. 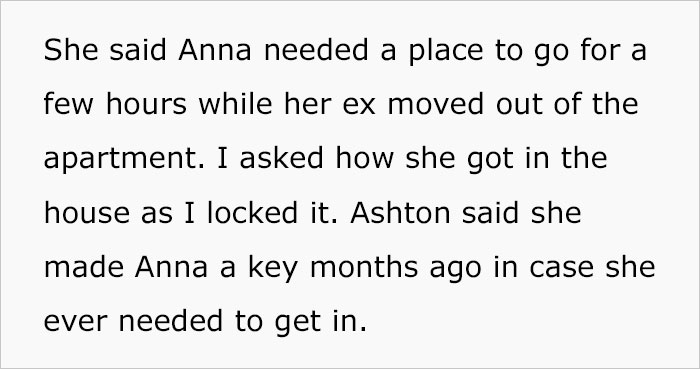 The OP was so furious and felt so betrayed that he changed the lock on the door and didn’t give the key to Ashton, who now has to request access through the garage 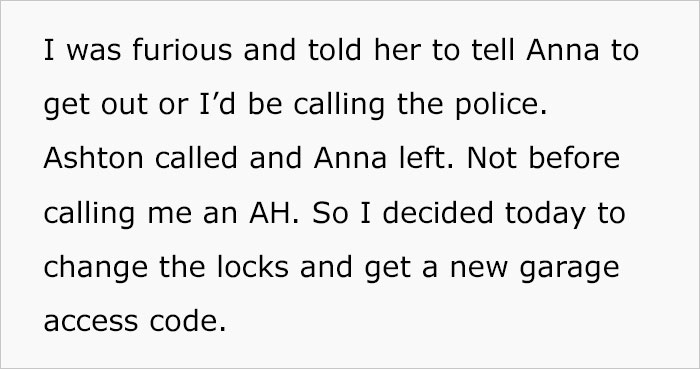 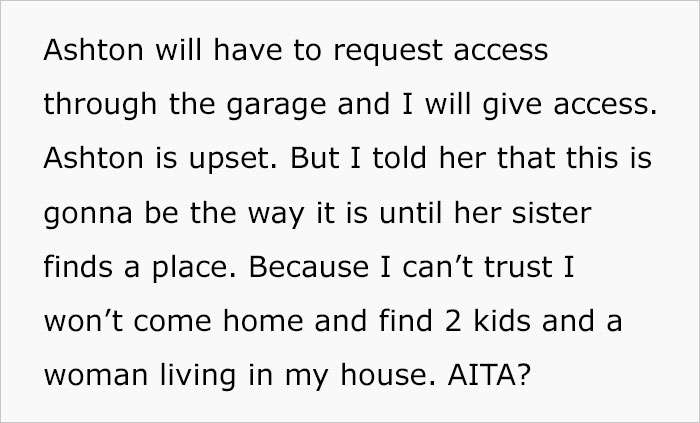 He did that because he is afraid that one day he’ll come home and find his house occupied by a woman with two kids. However, he was called a jerk, so he second-guessed his actions. He offered an explanation to why he feels like that: “I feel like I’m being over controlling and it’s causing stress into my life and that makes me an AH to myself.”

People in the comments were concerned about Ashton making a copy of a key for someone that is clearly not welcome in their house behind OP’s back. They also believed that letting Anna stay at his house wouldn’t help her because people get comfortable with sitting on someone else’s neck, so it would have created even more problems.

What do you think? Do you sympathize with Anna and would have let her into your house along with her children? Or do you think that she lacks responsibility and you would be suspicious of her wanting to become a real adult with a stable income and home? Let us know your take on the situation in the comments!

Ashton and Anna think the OP is a jerk for the way he behaved, but other redditors thought the girlfriend’s behavior was questionable 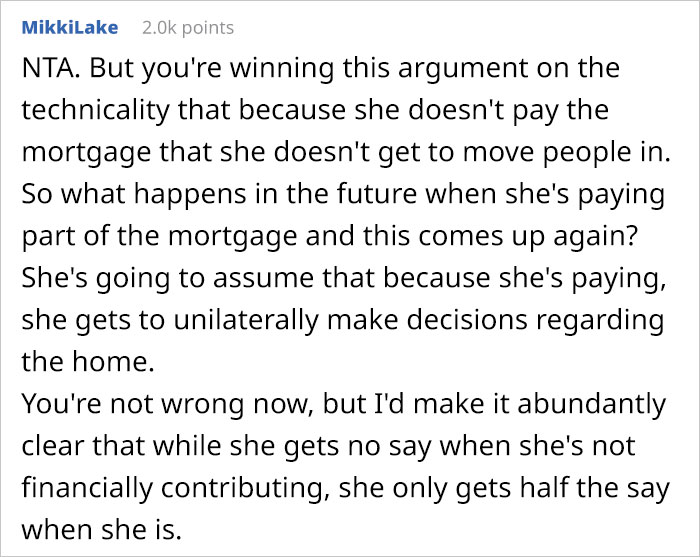 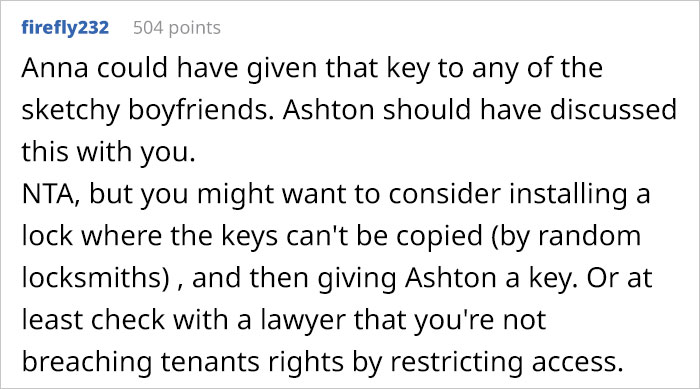 FROM mind-blowing orgasms to their favourite sex toys, no subject is off limits for long-term friends Holly Robinson…
byBizLifetime
No comments

GASLIGHTING has become part of our everyday language, with Love Islanders regularly accused of playing such mind games…
byBizLifetime
No comments

It seems we have been hunting for the wrong thing all these years (Picture: Getty) Hunted by many…
byBizLifetime
No comments

I’m 75 now, and my husband, Andrew, is 74. We were in the same class at school but I hardly…
byBizLifetime
No comments