How to make it through the vibe shift

Is the vibe going to shift from Y2K to indie sleaze? (Picture: Getty/metro.co.uk)

Have you heard? Apparently, there’s a vibe shift a-coming.

Thanks to a viral article in The Cut, the idea of a looming, seismic cultural and fashion change on the horizon has stressed many a digital native all over the globe.

Suddenly, our perceived ability – or lack thereof – to make it through this shift became a very hot topic. Will you get left behind or are you still young and flexible enough to go with the flow?

While the idea of suddenly looking around you and realising you’re past it is not a nice thought, it’s little wonder that people are talking about the possibility of a new big ‘thing’ given the pandemic we’ve been living through for the past two years.

Now, as the Government has us ‘Living with Covid’, it feels as if we’ve all just started at a new school – everyone’s been given the chance to reinvent themselves should they choose.

Even if you haven’t made the conscious choice to change, it can happen easily enough in a normal two years, much less when the whole world has (granted, with varying degrees of privilege) experienced the same calamity at the same time.

Despite the fact that we’ve been burned by multiple lockdowns, tier changes (remember those?) and scary new variants before, it does feel like something is on the horizon.

Alex Quicho, head of cultural intelligence at consumer insights agency Canvas8, tells Metro.co.uk it’s partly down to the pandemic but also the fact that the last of the millennials, aka Gen Yers, have now hit undeniable adulthood.

She explains: ‘The “vibe shift” — as we’re seeing it crop up colloquially, in response to the article — simply describes the trend cycle. Yet there is a deep undercurrent of anxiety around this particular vibe shift, due to its coinciding with an exit from pandemic restrictions, and the transition of Gen Y into adulthood.

‘Gen Yers have always struggled with “adulting” – even coining the term itself, which conveys a bit of cluelessness when it comes to doing tasks perceived as quotidian by older generations. This is driven by well-documented barriers to “real adulthood” – multiple recessions, property inflation, unstable job markets – as well as the dissolution of traditional life markers.

‘Yet Gen Y has firmly entered adulthood, with all its demands and responsibilities. There seems to be a fundamental tension between the millennial attitude (eternal adolescence, comfort-centric environments and consumption, irreverent communication) and its material reality (parenting, professionalisation, property).’

Now that lockdowns are (if we dare to dream) a thing of the past, Alex says our re-emergence into society could have exacerbated the feeling among some millennials that they’re suddenly grown and starting to fall out of touch with the zeitgeist.

She adds: ‘As the first digital natives, culturally-aware millennials have been accustomed to leading on digital trends and behaviours; there was an assumption that simply being “very online” would ensure that they were up to speed with cultural changes.

‘Yet most are experiencing lag when it comes to adjusting to and understanding Social 3.0 (short-form video + associated behaviours.) Additional proof in the fall of the GIF, the cultural decline of Instagram more broadly, and the rejection of millennial minimalism and workaholism in favour of “cluttercore” and an anti-work philosophy.’

So ultimately, all the ado about this vibe shift in particular could be down to ‘a transition of cultural power’; an unwilling passing of the torch to the latest generation just starting to come of age.

‘Core millennial values — which have underpinned much of the dominant cultural discourse, shaped our workplaces and determined many people’s relationships to not just style, but work and aspiration — are being questioned, resisted, and rewritten by Gen Z, in what is typical of generational cycles,’ says Alex.

‘The fuss around [this vibe shift] is stirred up by Gen Y’s reluctance to hand over the reins — and thus their claim to youth culture and the inside track.’

So what could we be shifting into?

For starters, there’s been lots of chat about the return of indie sleaze.

Best described as messy, sexy, and (at least outwardly) low-effort, indie sleaze was at its peak around the late 00s and passed away before the teens.

With late 90s and Y2K fashion (along with their cool mum, The 70s) currently having a very strong moment, it’s little surprise that trend forecasters have been predicting a resurgence of this clubby, hedonistic subculture from the years almost immediately after.

Meanwhile, Natacha Blanchard, consumer lead at Vinted, predicts that the shift’s new fashion will be all about ‘energy and attitude’, explaining: ‘The vibe shift comes at the end of a culture shift based on changes within the economy, social events, and advances in technology.

‘After being in lockdown and living in loungewear, we are entering a shift that is all about energy and attitude. The use of bright colours, monochromatic outfits and lots of thin layering are going to be main features in this “vibe shift”.’

If you want to try to stay ahead of the curve, Alex recommends keeping up with the right people online.

‘For fashionistas through time,’ she explains, ‘the eternal question has been “how do I stay ahead of the vibe” and these days that means TikTok. It is home to a huge amount of fashion discourse, but you need to be in the know to prune your algorithm to really tap into the most interesting and influential content.

‘Creators like @thealgorythm or @oldloserinbrooklyn act as aggregators and are a brilliant place to start to stay fashion-forward. But with trend cycles becoming more compressed and reactive, and archive fashion signalling a rise in fashion connoisseurship, setting your own personal “vibe shift” strategy is key, starting with learning more about the source.

‘You can’t discount the power of classic commentators, who may well have their own Substacks going on, but still have a main and influential platform in traditional outlets. They are really deconstructing the runway trends set to trickle down to the everyday consumer level – the ones to watch are Rachel Seville Tashjian and Cathy Horyn. These are the standout figures for those keen to leap on the vibe shift.’ 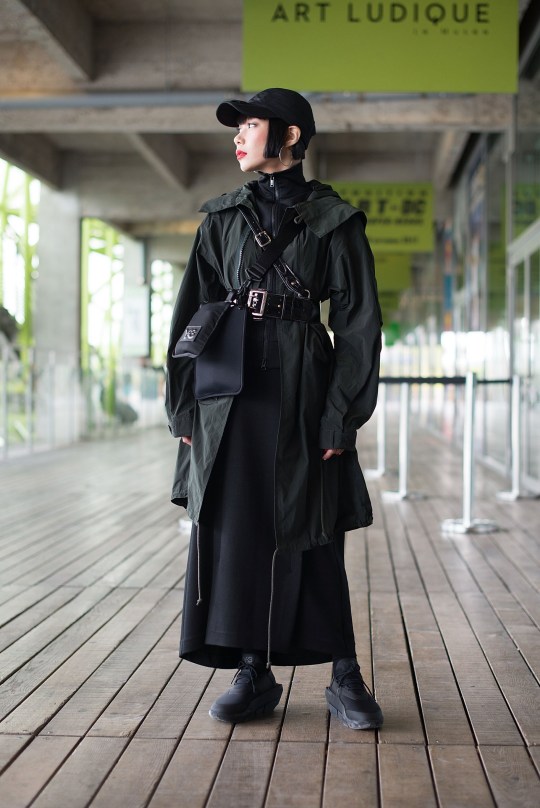 However, while style is a big part of a vibe shift, it’s not everything.

Alex thinks the shift is also going to be about ‘a response to a Western world pushed to breaking point’.

‘Its slacker undertones resist an exploitative and burned-out work culture,’ she says. ‘It embraces messiness and irreverence, rather than polish and professionalism.

‘It kills the “personal brand” in favour of a more unstable, changeable identity. And while it may appear apolitical on the surface — a worrying tick back to a “pre-woke” era — Gen Z are still highly engaged in activism and causes they care about.

‘Therefore, the “vibe shift” signals a move away from a 1:1 relationship between politics and persona, in that it proposes a little bit more freedom — a natural reaction after years of restriction.’

Ultimately, the question of keeping up with a vibe shift is really about who has the ability and/or drive to move with the times – a core quality of young people and, therefore deeply desirable in much of society.

Sure, you can find your vibe naturally changing without even realising it, but what if, after reading all this, you’re thinking to yourself: ‘Actually, I’m happy to not shift right now’?

‘Of course, not everyone will lean into this upcoming vibe shift,’ says Alex.

‘Some will shun mainstream culture and prefer to craft their own identities, hunting for new experiences, rather than following the influence of TikTok and other social platforms. And not all brands will change their strategies based on these shifts.

‘These people enjoy influencer culture but prefer more ‘real’ and self-deprecating creators – flocking away from algorithm-led advertising and towards more meaningful conversations with the creators and brands they consume.

‘The vibe shift isn’t a new revelation, trend cycles come and go, so those who may not be interested this time might find themselves swept up in the next rotation.’

Meanwhile, Natacha argues that ‘attitude’ will be the most vital part of the shift anyway, adding: ‘don’t focus on what others think, just be experimental and search for the trend that suits you.’

Selena Gomez Dazzles at ‘Only Murders in the Building’ Premiere