This is the work of Italian chef, Francesco Mazzei, who Franco Manca credit with bringing nduja (a spicy sausage spread) to the UK from his hometown Calabria, Italy.

The new pizza, called No.8, is inspired by the colours of the Italian flag and is both sweet and sour – with a touch of spice.

It’s available in Franco Manca branches from now for a limited time, so you’ll want to visit one soon to taste this unusual yet inspired mix of toppings.

Francesco, who has won plenty of awards, works with southern Italian flavours from the coastal regions and islands off Italy. 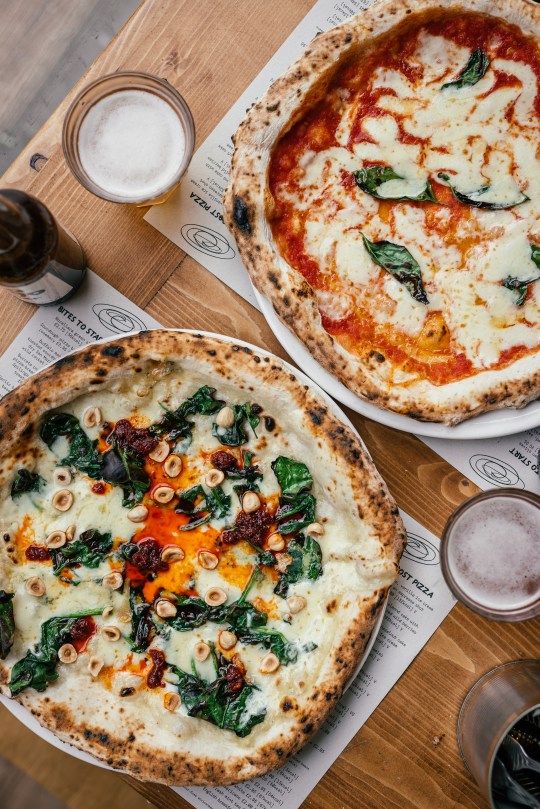 Francesco said: ‘Franco Manca and I both share a love for authentic Italian cuisine, so having the opportunity to put my own spin on their wonderful menu was something I just couldn’t turn down.

‘The No.8 pizza embodies all the things I love about southern Italy and I can’t wait to bring a taste of Calabria to restaurants across the UK.’

We got to try the new pizza on its launch – it was a pleasant surprise.

The white base isn’t overly creamy, as can often be with white pizzas, and the dough is Franco Manca’s classic sourdough base. All in all, a good start.

Honey was the unexpected yet winning topping to our taste buds, working nicely against the nduja.

The pizza certainly has a kick to it, so those adverse to spice should steer clear, but the heat is brought down by the other ingredients so it isn’t too fiery.

The roasted hazelnuts create a varied texture, and this was the probably the most unusual part of the pizza – but still, the nutty flavour brought balance to the spice of the nduja and the sweetness of the honey.

That’s one thing this pizza does incredibly well: balance flavours, so it’s never too much of one thing. Every ingredient, including the stilton, gets its moment to stand out on the tongue.

Would we have it again? Probably not, preferring to stick to more classic pizzas. But to switch things up as a one-off over the next few months it’ll be on the menu for?

It’s perfect for that. You won’t find a pizza quite like it.

I’m a bargain whizz and here’s how you get free food from Asda, but you’ll have to be quick

89 Cooks Are Sharing Their Basic Cooking Hacks, And They Might Actually Surprise You

Contrary to popular belief, it often doesn’t work out great if you add your chopped/minced garlic first to…
byBizLifetime
No comments

Six foods that can help to tackle anxiety

Table of Contents Hide YoghurtBrazil nutsEggsDark chocolateSardinesAvocado Need support for your mental health? Apparently, what you eat can…
byBizLifetime
No comments

If you’re spending more on presents save some cash by making hot drinks at home (Picture: Getty Images)…
byBizLifetime
No comments