Review: What does the new ‘space-inspired’ Intergalactic Coca-Cola taste like?


Ready to go to space… in a drink? (Picture: Coca-Cola/Metro.co.uk)

According to scientists, raspberries and burnt caramel.

Yep, the big dogs at Coca-Cola have attempted to capture the mysteries of the universe in a beverage, which they call Intergalactic.

To keep a sense of intrigue, Coca-Cola hasn’t revealed what exactly the drink is supposed to taste like, or what flavourings have been used.

Instead, their senior director of global digital design, Joshua Schwarber, says Intergalactic ‘aims to bring some of the magic and mystery of everything that we love about space to life with every single sip’.

The twist on fizzy pop – the first ‘Coca-Cola Creation’ – is a limited edition product, so the brand is encouraging people to snap up a can while they’re able and have a taste.

But the fact is, some of us don’t thrive of suspense and surprise. If we’re parting with our hard-earned cash (even a recommended retail price of 77p), we want to know what we’re getting.

For these people, Metro.co.uk is here to help. We got our hands on some cans, poured out samples for the team to try, and have shared everything you need to know below. 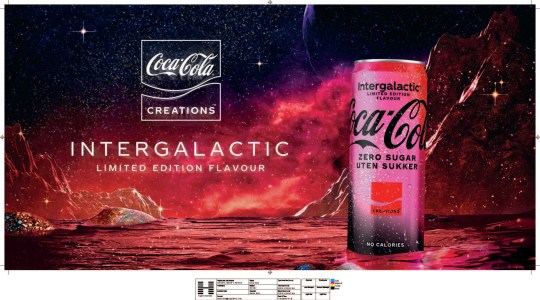 Behold, the drink that tastes like space… so Coca-Cola says (Picture: Coca-Cola)

The can is a nice shade of fuchsia and deeper purple, with some smattered star details to suggest that cosmos theme.

Crack it open and the drink inside is… red. A sort of diluted cranberry juice look. Fun.

It fizzes quite a bit on initial pour, but this dies down quickly.

The smell is where things get interesting.

Our testers described the scent as ‘buttered popcorn’, ‘candy floss’, and ‘biscuits’. It’s definitely got a creamy, buttery hint – definitely not the smell of your standard Coke. 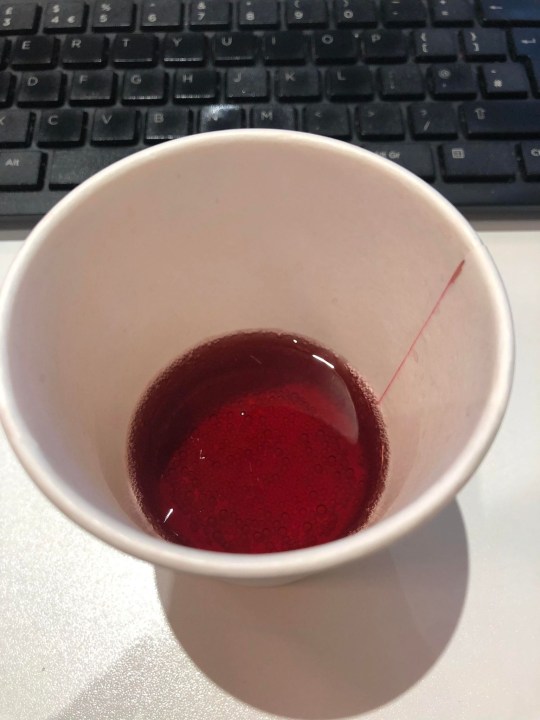 The smell and colour make Intergalactic seem intriguing, exciting, exotic… that doesn’t carry through to the taste.

‘It’s like bad Doctor Pepper that’s been mixed with Cherry Cola and Ribena that’s been through a Soda Stream,’ said executive editor Richard, who also told us that leopard urine, like this drink, smells like buttered popcorn (a fun fact).

The lack of fizz was a common theme. Most of us noted that the initial fizz goes fast and ends up flat.

In terms of flavour, our taste testers were mostly confused.

‘It definitely tastes like something I’ve had before,’ said Ross, from our Platform desk. ‘But I don’t know what.’

Jess, Platform editor, listed notes of marshmallow and candy floss, along with the aforementioned popcorn, while both Deputy News Editor Sian and I thought Intergalactic was a bit cream-soda-esque… but diluted.

A couple of triers said the flavour was like cherry cola – but personally, I think their tastebuds are being manipulated by their eyes. They see red, and assume a cherry taste must follow. 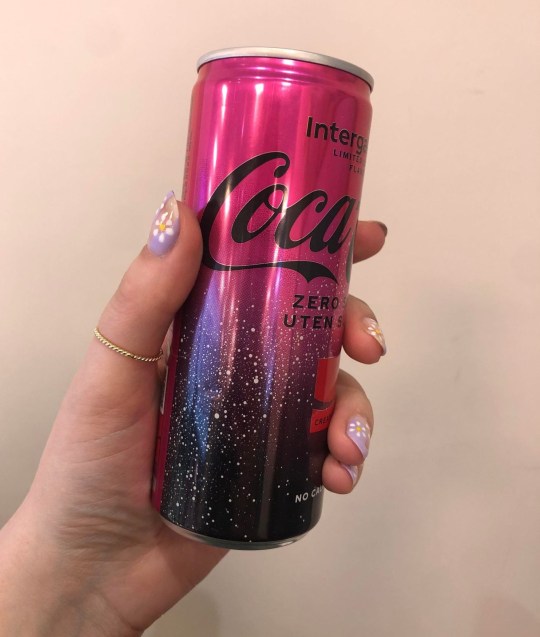 Alas, we did not feel as though we had been transported to space (Picture: Ellen Scott/Metro.co.uk)

Jeff, our science and technology editor, declared that he ‘quite liked it’. When I pushed him for an answer on whether the drink tasted ‘like space’, he replied: ‘Space is a vacuum so it’s kind of a defunct concept, but if Space did taste like something, maybe it would be like this.’ Interesting.

A quick read of the ingredients reveals the true culprits for the flavour: carrot and blackcurrant concentrate.

Overall, the verdict? Confusing, a bit underwhelming, and not as good as regular Coca-Cola, but generally fine.

It’s worth a try if you’re in such a state of drudgery that a slightly different fizzy drink is an urgent need to add some small bit of excitement to your life… or if you think Vimto is a ‘bit much’.

The average rating out of five from the team was a two, but this dropped to a one with the knowledge that Intergalactic is supposed to taste like space.

Coca-Cola is clearly going big on this drink, despite our underwhelm. Along with the beverage itself, there’s all kinds of promotional stuff.

When you scan the QR code on the back of the can, for example, it launches a ‘Coca-Cola hub’ (basically three Instagram Story like slides talking about Coca-Cola Creations), then a video of an augmented reality concert by Ava Max, who performs Kings & Queens, Sweet But Psycho, and EveryTime I Cry while appearing to be surrounded by red liquid.

There’s also a special Instagram filter, which puts little glowing stars on your eyes, for some reason.

Intergalactic is just the first in a whole line of Creations, a project which Coca-Cola ominously describes as ‘a new platform which takes the iconic Coca-Cola brand and lends it to new expressions, driven by collaboration, creativity and cultural connections’.

‘Over the course of 2022 and beyond, Coca-Cola will collaborate to create new flavours, designs and experiences, reimagining its iconic product in time-limited editions inspired by relevant moments across culture, music and gaming, in both the physical and digital worlds,’ adds the press release.

Sounds worrying. Here’s hoping that the next Creation packs a bit more of a punch than this diluted candy floss spaceship that’s failed to launch.

Celebrities Who Have Pets With Food-Inspired Names: Pics

Cute enough to eat! While some stars stick to traditional names for their pets, like Buddy or Buster,…
byBizLifetime
No comments

The most ‘common’ dishes Brits serve have been revealed as the nation hits a ‘cooking rut’ – is your go-to on the list?

How Do I Stop Boredom Eating?