Feeling anxious after welcoming a baby is natural and to be expected (Picture: Darryl Hannah Baker)

Midway through my first day back at work after a year’s maternity leave, a thought blindsided me: ‘What if my 12-month-old died? How would the childminder tell me?’

For a few agonising seconds, ice gripped at my heart and squeezed tight. Then, as quickly as the thought formed, it dissipated and disappeared into thin air.

In my BC world (before children, not Covid) I never gave much consideration to anxiety. Now, I realise I didn’t understand what it was – I associated it with simply being anxious – whether it’s about a job interview or waiting for a smear test result.

That changed after I welcomed my daughter Blake in 2019.

Out of nowhere, intrusive thoughts would come crashing into my head and release a wave of silent panic over my body.

For a long time, especially in the first few months of becoming a mum, I felt like I was losing the plot as my head spiralled and I failed to get a grasp of it.

I’d be bathing my newborn when all of a sudden a thought would form: ‘If you fainted now, she’d drown in the bath’.

After the initial debilitating rush of fear engulfed me, the rational part of my brain asked: ‘Why would you faint?!’ and the situation would be calmed, though I’d be left with a shaky unease at the scenario that had presented itself moments before. 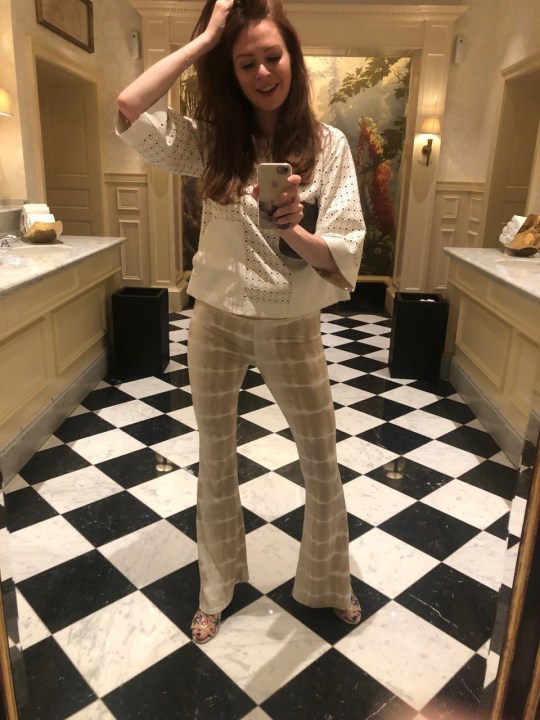 For a long time, especially in the first few months of becoming a mum, I felt like I was losing the plot as my head spiralled and I failed to get a grasp of it (Picture: Darryl Hannah Baker)

Nearly three years on, and now a mum-of-two, it still happens. Frozen in a vice-like grip of terror, I’m helpless as terrible scenarios play out in my imagination. The thoughts manifest in my brain, but the fear radiates from my heart – it’s palpable, I can feel it. This, I have only recently learned, is a form of postnatal anxiety.

Feeling anxious after welcoming a baby is natural and to be expected – you are now in charge of a living, breathing, s**tting human. But when it doesn’t ease after the first few months, and when it affects your day-to-day life, it’s likely to be postnatal anxiety.

I remember calling my mum one winter’s afternoon – the kind where it’s dark at 4:30pm – convinced a stranger had said my name in a coffee shop.

I was terrified he knew where I lived and spent the next few hours camped upstairs with my five-month-old, too afraid to be near the front door.

Even now I still tell my mum: ‘He can’t have known my name?! That can’t have happened’, but the fear made it feel so real. 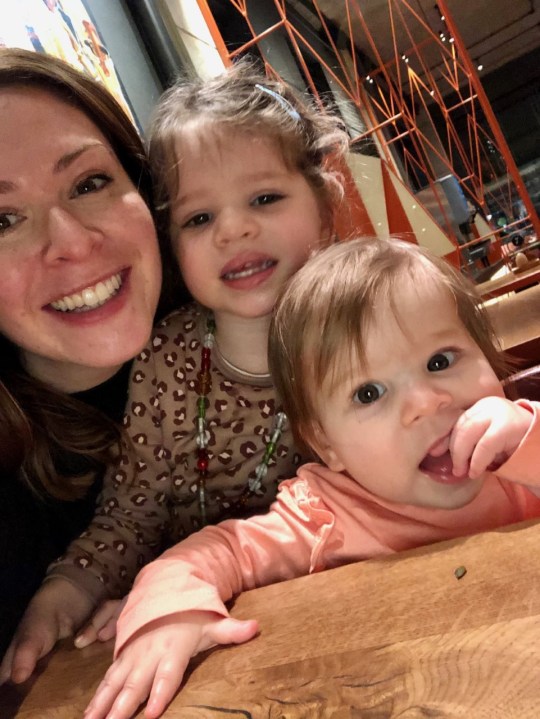 I’d never heard of postnatal anxiety and only found out about it during a chat with a friend (Picture: Darryl Hannah Baker)

I’m a writer so it could be that I simply have an overactive imagination, but ever since childhood I’ve been very afraid of death.

It’s not a full-blown phobia – it doesn’t dictate my life – and it’s certainly not uncommon.

Except, after becoming a mother it peaked, and I’ve been battling dark thoughts on a daily, sometimes hourly, basis.

The scenarios, which come from nowhere and hit me like a baseball bat, always centre on death; me dying, my children dying, or someone I love dying.

In a bid to help keep my brain in a neutral state, I’ve stopped watching anything to do with murder, kidnap, or death. I avoid thrillers, crime dramas and based-on-a-true-story shows as they trigger my imagination into overdrive.

Last year I welcomed a second daughter, Cole, and luckily the anxiety didn’t double. It’s nowhere near as heightened as it was the first time around. 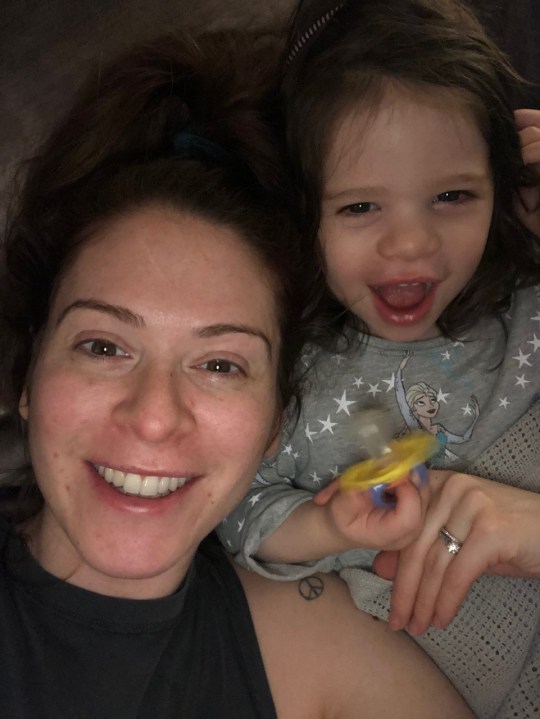 Instead of ignoring it and hiding away, I am determined to give voice to my battle with postnatal anxiety and feel better for doing so (Picture: Darryl Hannah Baker)

But I was oblivious to the fact I was suffering. I didn’t turn to anyone because I failed to connect the onslaught of thoughts and the fact my heart would hammer against my chest.

I’d never heard of postnatal anxiety and only found out about it during a chat with a friend.

In late 2019, on a girls’ night out for my birthday, I confided in one of my closest friends Samantha Braha, a psychologist practitioner, about the horrible visions.

She explained how common my feelings were, and talked me through postnatal anxiety in detail. A single chat saved my sanity.

She told me that it was totally normal, natural and very common for new mums, because anxiety is driven by fear and fear happens when we’re in unknown situations. Motherly instinct and the need to protect can also play a part.

Her explanation was a light bulb moment for me; the clouds parted and I could see the sun again. 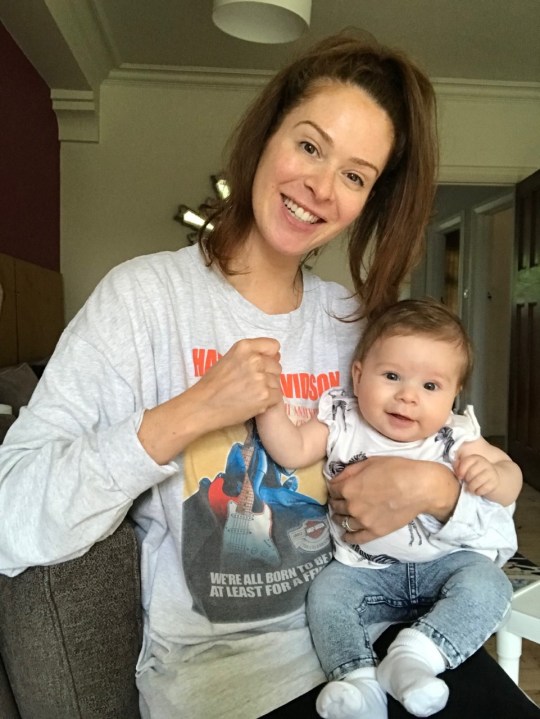 There are still times when it feels like my mind’s unravelling, panicked seconds where I can’t catch hold of the thread to keep it together (Picture: Hannah Darryl Baker)

I sought her advice again recently after seeing one of Kate Lawler’s Instagram posts. The Big Brother winner doesn’t sugar coat motherhood to her followers, and when she discussed feeling confused about sending her daughter Noa to nursery, her words really hit home.

It proved Sam’s point from years ago: ‘it’s so, so common,’ she reaffirmed.

Writing that she ‘can’t wrap her up in cotton wool her entire life’ Kate explained that her anxiety was out of control and she’d been left terrified something bad could happen when she’s not there.

Her words stopped my scrolling in its tracks.

She’d just shared with the entire world the exact thoughts my brain conjures up. Having postnatal anxiety has left me questioning my mind but here’s Kate, normalising these feelings.

She is doing a massive service to mums everywhere with her honesty.

I hope it’s cathartic for you to share Kate because it’s a f**king relief to read and, for me personally, has become the perfect reference to start a conversation on the subject.

There are still times when it feels like my mind’s unravelling, panicked seconds where I can’t catch hold of the thread to keep it together – but I feel a sense of relief knowing that I’m not the odd one out.

Now, when I imagine the worst, instead of drowning in the panic, I simply acknowledge that it’s OK to have intrusive thoughts. The fear no longer lingers.

Instead of ignoring it and hiding away, I am determined to give voice to my battle with postnatal anxiety and feel better for doing so.

I’m not embarrassed, I’m not ashamed and, most importantly, I no longer feel alone in having these thoughts.

A NEW Covid-like virus has been discovered in a bat – raising fears it could infect humans. Scientists…
byBizLifetime
No comments

Man, 36, is first to test positive for monkeypox, Covid & HIV at SAME time

A MAN in Italy has become the first person in the world to test positive for monkeypox, coronavirus…
byBizLifetime
No comments

IF you’ve had Covid and gotten over the nasty bug, you might think you’re out of the woods.…
byBizLifetime
No comments