Where is the best place to put a HRT patch? Expert weighs in

The menopause is front and centre of the conversation right now – in part thanks to Davina McCall’s latest documentary.

But what even are these patches? Essentially, they are one of several ways women can administer this menopause treatment – alongside gels, tablets and even vaginal rings.

HRT patches are worn on the body, and allow the missing hormone oestrogen (and sometimes progesterone) to become absorbed into the skin – hopefully easing distressing and uncomfortable menopause symptoms, such as hot flushes, vaginal dryness and mood swings.

So, where’s the best place to position the patch, to get the desired effect?

Where is the best place to put a HRT patch?

Kegel8’s Intimate Health Expert Stephanie Taylor says that absorption is best achieved when the patch is placed below your waist. 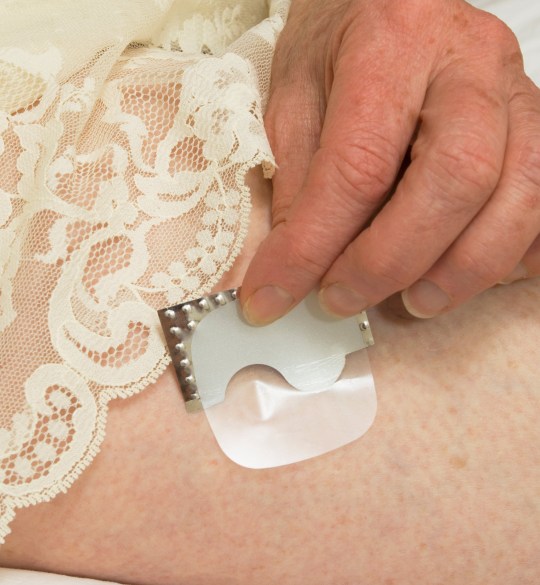 HRT patches should be placed below the waist (Picture: Getty Images/iStockphoto)

‘It is recommended that you apply the patches below the waist to a hairless area of skin, such as the buttocks or thighs,’ she explained to Metro.co.uk.

‘That’s because absorption from the skin can vary depending on where you put it, but studies have found that the hormone absorbs best into fatty tissue found in these areas or the lower abdomen.’

That said, Stephanie notes it’s not a hard-and-fast rule that HRT patches need to be applied here.

She adds: ‘Some women apply them to their arms or between their shoulder blades, which is fine, but this may not have the same absorption rate as below the waist.’

HRT patches should come with instructions for use, and as always: if in doubt, speak to your GP.

Is there anywhere you shouldn’t place a HRT patch?

While ‘below the waist’ is ideal, there are a few places HRT patches definitely shouldn’t go.

Stephanie says it’s absolutely not recommend to put them on, or near, your breasts. This is ‘due to the small risk associated with HRT that could lead to breast cancer’.

Women should also avoid areas of the skin that are oily, broken, irritated or burned. Steer clear of areas where you will be wearing tight clothes, as the patch could rub off.

Typically, you should also alternate where you place your patch when you change it.

Stephanie adds: ‘Patches provide enough medicine for three to four days and need to be changed twice a week, preferably on the same days each week.

‘When changing patches, do not apply it to the same area of skin straight away. Try to alternate where you apply them between a few areas and wait at least a week before applying one to the same area.’

Davina McCall: Sex, Mind And The Menopause airs tonight on Channel 4 at 9pm.

Who is Judge Kathryn Kimball Mizelle?

Table of Contents Hide Who is Judge Kathryn Kimball Mizelle?What did she say about the extended mask mandate?Will…
byBizLifetime
No comments

Should we actually delete our period tracking apps in the UK?

Table of Contents Hide Do we have better data protection in the UK? How do period apps use…
byBizLifetime
No comments

What happens when you call for advice on HPV?

The responses can be disappointing (Picture: Getty/Metro.co.uk) When Henrietta* found out she had HPV, she panicked. The letter…
byBizLifetime
No comments

Table of Contents Hide How do I use the Post Office voucher?How is the £150 paid to me?My…
byBizLifetime
No comments