Babysitter Goes On A 4-Day School Trip, But Mom Still Expects Her To Look After Her Kids

Whether people become parents by their own decision or by accident, the child is their responsibility to take care of. But raising a child is a tiring job, so it’s not surprising they need help. They may turn to their own parents or hire a babysitter so they can have some time off.

Even though there are people who can assist them, parents should always be prepared that those people might not be available all the time and they can’t expect them to, even if they are paying for that service.

Not all parents understand that and a former babysitter shared her story of how an entitled mom searched for her for 3 days so she could look after her children, even though she warned her in advance that she would be out of town.

The Original Poster (OP) shared a memory from her high school years when she used to babysit for neighbors to earn a little bit of money so she could afford books and other things her parents refused to get her, as she explained in one of the responses in the comments.

Babysitting is a quite common job among teenagers as it pays decent money, as various sources show that their hourly rate now can range from $10 to $20 an hour and this kind of job offers schedule flexibility. Also, it’s a bonus if you like being around children. 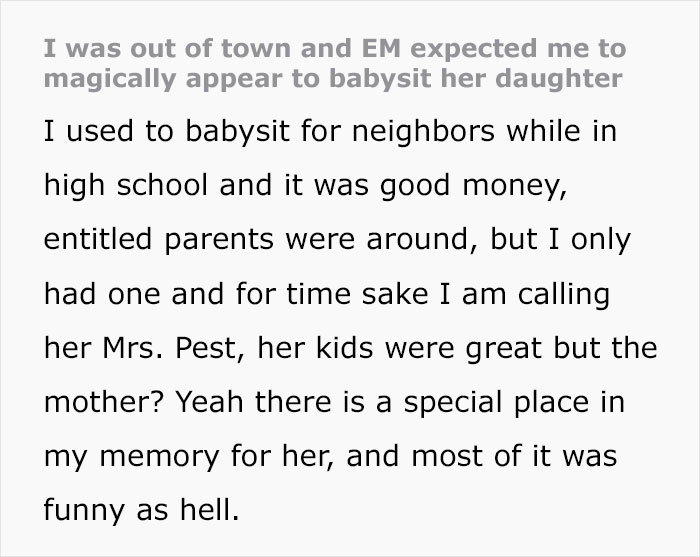 The woman, who was a neighbor, was divorced and had two kids who were not hard to look after 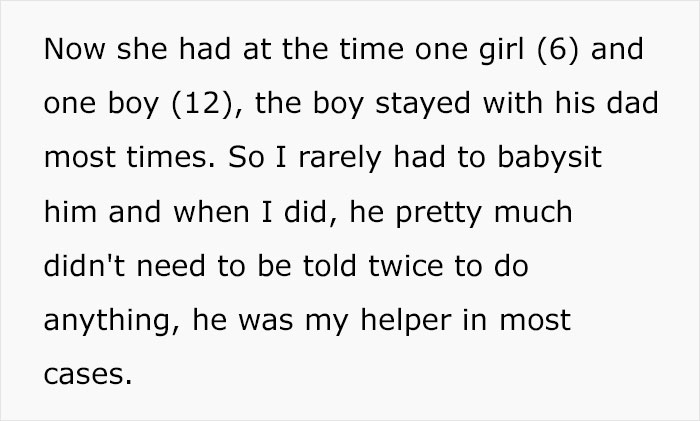 The action of the story takes place in the mid 1990s and the narrator, NagiNaoe101, was about 15 or 16 at the time, going to high school and was a part of their symphonic and jazz bands.

The former babysitter remembers one mom that stood out to her, whom she calls Mrs. Pest in this story. She had two kids and had divorced their father. The OP was mainly looking after the younger one, the 6-year-old girl, because the boy, who was 12, most often stayed with his dad.

The OP says that the children were nice and when the boy was at his mom’s house, he was more of a helper and didn’t need that much attention for himself. But the mom was a whole different story.

She showed her entitlement when the OP needed to go on a 4-day trip to a competition with her school bands. NagiNaoe101 told all the parents that she would not be available between Thursday and Sunday and explained her reason. All the parents wished her luck in the competition except for Mrs. Pest, who, as the OP said, “was in her own universe.” When Bored Panda got in touch with the author of the story, she told us that actually, “the entire neighborhood knew that Mrs. Pest was awful and controlling.” 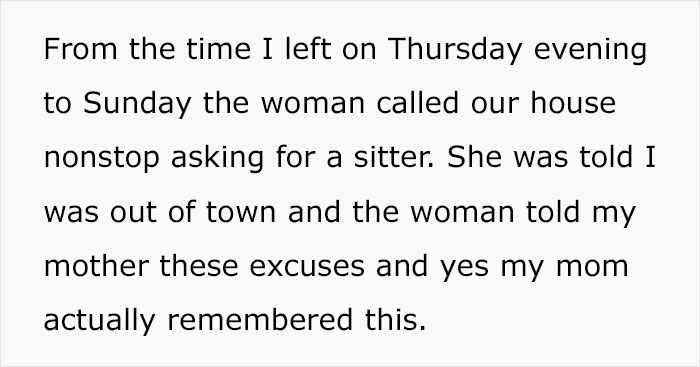 Apparently, Mrs. Pest didn’t comprehend what the OP meant when she said that she would be out of town for 4 days as she still contacted NagiNaoe101’s mom and asked for a babysitter.

At first she called NagiNaoe101’s house and her mom reminded the neighbor that the teenager was at a competition out of town and that she would be back Sunday evening. Mrs. Pest called the house for two days and on Saturday, she came up with the idea to show up physically and ask for someone to babysit her children because she had planned a “ladies’ night out.” The OP’s mom started getting irritated and suggested her ex-husband should take care of his children if Mrs. Pest didn’t have time that night.

The neighbor called the OP’s house two days in a row and then showed up on their doorstep, but the babysitter’s mom repeated the OP was not there

NagiNaoe101 told us that she had an idea of how annoying Mrs. Pest could get as she explained, “Prior to all this, I was warned about how controlling Mrs. Pest was by her exhusband and her current boyfriend. I felt bad for the kids who were not able to get a say in anything.”

This story wasn’t the only case of the mom being unreasonable, “Her annoying behavior did come up many times when I had plans either with school or even college preparations. Mrs. Pest expected me to take the kids with me even to marching competitions or even pepband, which was not OK.” However, this time it was the last straw as the neighbor bothered the OP’s parents. 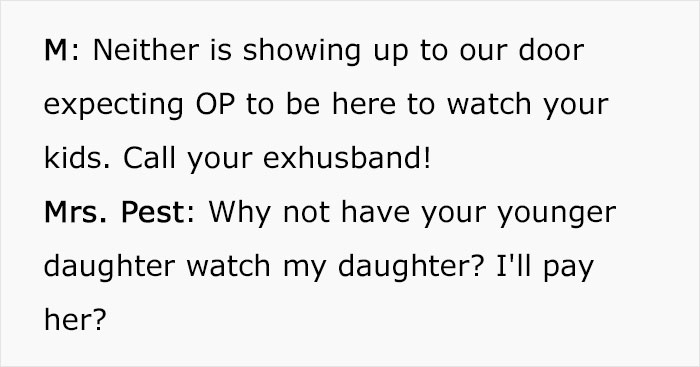 When NagiNaoe101 mom asked her to stop babysitting for this family, she didn’t protest and blacklisted Mrs. Pest, which created an awkward atmosphere, as she was a neighbor so they had to see her every day until the OP’s family moved out. But at least the entitled mom never asked for a babysitter from them again.

In the end, the OP mentions that she didn’t babysit after that, however, it was less connected to the story than you would think. She explained to us, “My final reason for not babysitting came from an incident that Mrs. Pest had no reason to be in. I was babysitting for a friend’s family and the apartment was in the process of being broken into while I was with the kids at the park. We were fine and went to the grandparents. I stopped sitting because that was enough for me and I didn’t want to be in danger. And also my college preparation classes conflicted with many different schedules.”

When the OP came home, her mom told her not to babysit for that neighbor anymore and the teenager didn’t protest 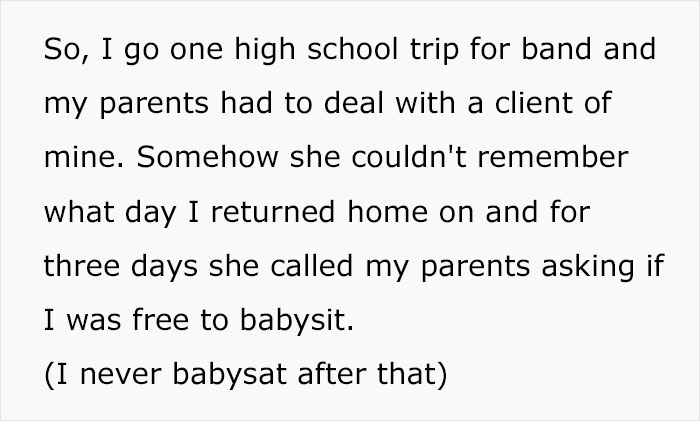 People in the comments were appalled by Mrs. Pest’s entitlement and got an idea why the OP was the only babysitter she had. They didn’t understand how the woman thought that she could snap her fingers and the babysitter had to come to watch her children no matter what.

What did you think of this story? What would have you done in OP’s place? Do you have any similar babysitting stories? Share them in the comments! 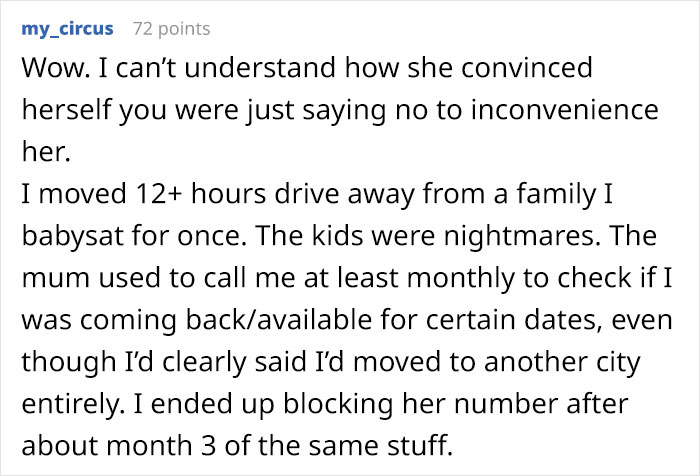 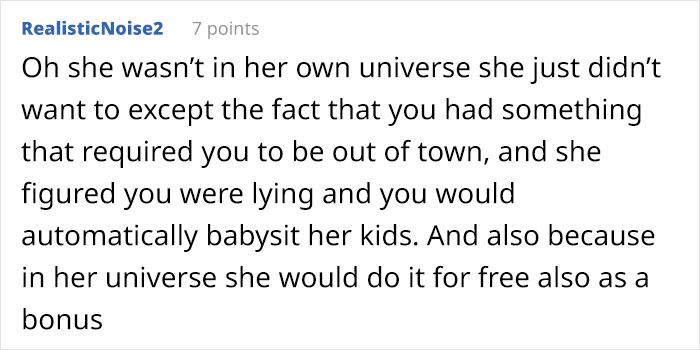 FROM smoke cannons, to exploding balloons, parents-to-be are constantly trying to find new ways to announce the gender…
byBizLifetime
No comments

GIVING birth can be traumatic, so spare a thought for a woman who had to go through it…
byBizLifetime
No comments