Guy Confronts Wife About Her Abusive Discipline Tactics Against His 9-Year-Old, Gets The Silent Treatment

Having a family is so worth it – however, before settling down, it’s significant to understand that you’re ready to give it your all. Your what used to be carefree life will now be full of responsibilities you’re bound to take on for your partner and your children, and it’s essential to acknowledge that you’re, in fact, are willing to put them first.

Life is not all about happiness, and sometimes it gives you the lemons that everyone’s talking about – you might fall out of love or separate due to any other reasons, which means that you’ll have to figure it out and co-parent. It’s stressful and emotional, especially when there are stepparents involved.

This online user took it to one of Reddit’s well-known communities to share a story involving his new wife and her rather abusive ways of disciplining his children. The post received nearly 14K upvotes and 2.6K worth of comments discussing the woman’s unhealthy tactics.

Co-parenting is never too easy, especially when there are stepparents involved

Being a parent is extremely nerve-racking, let alone if you’re separated. It’s in your best interest to find a way and build a friendly relationship with your former partner in order to give your child the life they deserve. There might be a few bumps on the road, especially if you remarry – however, it’s always important to remember to put your kids’ needs first.

The author begins his story by explaining that he and his ex-wife have a 9 y.o. daughter and a 12 y.o. son and that they divorced shortly after their daughter was born. The family was lucky to end things rather peacefully – the OP’s former partner fell out of love and he calmly accepted it – so they still maintain a great relationship.

The man also revealed that co-parenting has been easy for him, as they have 50/50 custody where no authorities were involved. The children spend a week with him and then the next week with their mom, as they live quite nearby. The ex-partners both agreed on a certain discipline method they use on their children, so there’ll be no favoritism involved. 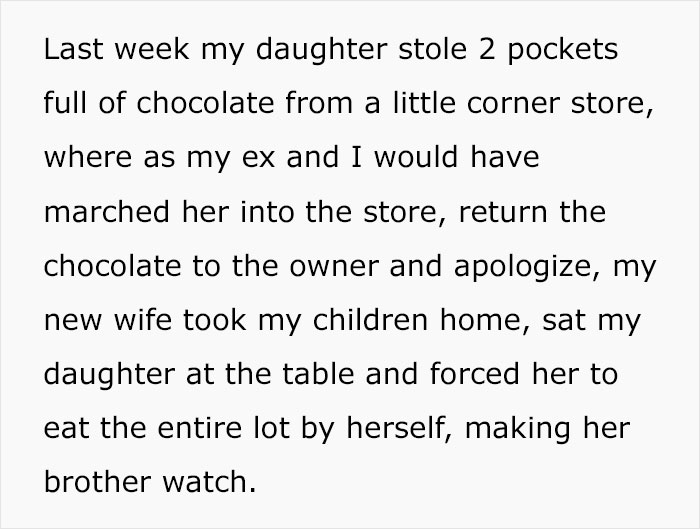 The author has been dating a woman for 7 years and ended up marrying her last year. He mentioned that she was always great with his children – however, everything changed in a moment. The man’s 9-year-old managed to steal a bunch of chocolate from a corner store, and instead of disciplining the girl using the family’s agreed system, the OP’s new partner took his children home and made the daughter eat all the chocolate even after she complained of a belly ache. 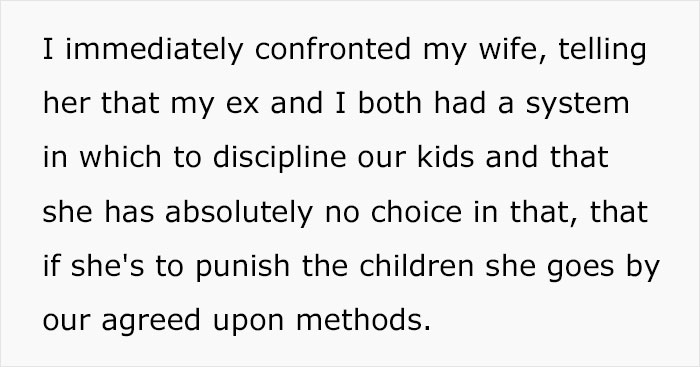 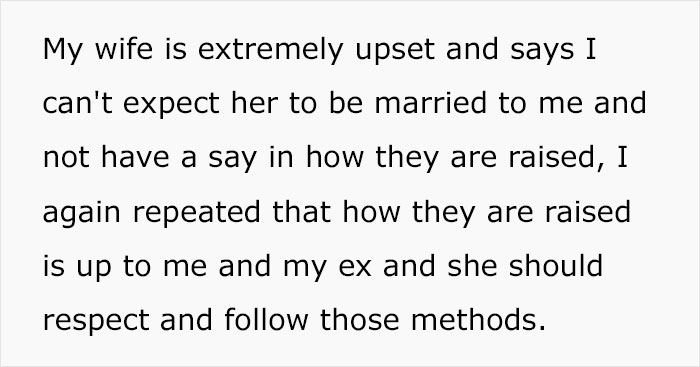 Naturally, as soon as the man found out about his partner’s toxic methods, he confronted her. He explained that he and his ex-wife have a certain tactic they use when their kids misbehave and that she had absolutely no choice in punishing them, especially using such an abusive method. Of course, the author’s wife got upset and said that he can’t expect her to be married to him and not have a say in how the children are raised, to which the man repeated himself and said that she should respect and follow the upbringing techniques he and his ex-wife agreed on. 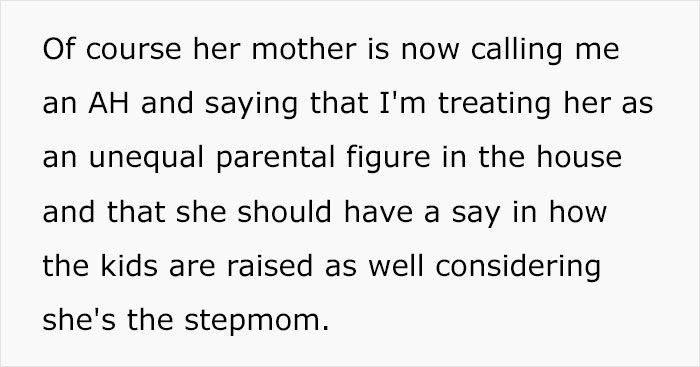 The father-of-two got a few days of the silent treatment and was later left alone as his wife simply couldn’t look at him anymore. Later on, the MIL decided to call and berate him, saying that he was mistreating her daughter by not allowing her to discipline his children. The man also spoke to his ex-wife about this rather uneasy situation and she thanked him for being so defensive of their choices. 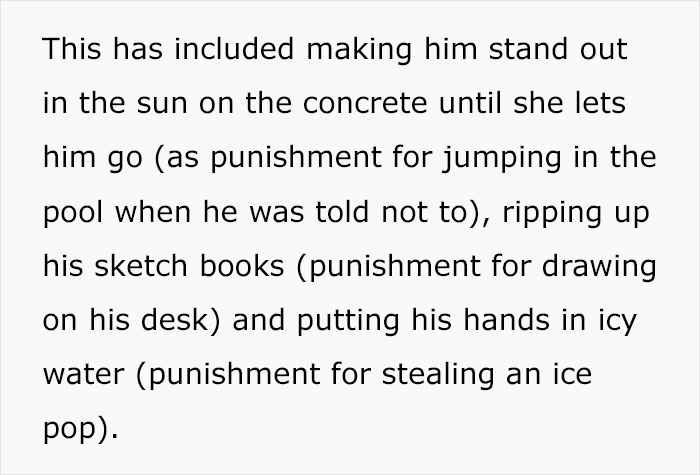 The OP later updated the post to let the readers know that, just as they’ve suspected, his new partner was also using these abusive punishment methods on his 12-year-old son. For instance, he was forced to stand on burning concrete when he jumped into the pool when he was told not to, the woman also managed to rip his sketchbook because he once drew on a desk, etc. 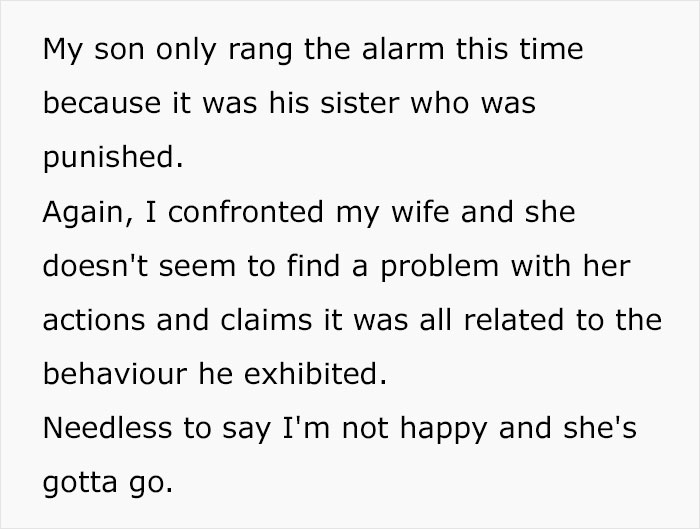 Moreover, the man revealed that his son decided to tell on his stepmom simply because he saw his little sister being punished. So, once again, he confronted his wife, though unfortunately, she didn’t seem to find a problem with her toxic and inappropriate actions. 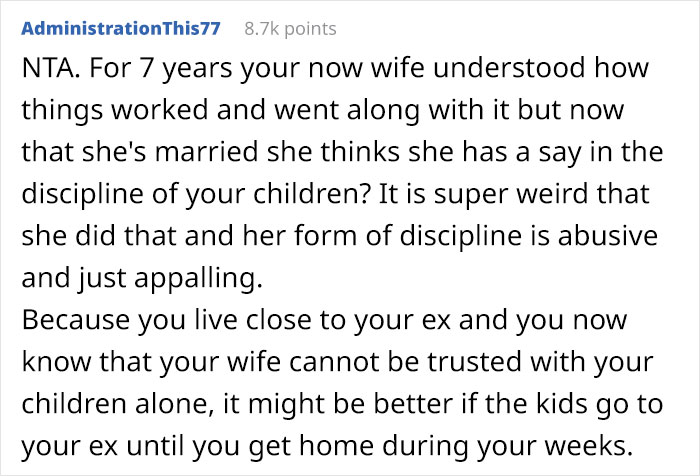 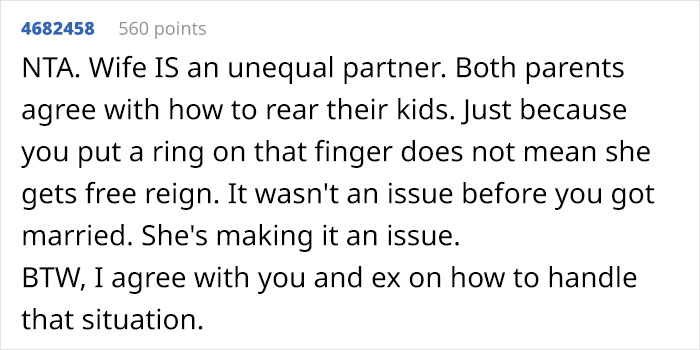 ALL parents will understand the frustration of trying to get your child to speak, but not having any…
byBizLifetime
No comments