Lawmakers in Alabama passed two bills that would limit healthcare for transgender youth, and also force teachers to out students to their parents (Picture: Getty Images/Reuters)

Lawmakers in Alabama on Thursday passed two bills that would criminalize gender-affirming healthcare for transgender youth and force teachers or counselors to out any transgender students to their parents.

The legislation passed by the state’s House of Representatives in a 66 to 28 vote, and is the latest measure passed in Republican-led state that impacts transgender youth.

If signed into law by Republican Governor Kay Ivey, the Alabama Vulnerable Child Compassion and Protection Act would make it a felony punishable with up to 10 years in prison to provide medical care. That would include providing hormone treatment, puberty blockers and gender reassignment surgery to minors.

The bill would also prohibit public and private school administrators and other staff from withholding information from a parent or legal guardian ‘related to a minor’s perception that his or her gender or sex is inconsistent with his or her sex.’ 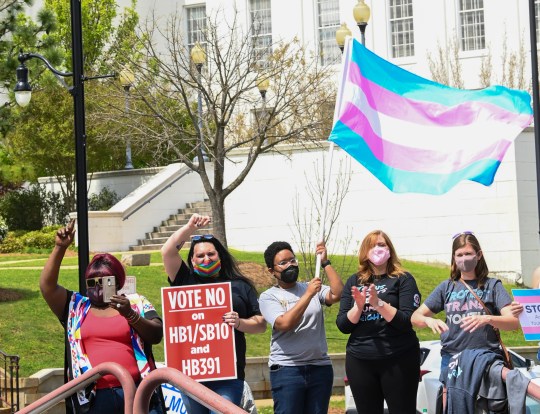 The governor has not said whether she would sign the bill, but last year she signed one barring transgender athletes from school sports.

State Representative Neil Rafferty, who is the only openly gay member of the Legislature, called the bill ‘invasive,’ and said the ban would make life harder for young LGBTQ+ people, according to AL.com.

‘It’s hard enough growing up being different. It’s even harder growing up being different and then have the state legislature, your elected officials, the leaders of this state, put a target on children’s backs. Put a target on the parents’ backs. And once again, get in the middle of their decisions and say you don’t know what to do. You don’t know what’s best,’ Rafferty said.

The State Representative who sponsored the bill for the past three years, Wes Allen, says it’s about protecting minors.

‘It’s about protecting these minors,’ Allen said. ‘And it’s not about adults, but it’s about those minors. Their minds are not fully developed to make these decisions on these medications and surgeries.’

Allen said he had talked to doctors who opposed his bill but had not talked to transgender youth.

The American Academy of Pediatrics and the Alabama Chapter of the AAP issued a statement about legislation passing, saying they have repeatedly opposed bills that discriminate against transgender youth and their right to receive medical care.

According to the organizations, studies show that gender-affirming healthcare can reduce emotional distress, improve a sense of well-being and reduce the risk of suicide.

Alabama’s legislation is the latest in a wave of bills pushed by Republican lawmakers that limit medical care for transgender youth and prevent discussion of sexuality and gender identitiy in schools.

Who is Mick Jagger’s girlfriend Melanie Hamrick? – The Sun

Table of Contents Hide Who is Melanie Hamrick?How did she meet Mick Jagger?READ MORE ABOUT CELEBRITIESAre they still…
byBizLifetime
No comments

£2 million of watercolours saved from trash by mechanic

Jared Whipple had only been searching for car parts (Picture: Jared Whipple) A mechanic went hunting for car…
byBizLifetime
No comments