President Joe Biden did not walk back on comments he improvised over the weekend about Russian President Vladimir Putin (Pictures: AP/Reuters)

President Joe Biden did not take back comments he made over the weekend that Russian President Vladimir Putin ‘cannot remain in power,’ and clarified that the administration has not changed its stance on Russia.

‘I’m not walking anything back,’ Biden said Monday. ‘The fact of the matter is I was expressing the moral outrage I felt toward the way Putin is dealing and the actions of this man, which is just brutality.’

‘I want to make it clear, I wasn’t then nor am I now articulating a policy change,’ Biden said.

An improvised comment about Putin, in which Biden said, ‘For God’s sake this man cannot remain in power,’ has hung above the White House since the weekend. 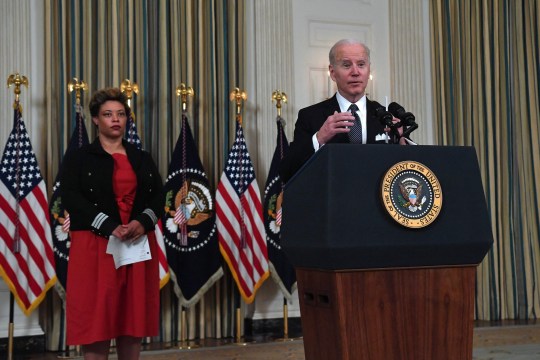 On Monday, the President said he wouldn’t walk back on the comments, but clarified the administration’s position on Putin has not changed (Picture: Getty Images)

The White House and Biden have since made efforts to clarify is commentary, which was made at the end of capstone address in Warsaw. The White House has said that Biden was not calling for regime change to remove Putin from power, but instead that he was saying Putin cannot be allowed to exercise power over neighboring nations.

When asked why he improvised the ending portion of his speech, Biden said he was speaking directly to the Russian people.

‘The last part of the speech was talking to Russian people,’ he said.

‘I was communicating this to, not only the Russian people but the whole world. This is, this is just stating a simple fact that this kind of behavior is totally unacceptable. Totally unacceptable. And the way to deal with it is to strengthen and keep NATO completely united and help Ukraine where we can.’

He emphasized that he was speaking from the heart after meeting with Ukrainian refugees in Warsaw.

‘I’d just come from being with those families,’ he said, adding, ‘I make no apologies for it.’

Biden was asked whether he would meet with Putin and did not directly answer yes or no, saying it would be conditional on what the Russian leader would want to discuss. The Russian leader has not called for a meeting.

A monkey was spotted taking a puppy for a walk in a park in Bangladesh (Picture: Getty) A…
byBizLifetime
No comments

Much of the Queen’s memorabilia is being sold online (Picture: eBay/Rex) Wristbands given to people queuing up to…
byBizLifetime
No comments

Dominique Metzger claims officers asked what punishment she would prefer (Picture: Twitter) A TV reporter says she was…
byBizLifetime
No comments