British vintage rally driver Barbara Shooter took it on herself to pick up a Ukrainian family she was matched with as she waited for their visas (Picture: Barbara Shooter/Opora.uk)

A vintage rally driver made a week-long round trip to Poland to pick up a Ukrainian family she is hosting after becoming frustrated with the British government’s sponsorship scheme.

Barbara Shooter was matched with the ‘incredibly brave’ mother and teenage son by the UK-based Opora charity and they are now settling at her home in Steeple Aston, North Oxfordshire.

As the pair made a perilous journey of several days towards Poland, she drove out to meet them in a Range Rover full of supplies to drop off at the border – despite their visas not having been processed under the Ukraine Sponsorship Scheme.

Barbara, an endurance rally driver, said it was a ‘rollercoaster’ ride of emotions to bring Yuliia, 47, and her 13-year-old son Alex to the UK, which included an emotional meeting at the frontier crossing.

They had lived in Zaporizhia on the Dnipro river in south-eastern Ukraine, where Russia has been accused of bombarding humanitarian convoys and carrying out kidnappings in occupied areas.

The mother and son took cover in a cellar when the invasion began 48 days ago before moving to a location in the countryside and registering with Opora, which is helping Ukrainians to rebuild their lives in the UK.

After matching with the refugees, Barbara applied to the sponsorship programme, also known as the Homes for Ukraine scheme, which she found to be bureaucratic and time-consuming. 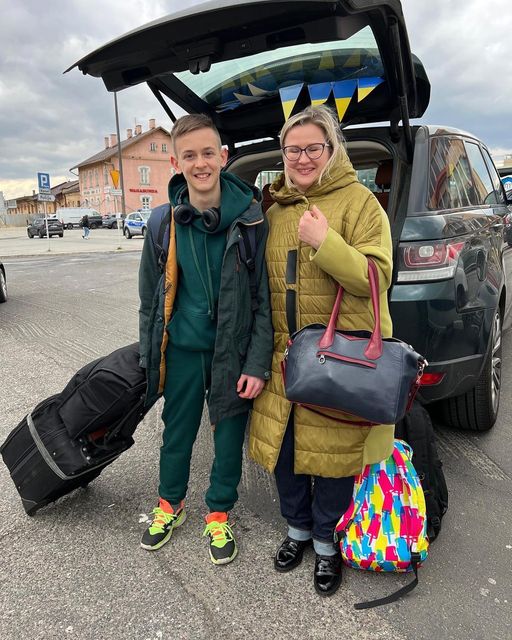 Yuliia and Alex met their British sponsor at a crossing into Poland after leaving behind their home in Ukraine (Picture: Barbara Shooter/Opora.uk)

She said: ‘We WhatsApped a couple of times and Yuliia was unsure of what to do. If it was just her, she would have stayed in Ukraine because her parents won’t leave.

‘But she wants her son to have a future. It was a terrifying prospect leaving everything behind and not knowing what they were coming to, but she took that leap of faith and we started off the sponsorship programme.

‘The whole experience was a nightmare, each family member has to fill out a 30-page form in English and all the documents have to be uploaded to a system which doesn’t allow you to track them.

‘Fortunately, Yuliia has good English but for someone who doesn’t, it would be impossible. People who are fleeing for their lives could wait for weeks to find their applications have not been through the system.’

The mother and son began their journey towards the Polish border before the visas were granted while their prospective sponsor spent several nights at hotels in Poland as she waited for them.

Barbara, 65, said: ‘With the documents going through I didn’t want them to have to sleep in a school hall for ages. I thought, “I can do this, I can fetch them” and I could take some aid over as well.

‘I drive vintage cars all over the world so the distance didn’t bother me. I felt it was just something I could do.’ 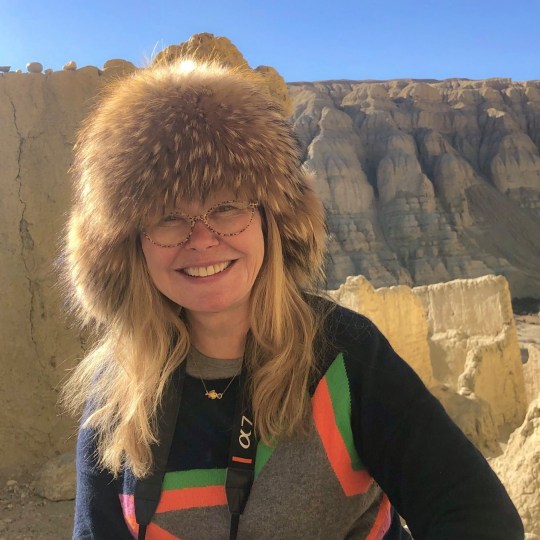 Barbara Shooter set off by road to pick up her Ukrainian guests as she grew impatient with the wait for visas (Picture: Barbara Shooter/JustGiving)

After taking advice from Banbury’s Polish community, she left with her son, Henry Harding, in the SUV full of supplies on Sunday, April 3 and arrived in Poland the following Tuesday.

They dropped the aid off in Przemyśl with a Ukrainian man heading over the border around 14km to the east, restocking with food at a cash and carry to help him fill up his van. Henry flew back to the UK after two days.

Meanwhile, Yuliia and Alex arrived in Lviv, the main gateway for refugees in western Ukraine, before taking a bus over the border to Rzeszow.

‘It breaks your heart to see all the women, children, grannies and the odd granddad pouring over the border,’ Barbara said. 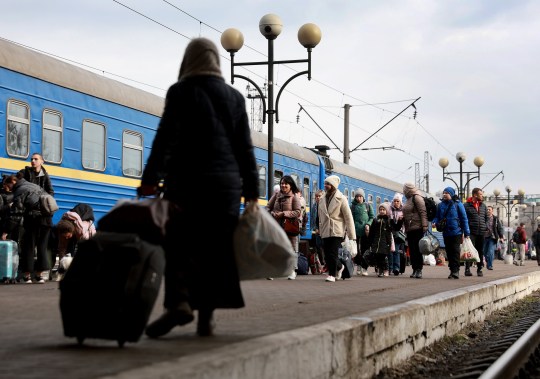 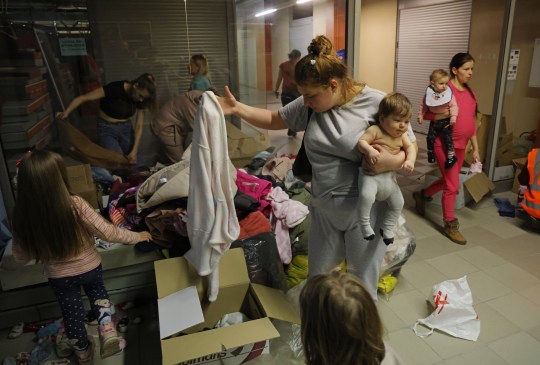 Women and children who have fled Ukraine sift through donated clothes at a shelter in Rzeszow (Picture: Sean Gallup/Getty Images)

‘I feel quite tearful even thinking about it. Yuliia and Alex had made a hazardous journey lasting several days and it was absolutely fabulous and quite emotional to meet them. They could only bring what they could carry, which wasn’t very much, only a little suitcase and some backpacks.

‘The first night when we were having something to eat Alex said how quiet it was without the shelling, air raid sirens and noise.

‘As we were having dinner, the emails came through giving them the authority to travel. It was quite a moment on a rollercoaster ride while we waited for the visas. Up to that point, we weren’t even sure if the applications were going through or not.’

After spending a night in Krakow, where the group went sightseeing and got to know each other better, they arrived in Steeple Aston on Saturday.

Yuliia and Alex are living with Barbara and her husband Adrian, with the village rallying welcoming the newcomers through a JustGiving page.

‘They are incredibly brave and it’s humbling that they have entrusted me with their new lives,’ Barbara said.

‘Alex is treating it like a big adventure and his mother is in constant touch with relatives in Ukraine, as it’s still a very anxious time for her. He had been doing distance learning and at one point it was cancelled because of shelling, which shows how awful the situation is where they have come from.

‘A lot of people feel they want to do something to help and we’re lucky enough to have a house big enough to welcome them. It’s only two people, but it was just something we could do.’ 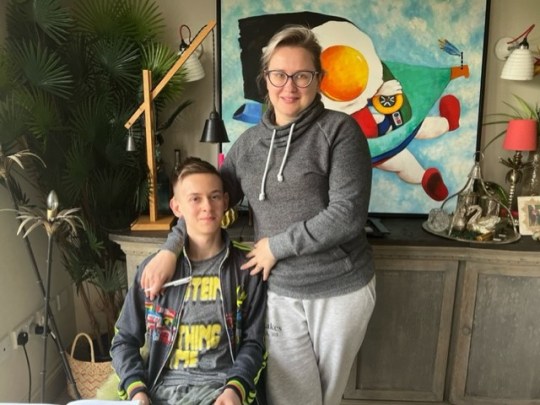 Barbara also expressed her thanks to the Opora community, which offers support for Ukrainians and their families in the UK as well as an online platform for sponsors to match with people leaving the country.

Other British families have complained about long waits for documents under the government’s Homes for Ukraine scheme.

Around 12,500 visas have been issued to Ukrainians under the programme but only 10% of that number have arrived in the country.

On Friday, Home Secretary Priti Patel apologised for the delays and said the application scheme was being ‘streamlined’ and the UK would ‘absolutely see changes in numbers’ of people given refuge.

Home Office minister Kit Malthouse then said the scheme was ‘motoring’, with Refugees Minister Lord Harrington aiming to have applications processed within 48 hours.

How did Prince Harry and Meghan Markle meet, and when did they marry?

Meghan Markle and Prince Harry at the Invictus Games (Picture: Karwai Tang/WireImage) It feels like Prince Harry and…
byBizLifetime
No comments

I spent £50,000 on an extension but council is making me DEMOLISH it… I can’t sleep over it

A GRANDMA is being forced to demolish her £50,000 extension by the local council. Linda Webb, 66, is…
byBizLifetime
No comments

Set For Life draw tonight, May 26