Hourari Benkada sat next to the man who released a smoke bomb before opening fire in a crowded Brooklyn subway on Tuesday (Pictures: CNN/AP/Getty)

A 27-year-old who claims he sat next to the man who carried out the Brooklyn subway shooting on Tuesday now says he never wants to ride the train again.

While recovering from being shot in the back of his knee, Hourari Benkada gave an interview with CNN from his hospital bed in which he detailed the harrowing commute where he and nine other people were shot in a Brooklyn subway station.

‘This makes me want to never ride a train ever again in my life,’ Benkada told CNN via FaceTime.

Benkada says he was minding his business when he boarded the N train at 59th Street, but later noticed the man sitting next to him release a ‘smoke bomb’ as the subway car slowly pulled into the 36th Street station. 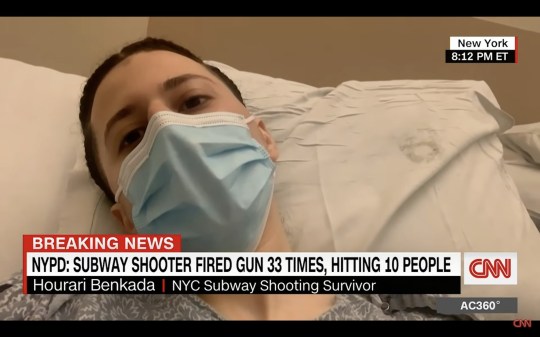 Benkada was shot in the back of his knee on Tuesday while riding on the subway in Brooklyn (Picture: CNN)

As smoke filled the subway car Benkada immediately went to help a woman sitting to his left who he noticed was pregnant. The two were shoved around by the panicked crowd as the gunman opened fire both in the car and on the subway platform, injuring 29 people in total.

After he helped the pregnant woman safely get off the train a bullet hit him in the back of his knee and exited his body on the other side.

‘The worst pain of my entire life,’ said Benkada, who was on his way to work at the New Yorker Hotel where he is a housekeeping manager. ‘I was just so shocked that the pain didn’t hit me until after.’

Still noticeably shaken from the incident, Benkada added, ‘I don’t even know how I’m holding my phone’ as he described how he remembered the events unfold. 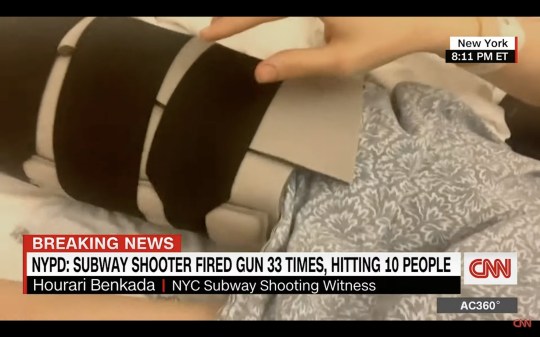 The bullet went straight through the back of Benkada’s knee (Picture: CNN)

‘All you see is black smoke after the smoke bomb went off. People rushing to the back,’ he told CNN. ‘I think the gun jammed. I think he had an extended clip or something, because I’ve never heard that many shots come off a handgun.’

Officials have said they recovered a gun from the scene that had been jammed, and believe it may have prevented the gunman from injuring more people.

‘It sounded like the loudest thing I’ve ever heard in my life,’ he added.

Benkada said it felt like an entire minute between when the gunman began shooting and when the train had fully pulled into the station and opened the doors, allowing panicked passengers to run from the gunfire.

Over 24 hours later police remain searching for the suspect, who has been described as a black male with a ‘heavy build,’ weighing about 170 pounds and standing at 5 foot 5 inches tall.

The man police are looking for was wearing a gas mask and green MTA construction vest over a gray hooded sweatshirt at the time of the attack.

Police have named one suspect in their investigation, Frank R James, a 62-year-old man with addresses in Wisconsin and Philadelphia who has uploaded videos to social media discussing mass shootings and violence.

In one of his videos, James also criticized New York City Mayor Eric Adams’ stance on homelessness and other public safety policies. In a separate video he discussed his desires to commit violence against certain societal and racial groups.

James was named a person of interest in the case after authorities discovered he had rented a U-Haul van whose keys were found at the scene of the crime. The van was later found empty, several miles away from the scene.

There is currently a $50,000 reward for any information that will lead to James’ whereabouts.

Pictured: ‘Perfect’ mum stabbed to death alongside son, 5, at their home

Tributes have been pouring in for Yi Chen, 37, and her five-year-old boy (Picture: PA) A ‘doting mother’…
byBizLifetime
No comments

What is the four-day work week trial and are you paid the same?