Chicken could become a ‘luxury meat’ as expensive as beef

Chicken is the country’s most popular meat (Picture: Getty)

Chicken could soon become as costly as beef thanks to production costs soaring, a supermarket boss has warned.

The nation’s meat of choice is likely to continue rising in price as the cost of living crisis worsens, Co-op’s chief executive said.

The market for chicken – a firm favourite on British menus partly because it is affordable – is expected to face challenges that other meats will not.

The rocketing cost of bird feed has posed a challenge to the poultry industry – and the rising price of the meat is only expected to continue at supermarkets and restaurants, industry insiders say.

‘Chicken could become as expensive as beef. The chicken industry has particular challenges because of the feed costs,’ Co-op’s Steve Murrells told The Sunday Times.

‘The majority of cattle raised in this country are fed grass and it is not required to have high-dense feed.

‘Chicken, which was incredibly cheap and great value for money, is rising quicker than any other protein.’ 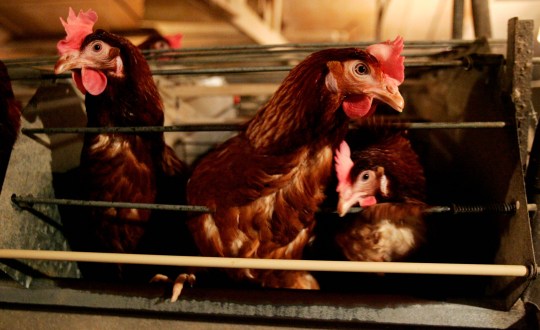 The cost of rearing a chicken has risen by almost 50% in the past year, which has further been exacerbated by the Russia-Ukraine war.

Chicken feed is made primarily from soya, sunflower meal and wheat, all of which have risen in price in recent months.

Russia and Ukraine are both major exporters of sunflower oil, which sunflower meal is a byproduct of, and wheat.

The average retail price of chicken has increased by 19% per kilogram from March 2020 to March 2021 – while beef has risen by 3%, according to the Office for National Statistics.


The prices of both meats closely matched on top-end products such as organic ranges, with the cost of chicken set to overtake that of beef.

Mr Murrells, who has also worked as a senior manager as Sainsbury’s and Tesco, said the price hike may see customers reconsider their meat consumption.

‘They’ll buy a chicken, they’ll have it for a roast on a Sunday, but then they’ll use the giblets and whatever to make a soup. Customers will find creative ways of making food last longer.’

I’m being eaten alive by spiders infesting my home

Billy Brown took down a swastika flag which was flying at his home in Newcastle (Picture: NCJMedia Ltd)…
byBizLifetime
No comments

The private school being sued by Michelle Obama’s brother filed a motion to dismiss the lawsuit (Pictures: CNN)…
byBizLifetime
No comments