Children hospitalized after drinking from milk cartons with sanitizer

At least 25 children in pre-K and kindergarten were hospitalized in New Jersey after drinking from milk cartons that were mistakenly filled with sanitizer.

Students at the Early Childhood Development Center in Camden ingested ‘non-toxic consumable sanitizer’ and were transported to a nearby hospital out of an abundance of caution, the Camden City School District shared on Facebook on Wednesday.

The school district investigated a ‘possible contamination of milk’.

School officials said the sanitizer is used to clean machines before stocking them with milk. However, the cartons in the accident were filled with sanitizer, sealed and sent out with other milk containers. 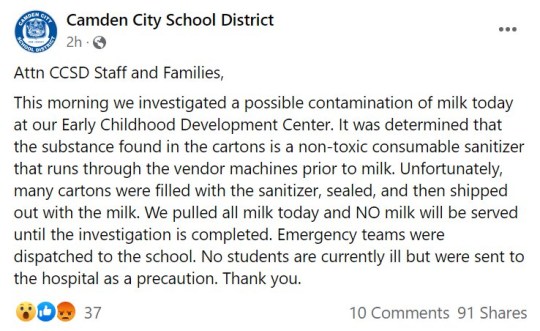 The Camden City School District shared on Facebook that it investigated a ‘possible contamination of milk’ (Picture: Facebook)

‘It was determined that the substance found in the cartons is a non-toxic consumable sanitizer that runs through the vendor machines prior to milk,’ the district wrote.

‘Unfortunately, many cartons were filled with the sanitizer, sealed and then shipped out with the milk. We pulled all milk today and NO milk will be served until the investigation is completed.’

Emergency responders arrived at the campus. ‘No students are currently ill but were sent to the hospital as a precaution,’ the district wrote.

An unfamiliar smell near the milk is what led school staff to detect the mix-up, according to CBS 3. Some students at the hospital were seen leaving the emergency room.

Torey Daniel, whose son Raymeer Bacon-El, 7, attends Riletta Twyne Cream Early Childhood Center in Camden, said she got a phone call from the school district on Wednesday morning after he drank contaminated milk and had some symptoms.

‘When that message said that the milk was contaminated with a sanitation cleaning product, that’s not going to sit well with any parent,’ Daniel told CBS 3.

The mother was especially worried because her son is in remission after being diagnosed with cancer when he was four months old.

‘I am feeling a little bit better,’ Bacon-El said.

The number of milk cartons affected was not immediately known.

Prince Edward and Sophie’s seven day tour is in honour of the Queen’s Platinum Jubilee this year (Picture:…
byBizLifetime
No comments

Queen dead: When do the 10 days of mourning end?

The pupil believed the burger was ‘raw and undercooked’ (Pictures: BPM Media) A school has defended serving a…
byBizLifetime
No comments