DRAMATIC pictures shows a huge blaze raging across a Devon mountainside as firefighters battle to keep the flames under control.

Video taken near Tungsten West Mine at Hemerdon in Dartmoor National Park shows a huge fire and billowing smoke engulfing the hillside. 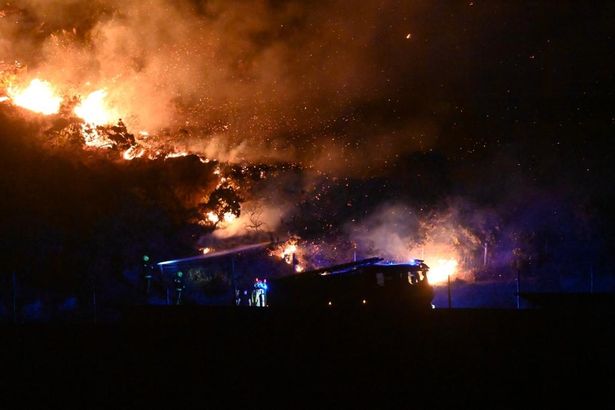 As one inferno now stands at 750m, fire crews have deemed the blazes across Dartmoor a “major incident”.

Emergency services were alerted to reports of a fire at 4.15pm today.

Firefighters are working desperately to contain the blaze and prevent flames from spreading past the A386.

Police and a mountain rescue team have linked up with fire crews at a separate blaze near Mary Tavy firefighters.

A command centre has been set up on Brentor Road as authorities work to ensure public safety.

A spokesperson for Devon and Somerset Fire and Rescue said: “We have 12 fire appliances there at the moment plus special appliances. There’s a fire front of about 750 metres.

“Firefighters are using fire beaters and wild fire vehicles to prevent it spreading and crossing the A386. The A386 is closed in that area.

“There are a number of controlled fires burns going up on Dartmoor but this one has been going since about 4.15pm initially.

Devon County Council issued a warning to drivers to find alternative routes and to expect delays in the area.

A council spokesperson tweeted: “The police have requested a full road closure with diversions on the A386 north of Mary Tavy due to a gorse fire.

“Expect delays and find an alternative route where possible.”

American woman stays in $1,300 a night AirBnb in shop window

The AirBnb listing was meant to be a joke (Picture: Newsflash) AirBnb is known for its wacky places…
byBizLifetime
No comments

A LUCKY EuroMillions player will walk away with one of the biggest prizes ever in tonight’s draw. The…
byBizLifetime
No comments

A possible male skeleton, aged 17-25, found with a iron spear point imbedded into the thoracic vertebra, excavated…
byBizLifetime
No comments