AS the noise of battle subsided and hundreds of Argentine troops surrendered, Paratrooper Jimmy Goodall looked at the handful of farm buildings in Goose Green and found himself suddenly overwhelmed with doubt.

Why had they been fighting for the Falklands, a group of small islands in the South Atlantic 8,000 miles from the UK? 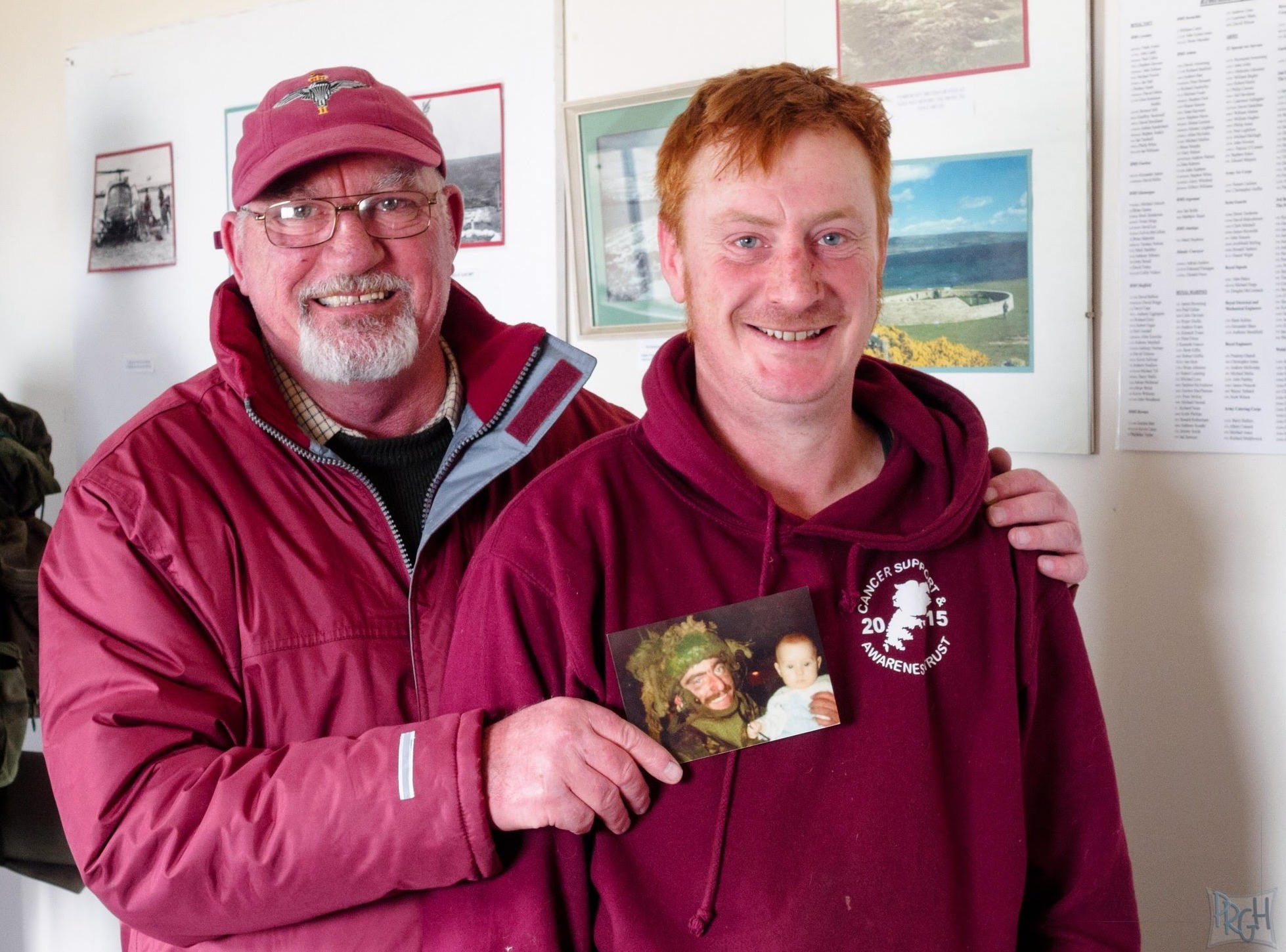 The aftermath of the Battle of Goose Green and all the death and terror it had broughtCredit: Alamy

What had all the death, terror and struggle of the previous three days been for? His commanding officer, Lieutenant-Colonel H Jones and 15 of his comrades from 2 Para lay dead, along with a commando sapper and Royal Marines helicopter pilot.

Then Jimmy witnessed the joy of freedom in the eyes of the 114 Islanders who had been held at gunpoint for almost a month, crammed by their Argentine captors into the local community centre.

The battle-weary lance-corporal also saw the sheer relief on the face of mum June McMullen, who was cradling her baby son, Matthew.

At that moment he knew why he was there. 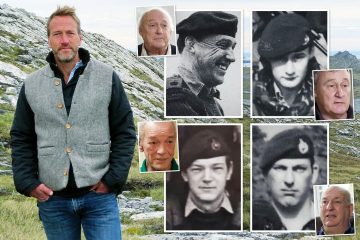 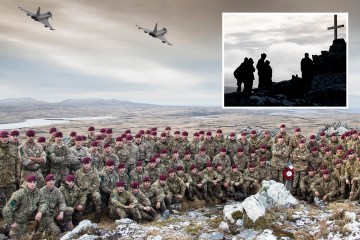 Jimmy, now 67, recalls: “I was absolutely knackered and, of course, after the battle you see all the devastation, with bodies everywhere, and bits of bodies too, and you think to yourself, ‘What the hell is this all about?’

“At just four months old, Matthew was the youngest of the internees and he had actually been kept under the floorboards for safe-keeping during the battle.

“I was stinking and in rag order. I hadn’t had a wash for a week and when Matthew was handed to me, I just looked at him and thought, ‘This is it — this is what it’s about’.

“From that moment on I was absolutely OK with what we were doing. It all fell into place.”

As one of the first liberators into Goose Green, Jimmy had his photo taken with Matthew.

He says: “It was all just a mixture of euphoria and relief.

“We were milling around and these civilians were absolutely ecstatic because they had just been released from this tiny community centre.

“And we could not believe that they had been kept cooped up like that for a month while the Argentines kept pulling them out for mock executions and that kind of thing.

“Then, in the general melee, I ended up holding Matthew and one of the lads said, ‘I’ll take a photo of you’.”

That picture, taken on May 29, 1982, was even more poignant because back in the UK, Jimmy’s wife Mary was heavily pregnant with their third child.

And by the time Jimmy arrived in Falklands capital Stanley on June 14, his son had been born.

Jimmy says: “I got home before his birth was registered and I named my new son after baby Matthew at Goose Green.”

Years later, Jimmy, from Stockton-on-Tees, Co Durham, returned to the Falklands and to the cemetery above San Carlos Water where his comrades are buried.

It was here he discovered that baby Matthew had grown into a strapping young farmer who now owns the Kingsford Valley Farm on which the cemetery is sited. On his return to England Jimmy made contact via the internet and told Matthew about the remarkable photo.

The two men stayed in touch over Facebook and they met up when Jimmy recently returned for a second time.

His fellow veterans decided they should recreate the photo, with Jimmy holding Matthew.

But when they met it was clear this was not going to happen.

Jimmy says: “He’s huge now! I couldn’t pick him up. He could pick me up.” With the help of his 81-year-old father Tony, Matthew runs the 20,000-acre sheep farm which leads down to Blue Beach where Jimmy and his   comrades from 2 Para Assault Engineers had come ashore on May 21, 1982.

Jimmy recalls: “When I came off the landing craft I was carrying the radio, ten pounds of PE4 [plastic explosives] in eight-ounce sticks, bandoliers across my chest, and a Blowpipe missile strapped on my shoulders.

“We were carrying them for the artillery and were supposed to drop them off at the bottom of Sussex Mountains, but they couldn’t carry them up the mountains so we had to.

“I think I was carrying about 160 pounds initially, what with all my personal kit too.”

After five days trying to stave off hypothermia on the snow-covered mountain, the men of 2 Para moved off for the eight-mile trek to Camilla Creek House, ready for their advance on the Argentine-held settlements of Darwin and Goose Green.

In one of the decisive battles of the Falklands War, the 450 men of 2 Para overwhelmed an Argentine force almost three times as big to seize the settlements, and took more than 950 enemy troops captive.

During the two-day battle Colonel Jones led an unsuccessful charge up a gully to clear an enemy trench as A and B Companies became bogged down.

He was hit once, fell, got up, was hit again and fell metres short of the trench, shot in the back and the groin, and died within minutes.

Three of his men were killed when they followed his charge. Jones was posthumously awarded the Victoria Cross. Jimmy spent much of the battle attached to C Company, which led the assault into Goose Green.

He remembers jumping into an Argentine trench, shooting one enemy soldier in the thigh and taking him and another soldier prisoner.

‘Lying in the mud and hoping for the best’

He then had to ward off angry colleagues who were ready to kill both prisoners following an incident in the battle when some Argentines had flown a white flag, then shot dead the Paras who came forward to accept their surrender.

When the battle was finally won, Jimmy was among the first British soldiers into Goose Green — just a handful of houses, farm buildings and sheep sheds. The Paras were amazed when more than 100 islanders — men, women and children — came out of the small community centre where they had been held captive for almost a month.

Argentine soldiers had denied the captives decent food or toilet facilities and even searched Matthew’s nappies.

Among the children held at Goose Green was Kevin Hewitt, who celebrated his 11th birthday in captivity.

Now a 50-year-old carpenter living in West Wellow, Hants, Kevin reveals how the Argentines suspected the children of being spies.

He says: “They made strange taps on the heels of our shoes to make sure they weren’t hollow, in case we were hiding a radio transmitter to communicate with the British.

“They were very strict. They only let us out for five minutes a day and soldiers were guarding every door.

“There were one or two toilets in the hall but no baths, showers or sinks. There were 114 people in there so it was pretty grim.”

It was not until the settlement was taken back by paratroopers that the 114 captives were able to leave — a debt the Falkland Islanders of that era will never forget.

Kevin says: “My dad had cut two holes into the old timber floor and when British forces were near, we hid underneath them, lying in the mud and hoping for the best.

“When we were released I remember seeing this funny-looking chap in a jumpsuit with a handlebar moustache.

“I thought he was from World War Two but he was a pilot.

“We will never forget the sacrifices the British forces made and those who lost their lives to give us a normal life.

“At times I feel guilty for having a nice life because so many died for our freedom, but I hope their families know they fought for what was right and for that we are eternally grateful.”

THE BATTLE OF GOOSE GREEN

Jimmy Goodall stayed in the Army until four years after the Falklands War and later spent 24 years in the prison service.

But he will not be returning to the Falkland Islands to mark the 40th anniversary.

He says: “It’s too far but when I went back I watched ordinary people able to get on with their ordinary lives and I thought, ‘I had a little something to do with that’.”

And the baby he helped save, Matthew McMullen, will be at San Carlos Water on May 21 to mark the day the British arrived to drive out the Argentine invaders.

Matthew said: “It was very touching to meet Jimmy and I was so moved.

“I cried when he first told me the story. I’m crying just thinking about it now.

“He was the first Para into the hall, which I didn’t realise. I can’t even bear to think about what they went through to be there and liberate us.

“I’m proud to own the farm near to the memorial because it feels like I am protecting their graves.

“Each year I go to the graves and sit there and talk with them.

“I pour a bit of whiskey on the ground and say thank you very much for our freedom.”

Lt Colonel H Jones was awarded a posthumous VC for his bravery in battleCredit: PA:Press Association 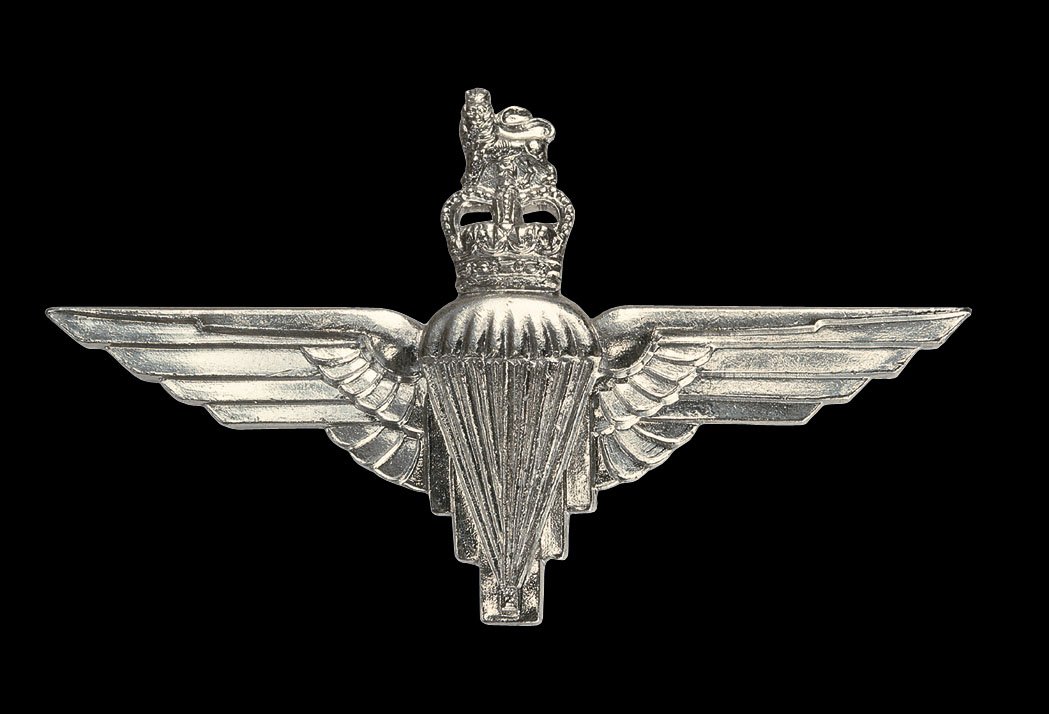 FALKLANDS commanders claim the battles for Darwin and Goose Green were a waste of lives and resources.

When five British ships were attacked after the first wave of troops went ashore on May 21, politicians in ­London were clamouring for action.

Falklands commanders claim the battles for Darwin and Goose Green were a waste of lives and resources and just government PRCredit: Rex Features

In a new Channel 4 documentary, Julian Thompson, a Brigadier who led the Royal Marines and Paras, reveals: “The order to capture Goose Green – I thought it was a stupid thing to do.”

The SAS were already on Mount Kent, ten miles from capital Stanley, and the Marines and Paras were set to march across country to join them.

SAS leader Michael Rose, a Lieutenant Colonel at the time, says: “Margaret Thatcher was increasingly saying, ‘Look, we have to give something to the people of this country to show what we’re doing’. It was an absolute shock to me. We were held up on our main advance and ordered to attack in quite the wrong direction. ­Completely nonsensical.”

The All 4 docu Secret History: The Falklands reveals the delay meant the SAS hidden on Mt Kent were discovered.

Michael Rose says: “People say Goose Green was a psychological blow to the Argentines. But it was not nearly as great as it would have been had artillery from Mt Kent been ­closing down every Argentine defence position.”

Is crypto a no-no for beginners? I invested real money to find out

‘Plan the trade, trade the plan…’ After a month of being taught the ins and outs of crypto-trading,…
byBizLifetime
No comments