The new homes are being handed out to members of the Pyongyang elite to boost morale (Picture: AP)

North Korea has released a bizarre propaganda video starring Kim Jong-un as the host of an MTV Cribs-style unveiling of new luxury apartments he is handing out to his cronies.

Footage broadcast by state media shows the dictator giving a tour of one of the riverside homes to Ri Chun-hee, a veteran newsreader famed for her theatrical takes on current affairs.

Kim hailed Ms Ri as a ‘national treasure’ for her 50-year service at the Korean Central News Agency, the only source of information for North Koreans.

The 79-year-old has made it onto billions of screens worldwide as her over-the-top broadcasts were often the only official confirmation of news from inside the ‘hermit kingdom’.

They include her tearful revelation of the death of ‘great leader’ Kim Jong-il, father of the current ruler, in 2011, and gleeful announcements of nuclear missile tests in which she railed against the West.

True to her dramatic style, she beamed with ‘tears of happiness’ as Kim Jong-un took her by the hand into her shiny new flat in the capital of Pyongyang.

The furnishings appear a little drab in comparison to the ‘cribs’ owned by the likes of Snoop Dogg, 50 Cent and the Osbournes, which were shown off in the classic noughties reality show.

But the new-builds, overlooking the Taedong river, are believed to be among the hottest available to the North Korean elite.

Officials said the properties were to be gifted to people who have ‘contributed to the prosperity and development of the country’.

They were built in celebration of the 110th anniversary of the birth of Kim Il-Sung, the founder of North Korea who is revered in almost godlike status.

She later narrated the clip of the segment shown on state TV, describing the new home as ‘like a hotel’ and remarking on her own ‘youthful vigor’. 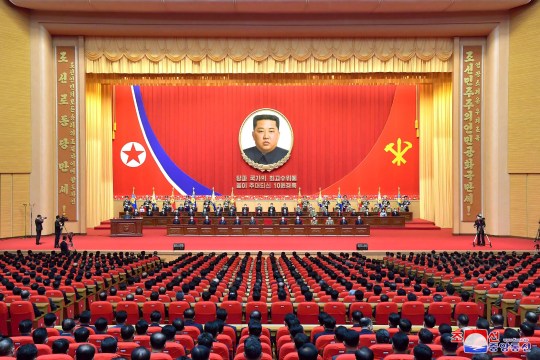 Kim was fresh from celebrating his 10-year anniversary as head of the ruling party this week (Picture: Reuters)

Ms Ri added that she and her family had ‘stayed up all night in tears of deep gratitude for the party’s benevolence’.

The official news agency added in a statement: ‘[Kim] said it is the sincerity of the party that it would spare nothing for a national treasure like her, who has worked as a revolutionary announcer for the party for more than 50 years since her girlhood.’

He was said to have expressed his ‘expectation that she would as ever vigorously continue her work in good health as befitting a spokeswoman for the party’.

Experts believe the dictator is on the hunt for good publicity after the pandemic caused its already weak economy to tank.

Moon Seong Mook, an analyst with the Seoul-based Korea Research Institute for National Strategy, said: ‘By giving houses to those who have been faithful to him, Kim Jong Un would want to further bolster their loyalty and internal unity.

‘Ri Chun Hi is a clear example of such people as she’s strongly propagated his nuclear and missile tests and served as a sort of bugler for him.’

US lawmakers hold first UFO hearing in more than 50 years

The coeliac patient was given Weetabix at Wrexham Maelor Hospital in Wales (Picture: PA / Getty) A grandmother…
byBizLifetime
No comments

One health boss warned the ‘ferocious heat’ could end in deaths (Picture: Reuters/Getty) A health boss has warned…
byBizLifetime
No comments

The revelation has been slammed as ‘utterly unacceptable’ (Picture: PA/AFP) Rwanda is making preparations to take child asylum…
byBizLifetime
No comments