The Prime Minister could yet face further penalties from police – and pay the ultimate price with his job (Picture: REX/PA)

Boris Johnson is facing ‘at least’ another three potential fines over the partygate saga, it has been claimed.

The latest revelations will raise more questions about whether the Prime Minister’s future is tenable, after he was found to have broken the law on Monday.

That gave him the dubious distinction of becoming the first sitting Prime Minister to ever do so, but he and his Chancellor Rishi Sunak have rejected calls to quit.

But tonight The Guardian and Mirror cited ‘insiders’ who believe Mr Johnson is likely to receive at least a further trio of Fixed Penalty Notices, from events that are yet to be investigated fully by the Metropolitan Police.

His wife Carrie, and Mr Sunak, were also reprimanded. All three have said sorry and paid the £50 fee.

The Metropolitan Police suggested Mr Johnson was there for an hour, but Mr Johnson’s allies have played down the incident and claimed it only lasted ten minutes. 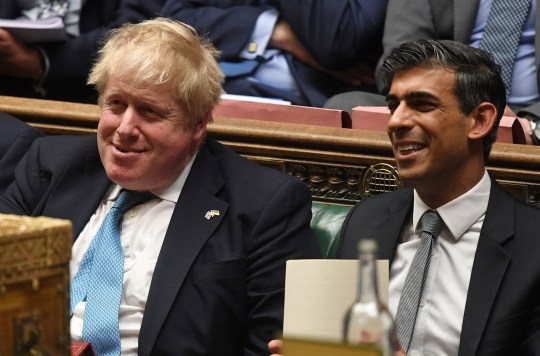 Mr Johnson said himself that ‘it did not occur to me that this might have been a breach of the rules’ – rules which he made.

But that defence may be seen as increasingly ridiculous if further fines are dished out.

He is alleged to have been at six of the 12 gathering being investigated by the Met.

The force are yet to examine a May 2020 summer party, a November gathering in Mr Johnson’s flat with Carrie on the day chief aide Dominic Cummings departed, and a leaving do in No 10 a dat later, the Guardian reported. It added that no fines had yet been handed out for those events, with others also under investigation.

Those events are said to have been more raucous.

A figure ‘close to the probe’ told the Mirror: ‘This is not the only fine Johnson is getting.’


It comes after a justice minister quit in disgust at Mr Johnson and two Tory MPs called for him to go today.

But the PM does not seem to be in immediate danger, partly because Parliament is currently in recess and also since Conservative MPs appear to have collectively come to the conclusion that Mr Johnson offers a better chance of electoral victory than his possible successors.

Others are using the war in Ukraine as a justification for not immediately removing him.

Earlier, Welsh Secretary Simon Hart said he did not see the difference between Boris Johnson receiving ‘one or two’ fines over the partygate saga.

Speaking to Times Radio, Mr Hart said ‘the principle is the same’, but added: ‘Now I freely accept there are others who take a different view to that.

The rest of the cabinet have largely fallen into line to support the PM – but more fines, a poor result in the local elections or the eventual publication of the Sue Gray report could yet spell further trouble for his premiership.

One minister who was publicly quiet over the scandal was Home Secretary Priti Patel, but a Home Office source said Mr Johnson has her ‘full support’.

It was argued it was difficult for Home Office ministers to comment on ongoing police investigations.

Tory MPs could remove Mr Johnson from power if enough of them write no confidence letters to the 1922 Committee.

Spot the long pointy nose in the water (Picture: BNPS) A swordfish has been spotted in British waters…
byBizLifetime
No comments

A circuit court judge vacated the sentence of Adnan Syed, who was convicted of murder of Hae Min…
byBizLifetime
No comments

A CONMAN splashed out more than £1million of taxpayers’ cash on flash cars, dream holidays and £1,500 worth…
byBizLifetime
No comments