Extinction Rebellion activists have brought Oxford Street and Regent Street to a standstill with a sit-down protest.

Hundreds of demonstrators gathered at Speakers’ Corner near Hyde Park on Saturday morning before marching to the West End where they sat down across Oxford Circus.

The large crowd blocked the junction and the famous shopping streets it links, chanting ‘save our planet’ and ‘whose streets, our streets’.

They stood in front of busses and waved banners that read ‘I am here for nature and children’, ‘navel gazing into disaster’ and ‘life on earth is dying’.

Extinction Rebellion billed the protest as part of ‘the final push in the plan to end fossil fuels’.

The group has warned action to block ‘areas of the city for as long as possible’ is planned every day for a week or more.

The force tweeted: ‘A number of protesters in Oxford St. and Regent St. are sitting in the road, blocking traffic in both directions. Traffic diversions are being put in place.’ 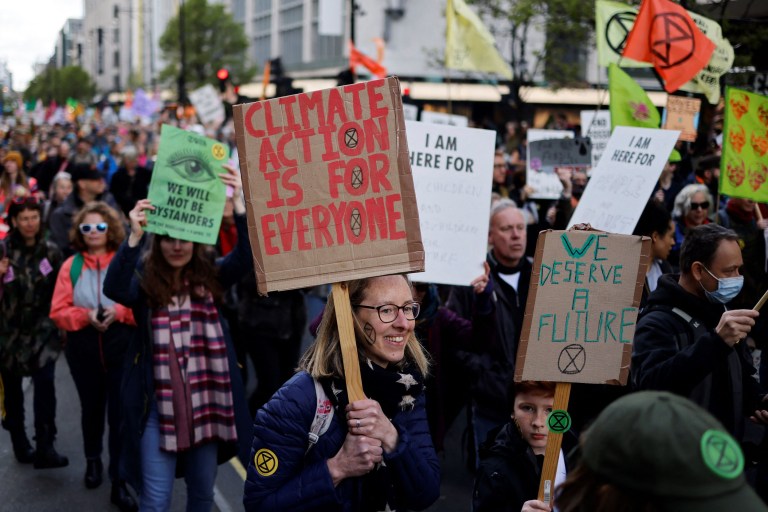 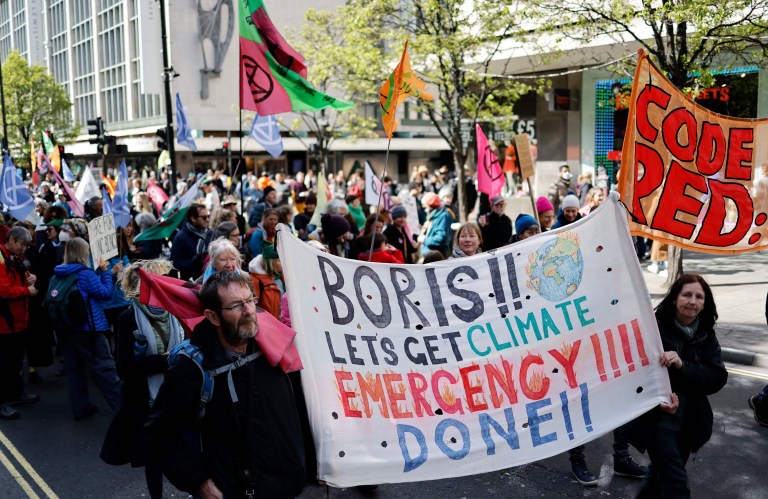 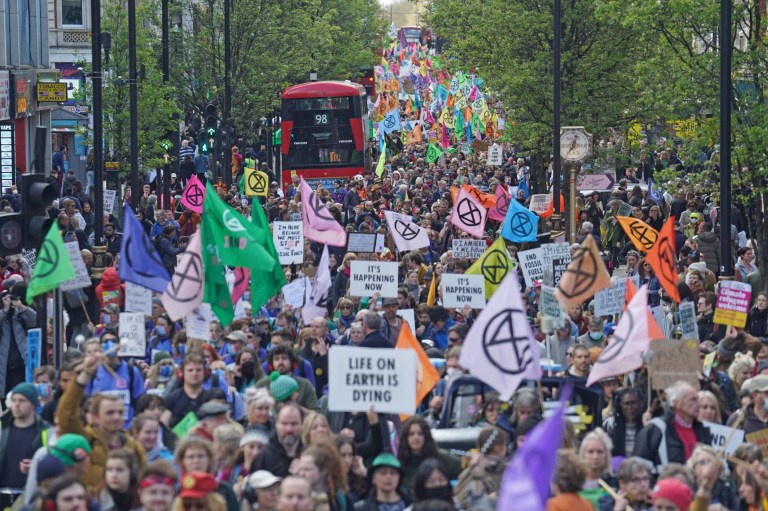 Extinction Rebellion has warned it has action planned every day for a week (Picture: PA)

Mechanical engineer Verel Rodrigues, 27, of Bristol, who was among the crowd said: ‘We are currently in a dire situation and we are appealing to the government to stop investing in fossil fuels.

‘We have no choice. We are sorry to be causing this inconvenience but we don’t have any other choice.

‘If an alarm is ringing because your house is on fire, you don’t get p***ed off at the fire alarm.

‘It is trying to save you and we are trying to raise the alarm of what is about to come.’ 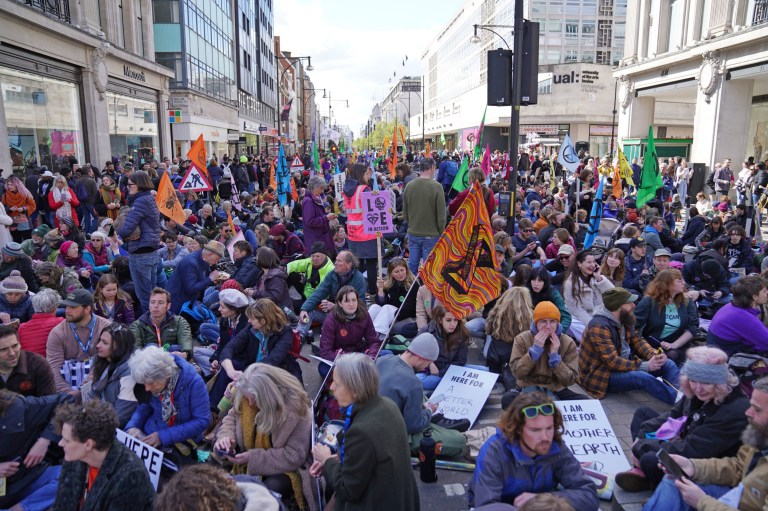 Some activists were seen eating their lunch in the sun (Picture: PA) 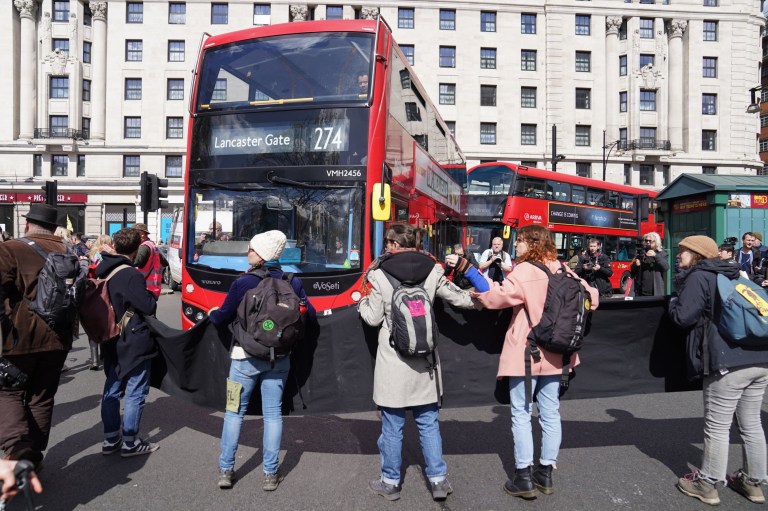 A member of the public who has been named only as Steve C, 50, of Ealing, west London, said Extinction Rebellion’s tactics have been ‘obsessive’.

‘The tactics have given the Conservative party an excuse to reduce and remove all of our rights to protest, he said.

‘It is just unacceptable.’

Steve said the protesters, whom he called the ‘most un-diverse crowd you have ever seen in London’, consisted of ‘white middle-class, do-gooding liberals (who) do not represent London town’. 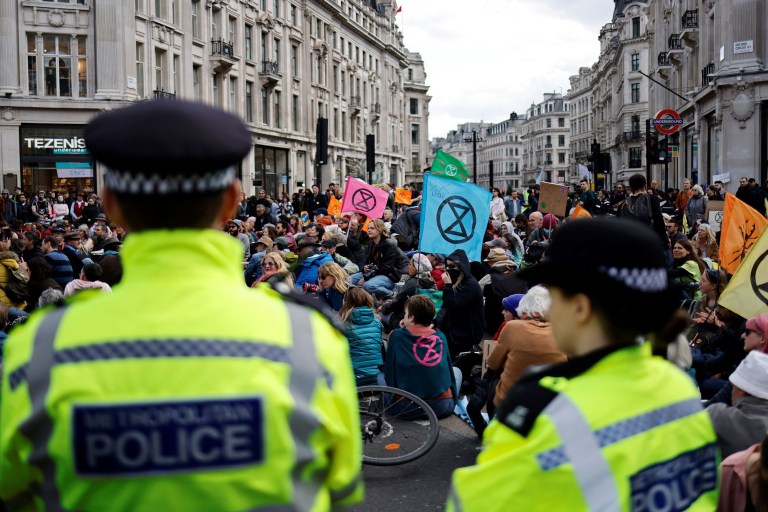 Extinction Rebellion billed the protest as part of ‘the final push in the plan to end fossil fuels’ (Picture: AFP via Getty Images) 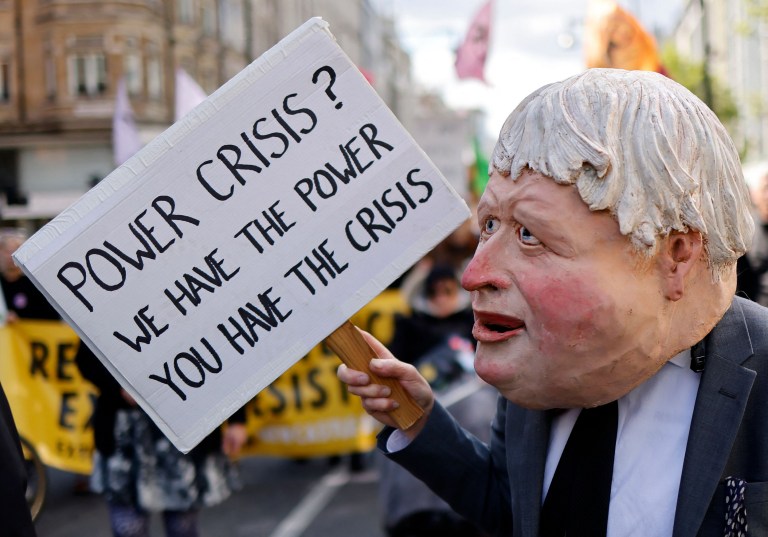 Just one of the many placards seen at the protest (Picture: Tolga Akmen/AFP via Getty Images)

Protester Sunita Ramani, 23, of Bristol, who works in environmental communications, said the action was justified and not intended to ‘annoy people.’

‘It’s absolutely not our intention to annoy people and disrupt their lives but looking throughout history civil disobedience has proven to be the most successful way that people are able to make movements like this successful,’ she said.

‘We are doing this on behalf of everyone who deserves to have a liveable, justice-filled future.’

After starting the sit-in just after 2pm, the demonstrators were on the move again around 45 minutes later, heading into the city centre.

Extinction Rebellion has pledged that its ‘disruption will not stop until the fossil fuel economy comes to an end,’ a statement on its website reads. 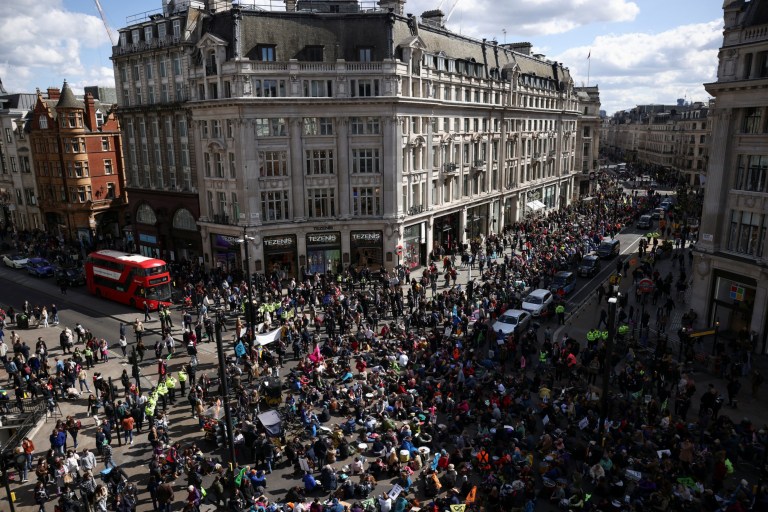 After starting the sit-in just after 2pm, the demonstrators were on the move again around 45 minutes later (Picture: Reuters) 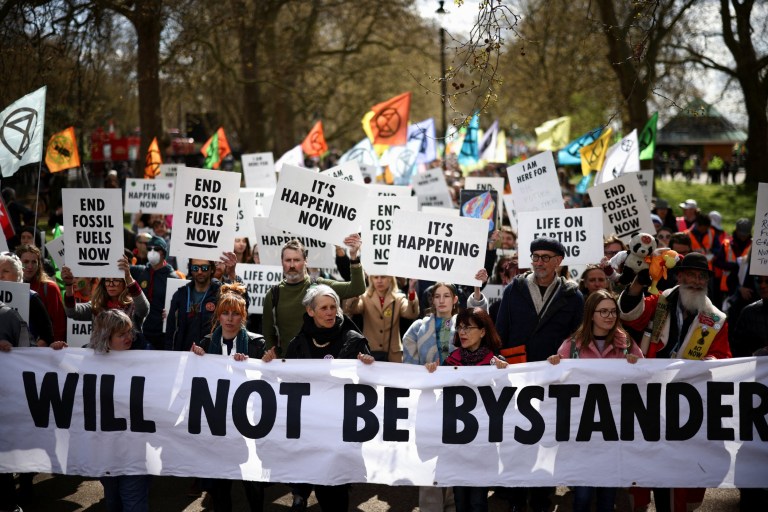 Lots of banners and placards could be seen at the protest (Picture: Reuters)

Yesterday, two protesters from the movement shut down Tower Bridge by abseiling off the sides of the London landmark and unfurling a huge banner that read: ‘End fossil fuels now.’

The bridge, a main traffic artery across the Thames, was closed to vehicles, causing long queues.

London mayor Sadiq Khan said the protest was ‘counterproductive’ adding that demonstrators needed to win over public opinion at the same time as putting pressure on the government.

Why long car journeys are so excruciating for your kids

David Venables is alleged to have ‘got away’ with his wife’s murder for nearly 40 years (Pictures: SWNS)…
byBizLifetime
No comments

BRITS are making the most of the weekend mini heatwave by heading outdoors for sex, a poll reveals.…
byBizLifetime
No comments

New York: Shark flies out of water by beach closed due to sightings

A shark leaped out of the ocean by New York City, confirming fears of the predators’ presence just…
byBizLifetime
No comments