A distraught homeowner has told how reckless builders who botched a job next door have turned his house into a ‘death trap waiting to happen’.

They dug so close to his home in Denton, Greater Manchester, they left his garage ‘unstable’ and at risk of falling down.

His problems all began when Mustapha Matib, who is not a builder, took it upon himself to act as principal contractor for the project to build himself a new home.

Eventually Matib was prosecuted and handed a suspended prison sentence for breaching health and safety laws.

But Shaun says he and his wife have been left with an ‘absolute eyesore’ and a home they can’t sell.

Planning permission for the project was granted in the summer of 2018 for a new two-storey detached house next door. 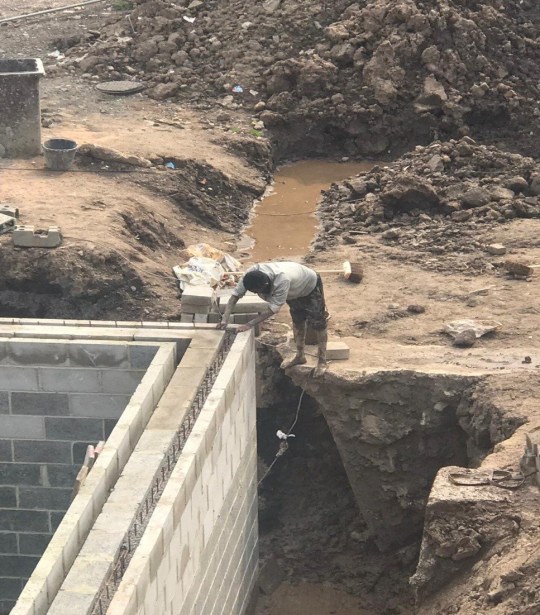 Barefoot workers were spotted leaning over large holes with no protection at all (Picture: HSE/MEN Media) 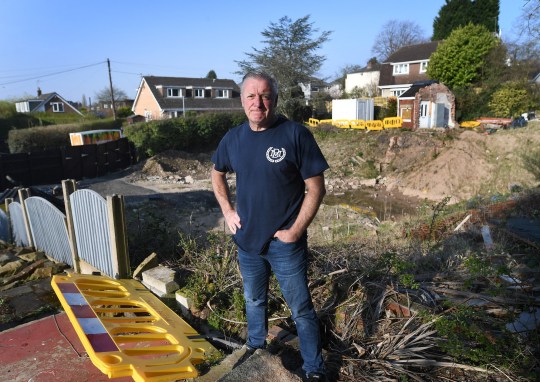 Shaun, 60, says ‘cowboy’ Mustapha Matib refused to engage with him over his plans (Picture: MEN Media)

After this the bungalow, garage and carport on the site were demolished, followed by what Shaun described as an ‘invasion’ of demolition people.

‘It was like something you might have seen in the sixties or seventies, lads just wandering around, ripping stuff down,’ he added.

Shaun said the garage that neighboured his own was torn down along with three conifer trees.

Soon after he claims a digger came very close to their fence line, and his wife asked the builder what he was doing.

‘He said the measurements he’d been given would have taken him halfway into our garden. Of course by then it’s all too late – it had been dug out right up to our line,’ Shaun added. 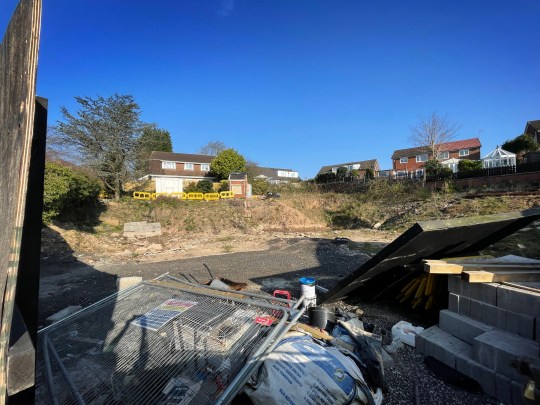 The site in Denton, Greater Manchester, has been secured, but Shaun is still dealing with the mess (Picture: MEN Media) 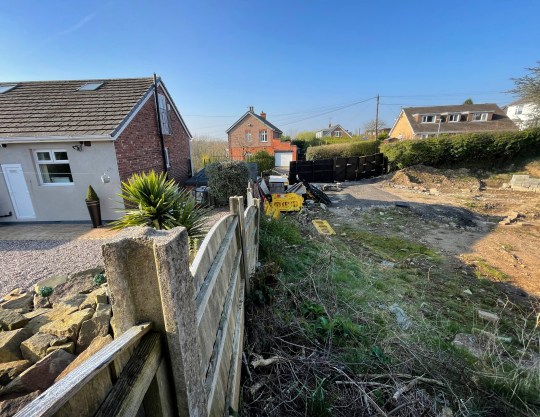 Shaun was told his garage was now ‘compromised’ and was advised to take his car out of it.

‘Now I just keep thinking: “Is this going to collapse one day?” We’re living on tenterhooks. It could be a total catastrophe with respect to my house,’ he added.

Inspectors found a ‘large, deep and unprotected excavation’ which neighbours believed was meant to be the swimming pool, which became more hazardous after it was filled with water during rainy weather.

Shaun added: ‘At that time there was nothing to stop people getting on the site. Then they put some crappy Harris fencing up with no lock on it or anything. I had to secure it myself a few times. Kids could have got in at any point.’

Following the excavation work, fences along Shaun’s property boundary started to fall, meaning he was unable to let his dog run loose in his own garden.

The HSE eventually established Matib had failed to prepare a construction phase plan with risk assessments and method statements detailing how the work would be safely carried out.

He also failed to appoint a site manager with suitable skills, knowledge, and experience to plan, manage and monitor the work; and ensure the health, safety, and welfare of workers.

Shaun said Matib was ‘just a cowboy without putting the horses anywhere’, adding that he ‘refused to engage’ with him at all.

He was sentenced to 16 weeks in prison, suspended for 12 months, ordered to carry out 200 hours of unpaid work, and to pay costs of £5,673 at Manchester Magistrates’ Court.

Ghost was stolen from Joel Banks as he was loaded into an ambulance (Picture: Jam Press) A man…
byBizLifetime
No comments

THE family of a mum and 12-year-old daughter found “murdered” at home have revealed their “utter devastation, despair…
byBizLifetime
No comments

Bosses have promised customers they will taste the same (Picture: ANDY RAIN/EPA-EFE/REX/Shutterstock) The Walkers crisps recipe will be…
byBizLifetime
No comments