Emergency services were called to a home in Wythenshawe after an explosion (Picture: MEN)

A man has died after a home was blown apart in a suspected gas explosion.

Pictures shared on social media showed a house left with a gaping hole in the second floor of a mock Tudor house in Wythenshawe, Greater Manchester, which has been confirmed as the site of a blast on Thursday evening.

All neighbours in a risk zone around the property were evacuated after the incident, while power was knocked out in a number of adjacent buildings.

Four fire crews wearing special gas masks rushed to the scene at around 6.30pm and battled until 8pm to control the flames caused by the ignition.

There was no immediate confirmation whether any other people were in the property with the victim, who has been described as a male in his 90s.

The evacuated residents and their pets were later welcomed into a local church to keep warm with cups of tea.

‘We heard the explosion and saw all the smoke and immediately went back inside to open up.’ 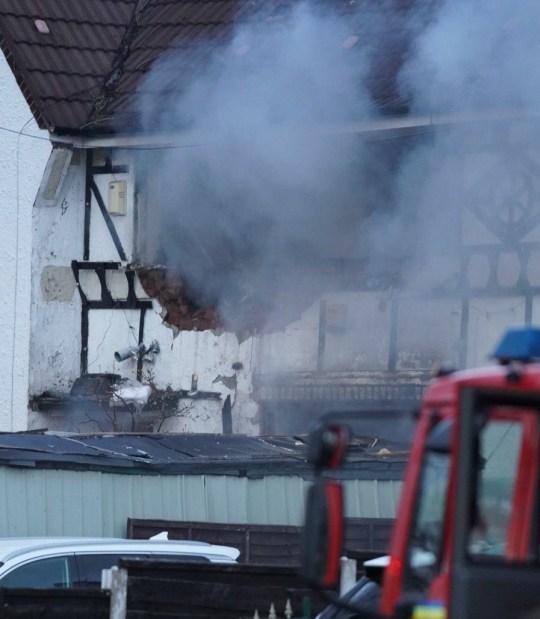 Smoke was seen billowing out of the mock Tudor house on Thursday evening (Picture: MEN Media) 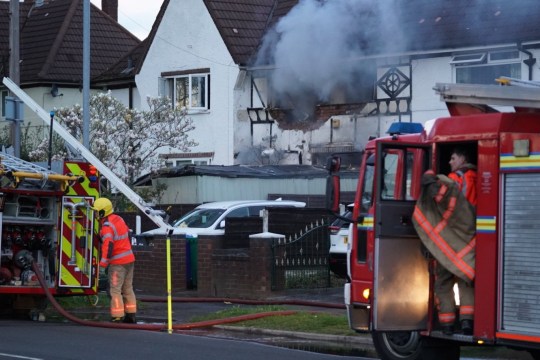 It took fire crews nearly an hour-and-a-half to bring the blaze under control (Picture: MEN Media)

Many were still unable to return home late on Thursday night as the scene remained locked down while engineers investigated the potential leak.

Manchester Metrolink’s Crossacres tram station, which is situated opposite the site of the blast, has been closed, and services will not stop there until further notice.

Several surrounding roads were closed and drivers were urged to avoid the area.

A spokesperson for Greater Manchester Police said: ‘Emergency services have been in Wythenshawe this evening where sadly a man has died following a suspected gas explosion. 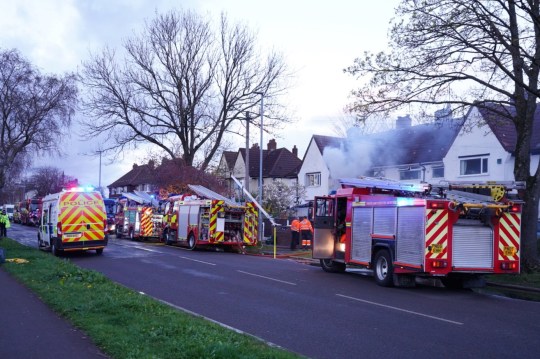 The blast knocked out power to adjacent properties and forced a nearby tram stop to close (Picture: MEN Media) 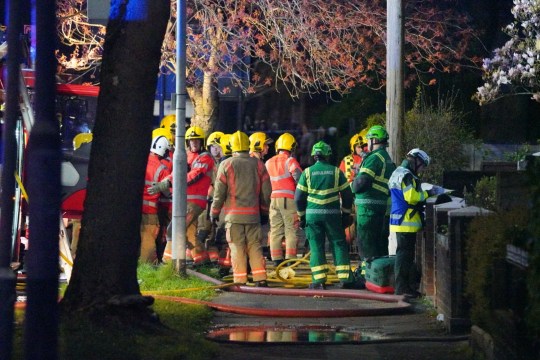 ‘The scene has been made safe but there are road closures in place and we will be on scene this evening.’

A spokesperson for Greater Manchester Fire and Rescue Service said: ‘At around 6.30pm today, crews were called to reports of a fire at a domestic property on Brownley Road in Manchester.

Got a story? Get in touch with our news team by emailing us at [email protected]. Or you can submit your videos and pictures here.

A FLIGHT attendant has revealed five things you should never do on an airplane. Tommy Cimato, a flight…
byBizLifetime
No comments