Michael Fabricant sparked outrage from one nursing organisation over his suggestions about their conduct during lockdown (Picture: PA/REX)

A Tory MP has called for a bar to be installed in Downing Street during an extraordinary defence of Boris Johnson’s law breaking antics.

Michael Fabricant said the rules breached by the Prime Minister were not clear – before being forced to concede by radio host Nihal Arthanayake that the PM had made the rules himself.

He continued: ‘I know many teachers, doctors that would sit down and have a quiet drink at the end of the day, and whether or not they took their drink into the hospital or school in a suitcase and whether it was a back pack or whatever is irrelevant.

‘The reason I make that point is that that had been done for a long time – not just pre-pandemic, by previous administrations. In my view, they should just have a bar in Downing Street, just as there is in the Palace of Westminster.’

Referencing the ‘suitcases of booze’ brought into Downing Street for some of the various events that Mr Johnson’s government long denied ever took place, Mr Fabricant argued: ‘That’s the only way you could actually get alcohol into Downing Street… It’s not very dignified.’

His intervention comes after both Mr Johnson and his Chancellor, Rishi Sunak apologised for breaking Covid rules and paid fines that the Metropolitan Police hit them with today.

He becomes the first siting Prime Minister to have been found to have broken the law.

Mr Johnson claimed earlier: ‘At that time, it did not occur to me that this might have been a breach of the rules.’

Turning back to the behaviour of others during lockdown, Mr Fabricant went on: ‘I think you have to take it in context in the sense that I know lots of people who were working long hours did, at the end of the day, have a quiet drink. 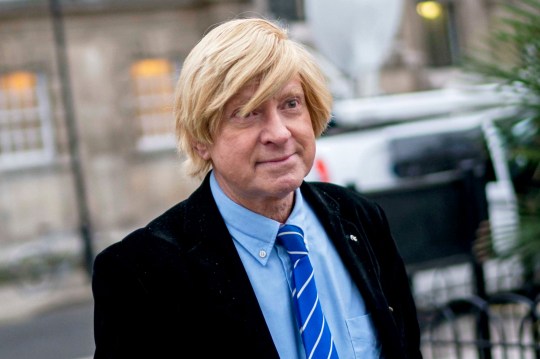 Boris Johnson should apologise in the House of Commons, Mr Fabricant said (Picture: Will Oliver/EPA-EFE/Rex/Shutterstock)

‘Whether you would call that a party is another matter and that ranges not only from civil servants but to nurses and others, and no one would begrudge them that.’

The PM and Mr Sunak have faced widespread calls to resign following the explosive revelations about the gathering in the Cabinet Room on June 19, 2020 to mark Mr Johnson’s 56th birthday.

But Mr Fabricant dismissed the idea and called for the PM to apologise to the House of Commons.

His comparison of Mr Johnson’s birthday bash with nurses having a drink at the end of their shift were branded ‘factually incorrect’ by the Royal College of Nursing (RCN) has said.

Writing to him, Pat Cullen, the organisation’s general secretary, dismissed the idea that the pandemic was over and said: ‘Throughout the pandemic – and still certainly, now – most days, nurses and nursing support workers, when finally finishing a number of unpaid hours well past shift end, will get home, clean their uniforms, shower and collapse into bed.

‘Throughout the early pandemic, this was often alone, for the protection of others – kept away from family, friends and support networks.

‘These shifts – in communities, in hospitals, anywhere people are – are long, unrelenting, understaffed and intense.

‘At the end of one of the many hours, days and years we have worked, since recognition of the pandemic, I can assure you that none of us have sought to hang out and “have a quiet one in the staff room.”


‘There isn’t a site in England that would allow alcohol on the premises for any professional to consume during working hours.’

He continued: ‘As frontline professionals, still dealing with the implications of the pandemic – understaffed, underpaid, overworked, exhausted, burnt out and still holding it together while doing the best we can for our patients, it is utterly demoralising – and factually incorrect – to hear you suggest that our diligent, safety critical profession can reasonably be compared to any elected official breaking the law, at any time.’

Mr Johnson, speaking to broadcasters at Chequers, said he ‘fully respects’ the outcome of the police investigation and that he accepted ‘in all sincerity that people had the right to expect better’ from him.

The president’s official residence in the capital, Colombo, was stormed yesterday (Picture: Reuters) The whereabouts of Sri Lanka’s…
byBizLifetime
No comments

One of the best every images of a supposed UFO has been recreated in high defintion. (Credits: Getty)…
byBizLifetime
No comments