Moment preschoolers chant they want Joe Biden out in class

A preschool teacher has come under fire after a video of her leading students in a chant calling on President Joe Biden to leave office caught the attention of parents.

The shocking clip shows the unnamed teacher at the Turning Point Christian School in Southern California asking the young students, ‘Who’s our president?’

‘What do we want to do with him?’ the teacher asks.

‘We want him out!’ the students yell back in unison.

A clip of the unnamed teacher’s President’s Day lesson was shared on an internal app used by the parents to communicate with school officials.

One parent, Christina McFadden, watched in horror before contacting the school.

‘The teacher is indoctrinating her students,’ McFadden, whose daughter was featured in the clip, told KTLA.

‘Everybody has a right to believe in what they want and my daughter wasn’t given that opportunity. And especially at that age, I don’t think that she can comprehend to make an informed decision on who and what she should believe in.’ 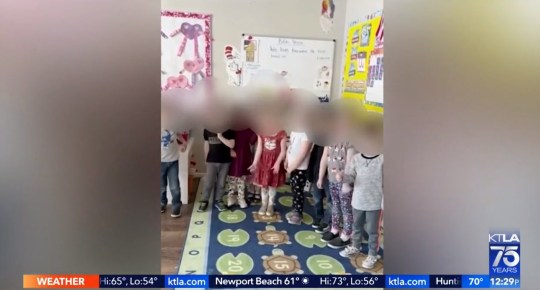 A President’s Day lesson turned controversial when a parent saw video of her daughter among students chanting about wanting Joe Biden out of office (Picture: KTLA)

After McFadden reached out with concern, officials removed the video from the internal site. The school stopped short of removing the teacher from her position.

In an apology to parents, Turning Point Christian School said the video did not share the school’s ‘philosophy of honoring and respecting authority, including those in government positions.’

McFadden was told the teacher was spoken to about the video, but that ultimately, officials were ‘OK with it.’

In a statement to ABC 7 the school said they were ‘sorry for any misunderstanding.’ McFadden still wants to know what kind of lesson her daughter was even being taught.

‘It doesn’t matter at this point what side of the fence you’re on. This can happen in your child’s classroom, and it is happening,’ she said. McFadden has since removed her daughter from the school.

It’s unclear what, if any, disciplinary action was taken against the educator.

Over half of voters would pick Keir Starmer over Boris Johnson, poll claims

Dmitry Rogozin also announced that a British YouTuber had been arrested (Picture: Reuters) A key ally of President…
byBizLifetime
No comments

Drink-driving mum yelled ‘why didn’t I put on their seatbelts?’ after killing kids, 4 & 10, in a deadly smash

A DRUNK mum screamed “why didn’t I put their seatbelts on?” after killing her two children in a…
byBizLifetime
No comments