Martin Lewis has warned of ‘civil unrest’ as the cost-of-living crisis leaves many struggling to survive.

The MoneySavingExpert founder has confessed he’s ‘scared for people’ as the PwC warns households are set to be £900 worse off this year.

His site has been updated to give tips on how to stay warm without heating amid a ‘historic fall’ in living standards’.

‘We need to keep people fed. We need to keep them warm. If we get this wrong right now, then we get to the point where we start to risk civil unrest’, Mr Lewis told The Sunday Telegraph.

‘When breadwinners cannot provide, anger brews and civil unrest brews – and I do not think we are very far off.

‘I get all these messages from people tearing their hair out. They don’t know how to make things add up.’

The financial journalist added that he ‘felt slightly sick’ giving the green light for his new ‘staying warm without heating’ feature.

‘We are talking hot water bottles in sleeping bags territory. This is one of the richest countries in the world. It’s pretty desperate, isn’t it?’ he said. 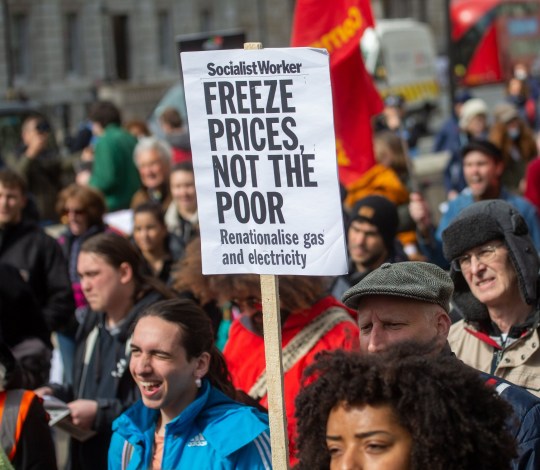 A ‘historic fall’ in living standards’ is occurring, according to the PwC (Picture: Tayfun Salci/ZUMA Press Wire/REX/Shutterstock)

‘It is not an exaggeration to say that there are people we have to prevent freezing or starving.’

The lowest earners across the UK could be hit with a £1,300 blow – but this may spiral even further if Vladimir Putin continues to bombard Ukraine, according to the latest UK economic outlook report from PwC.

The choice between eating and heating was a dilemma already faced by two in five, even before soaring fuel and food prices came into effect.

Benefits will rise by 3.1% this week, but inflation will hit 8.4% later this year, which will mean a 2% drop in household incomes.

It marks the biggest fall in real wages since the 1970s and the largest decline in living standards since records began.