TIME-RICH baby boomers do an extra 104 minutes of exercise per week compared to Gen-Z, according to research.

Data found Baby Boomers – those aged 57-70 – were the most active, exercising for an average of 215 minutes a week.

In contrast, Gen Z – those aged 18-24 – were the least active, only exercising on average 111 minutes per week.

Exercise also has a positive impact on mental health, as Baby Boomers rated their mental wellbeing higher than their younger counterparts.

Whereas Gen-Z, who were the most inactive, had the lowest score at just 55 out of 100.

There are many reasons behind this “generational exercise gap”. A follow up study of 2,000 adults commissioned by the brand found 38 per cent of baby boomers saw regular physical activity as ‘essential’ to remain connected to their peers.

And 82 per cent consider it important for their mental wellbeing, with more than seven in 10 admitting they realised this as they got older.

But for Gen Z, who exercise the least of all age groups, more than half said they are time poor and struggle to fit physical activity around work and social commitments.

Other barriers for young adults when it comes to exercise included not having the motivation, or feeling they weren’t educated enough on how to stay fit and healthy.

Baby boomers also said exercise was their top hobby, but Gen-Z are more likely to spend their spare time watching TV, listening to music or sleeping.

And as many as six in 10 Gen-Z adults admitted there are some days where they just can’t find the motivation to get themselves up and out of the house. Yet the good news is that 69 per cent do want to be more active.

Although the global population thinks 30 minutes is the minimum amount of exercise required to experience the uplifting impact of movement, the research shows just 15 minutes and nine seconds is all it takes.

Dr Brendon Stubbs, a leading exercise and mental health researcher from King’s College London who led the study, said: “There is a common perception that you need to move for a long time to experience the uplifting benefit.

“However, our new research proves this is not the case – just over 15 minutes of movement is actually all it can take to experience the positive impact.

“We hope it will be inspiring for many to see the impact that such a small amount of movement can have.”

Men have a higher ‘State of Mind’ than women (67 compared to 59), while Londoners came out on top with a score of 65.

Gary Raucher, executive vice president, ASICS EMEA added: “At ASICS, it has long been our belief that sport has the power to uplift both an individual and the world like nothing else.

“While the results of our Global State of Mind Index prove just how intrinsic the link between regular movement and positive mental health is.

“They also show the potential impact a small amount of movement could have in raising the world’s collective State of Mind.” 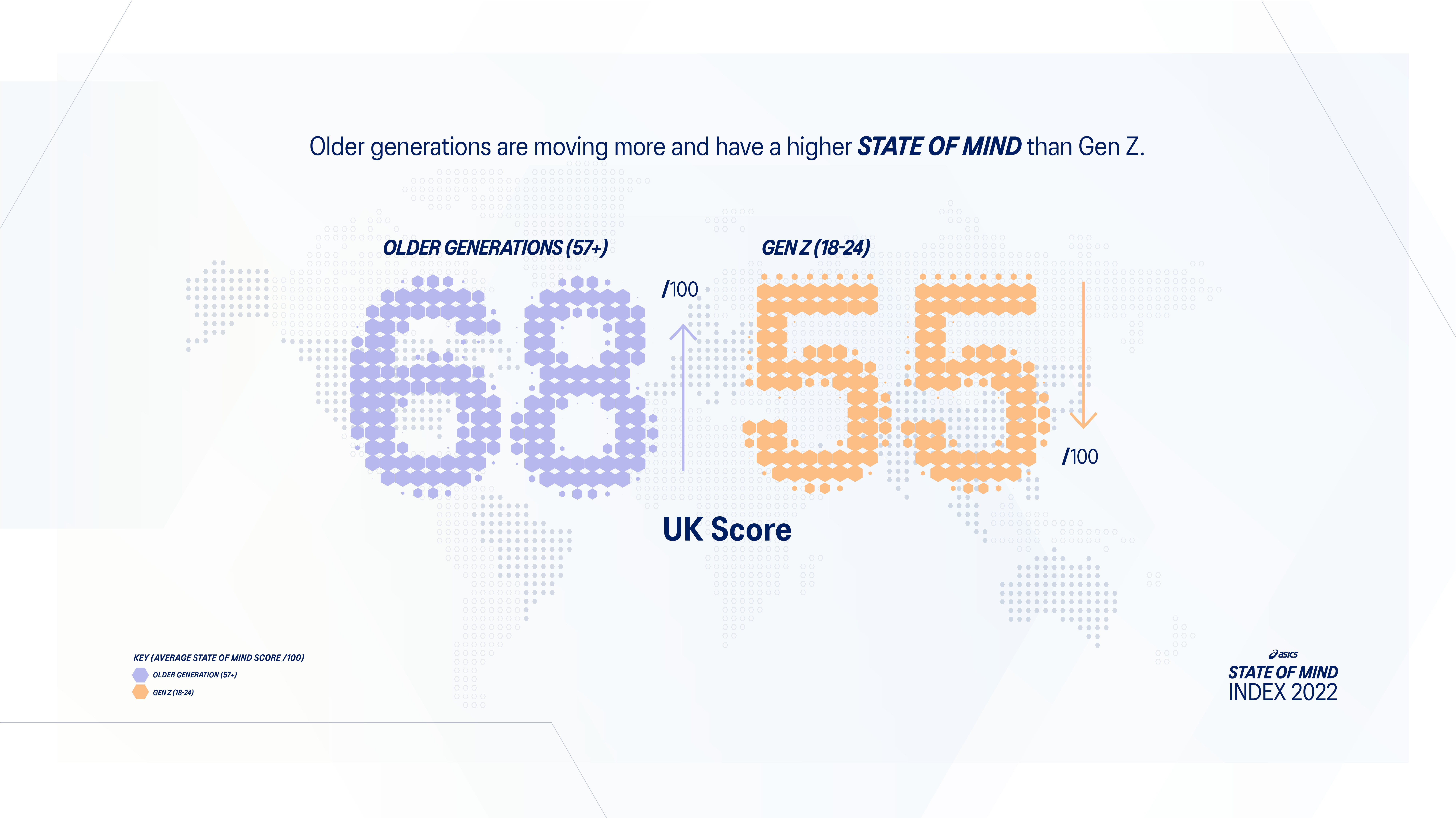 Older generations are moving more and have a higher state of mind than Gen ZCredit: Supplied

Parents think kids should have independence, get a phone and choose own haircut at age 12, survey reveals

PARENTS think kids should be given independence from the age of 12, by being able to choose their…
byBizLifetime
No comments

An Indiana mom who went missing was found dead in a creek, and police blame her husband for…
byBizLifetime
No comments

It is unclear if the incident on the Pont Neuf was linked to the election (Picture: AFP/Reuters) Two…
byBizLifetime
No comments