Video call mishaps became the break-out light entertainment genre of the Covid crisis – but one California couple may just have topped them all.

Damian Mlotkowski was on a weekly virtual call when his husband wandered in to the room naked – only to realise his mistake and zoom to the floor to hide.

The not safe for work moment amused Damian’s colleagues, who chuckled as Jason Bowers, typing a message on his phone, clocked his partner’s camera and instantly dropped out of sight.

Luckily for the pair, a conveniently-placed chair saved Jason from further embarrassment.

The 35-year-old had just come out of the shower completely starkers when he walked into their bedroom.

But Damian, also 35, was on camera with 12 of his colleagues.

Jason, from West Hollywood, said of the incident late last year: ‘I had no idea he was on a meeting.

‘I was so focused on my message I was writing that I didn’t look up so I couldn’t see he was on a call.

‘Damian was looking down at the time so he didn’t realize I was coming in either.

‘As I was going into the room I began to realize that the voices I was hearing might be a Zoom meeting, to which then I looked up and, yep, I was right!’

He continued: ‘I dropped to the floor because I was so embarrassed that they might have seen me naked, and by dropping to the floor they wouldn’t be able to see me hopefully.

‘When I fell to the floor I started laughing hysterically because I had no idea what they saw.’ 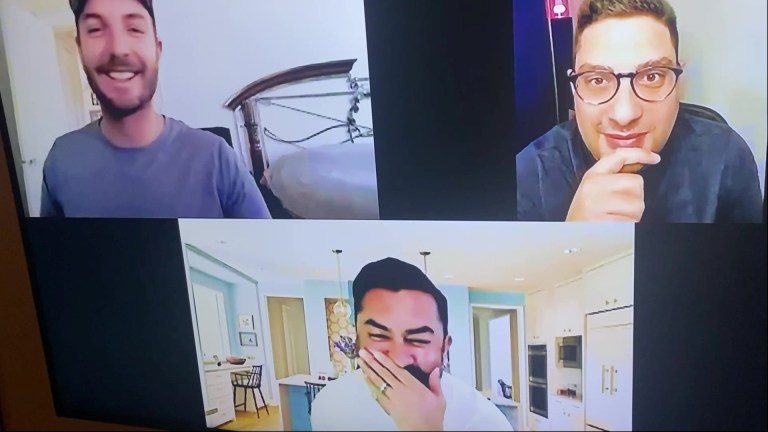 Colleagues were entertained by the mishap (Picture: SWNS) 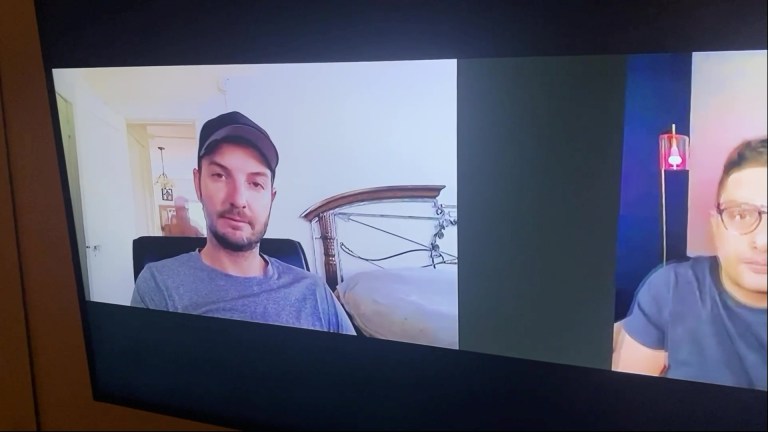 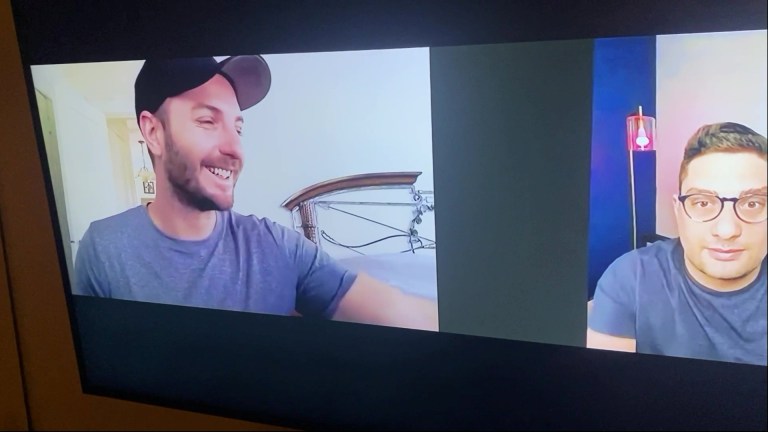 But husband Damian had and his workmates had already noticed (Picture: SWNS)

Quick-thinking real estate agent Damian smirked, gestured that he needed a moment and promptly turned off his camera – but not before his colleagues started to laugh and his boss said ‘nudity is fun!’.

The Paramount producer said: ‘I was living my worst nightmare, I was embarrassed but also found it to be hilarious.

‘My first reaction was thank God the chair was there, and my second reaction was “why does it look like I fell through a hole in the floor?” 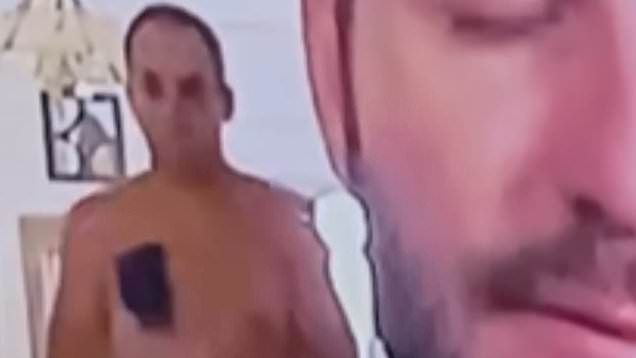 Luckily for the couple, a chair was obscuring the view (Picture: SWNS) 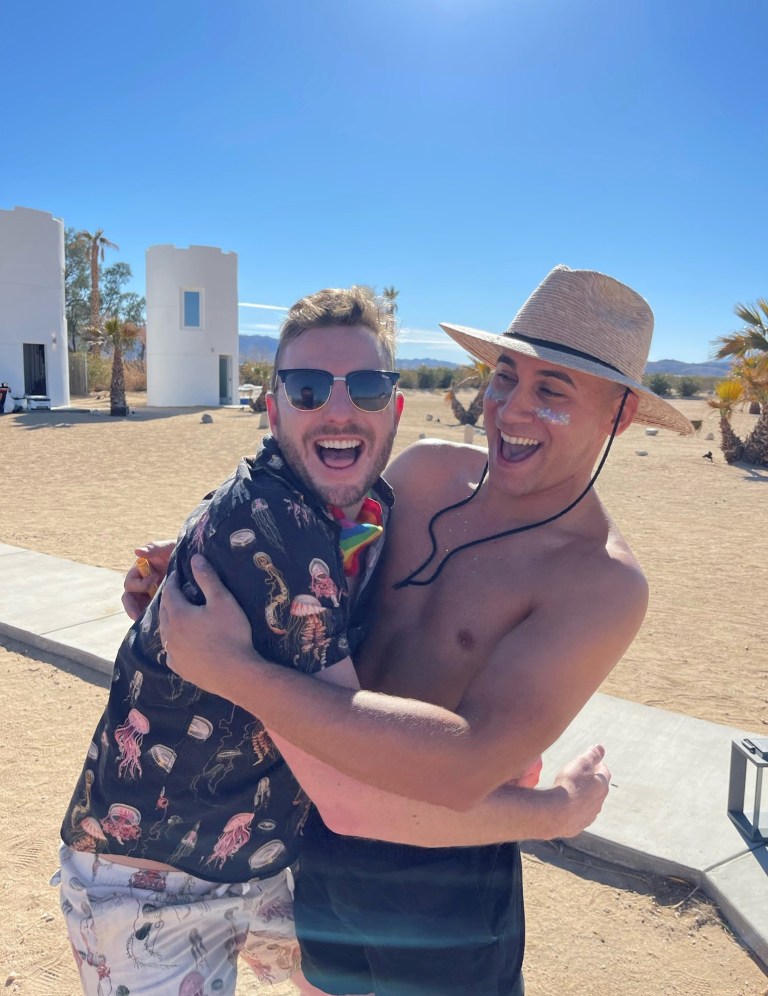 The couple, both 35, went to a work Christmas do later that day (Picture: SWNS) 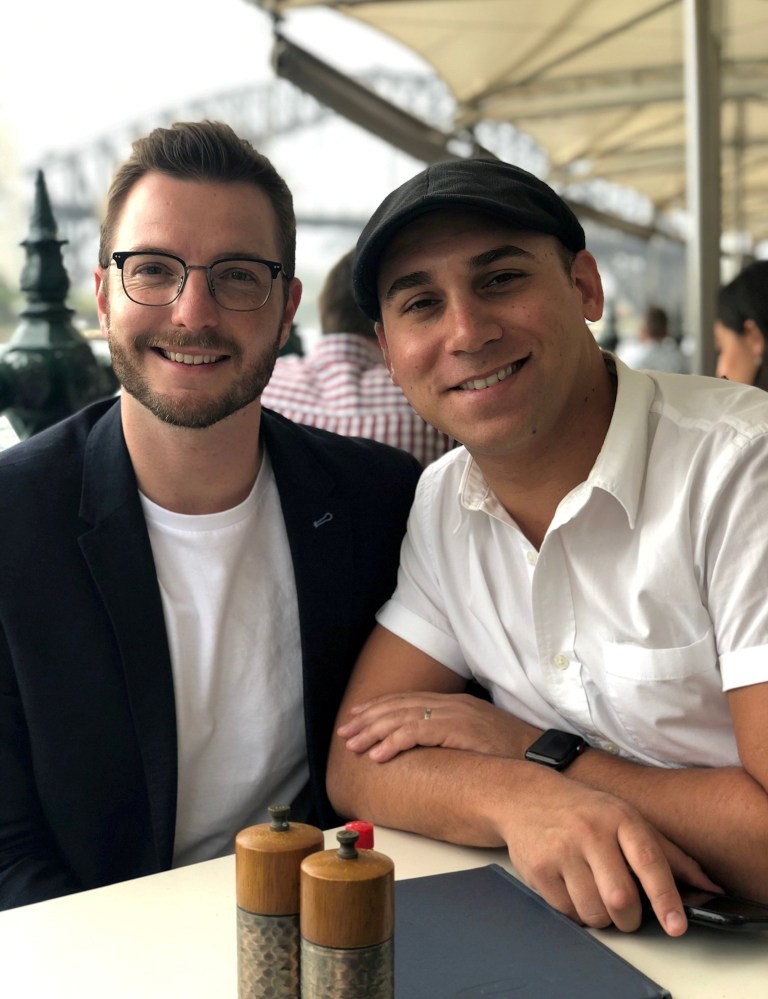 12 colleagues were on the call which showed the married couple’s bedroom (Picture: SWNS)

‘I was mortified, but overall I think it’s such a funny moment.’

Later on that evening, the couple attended the estate agency’s Christmas party, and all joked about the working from home blunder.

Jason said: ‘I would say that blurred backgrounds were created for these types of situations, so use them.

‘But also get yourself a cool boss that deals with mishaps like a champ!’

The alleged incidents took place in a section of the queue near Victoria Tower Gardens (Picture: AFP) Two…
byBizLifetime
No comments

My daughter, 5, was left in a coma after she fell through the window