As a non-domiciled (non-dom) UK resident she is not required by law to pay UK taxes on her overseas income (Picture: PA)

Rishi Sunak’s wife has announced she will pay UK taxes on her overseas income, following a row over her non-dom status.

Billionaire Akshata Murty, who is said to be richer than the Queen with an estimated net worth of £430 million, told the BBC she did not want to be a ‘distraction’ for her husband.

Earlier this week it emerged she held non-domiciled (non-dom) status, meaning she is not required by law to pay UK taxes on her overseas income.

Her spokeswoman said the set-up is required because she is an Indian citizen, but MPs and tax experts have disputed this.

The arrangement means her permanent home is considered outside the UK, despite the Sunaks living in a mansion in Kensington, west London, with their two children.

It also means that while most people in the UK pay taxes on all of their income – no matter where it comes from – Ms Murty is only taxed on what she earns inside the country.

This has potentially saved her millions over the years, according to the Independent, who first broke the story. 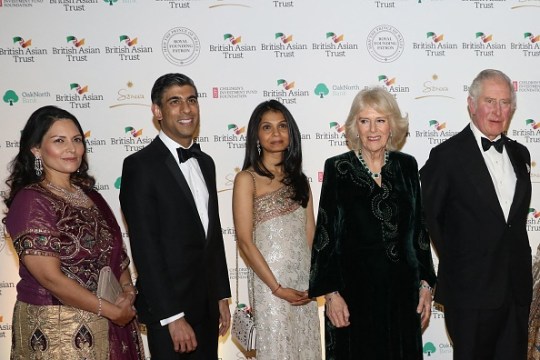 Akshata Murty said she did not want to be a ‘distraction’ for her husband (Picture: Reuters)

Although it is entirely legal, non-dom status it is optional, and people who have it can still choose to pay full taxes in the UK.

Labour accused the chancellor of hypocrisy, saying his family is benefiting from the arrangement at a time when the rising cost of living is forcing millions of families to choose between ‘heating or eating’.

But Mr Sunak has accused political opponents of ‘smearing’ his wife to get at him.

In a statement, Ms Murty said she did not want her non-dom status to be a ‘distraction’ for her husband.

‘For this reason, I will no longer be claiming the remittance basis for tax,’ she said.

‘This means I will now pay UK tax on an arising basis on all my worldwide income, including dividends and capital gains, wherever in the world that income arises.

‘I do this because I want to, not because the rules require me to.

‘These new arrangements will begin immediately and will also be applied to the tax year just finished.’

The change comes on the same day Rishi Sunak admitted he held onto his US residency card for years after becoming a government minister – fuelling questions about his own tax affairs.

The chancellor and his wife both held green cards while they lived in America in the 2000s, and kept their status after returning to the UK.

On Friday they were reported to have continued declaring themselves ‘permanent US residents’ for tax purposes.

In a statement, a spokesperson for Mr Sunak confirmed that he kept the residency even after becoming chancellor, failing to give it up until 19 months later.

Ms Murty said her tax arrangements had been ‘entirely legal’ but added ‘it has become clear that many do not feel it is compatible with my husband’s role as chancellor’.

She added: ‘I understand and appreciate the British sense of fairness and I do not wish my tax status to be a distraction for my husband or to affect my family.’

Ms Murthy reportedly owns £700m in shares of the Indian IT giant Infosys, founded by her father, from which she received £11.6m in dividend income last year.

When her non-dom status emerged, the fashion-designer and daughter of billionaire entrepreneur N.R Narayana Murthy – the sixth richest man in India – said she pays taxes on all UK income.

But Labour frontbencher Ed Milliband said questions were legitimate as Mr Sunak’s immediate family ‘are sheltering a large part of their income from UK taxes’ during a time of real hardship.

Professor Richard Murphy, the Sheffield University academic who co-founded the Tax Justice Network, also questioned her statement, insisting that being a non-dom is a ‘choice’ she can relinquished.

What is a non-dom?

A  ‘non-dom’ is a person who typically has their permanent home (‘domicile’) outside the UK. They may not have to pay UK tax on foreign income.

The same rules apply if you make any foreign capital gains. For example, if you sell shares or a holiday home abroad.

According to the UK Government, your domicile is usually the country your father considered his permanent home when you were born.

It may have changed if you moved abroad and you do not intend to return.

Non-doms do not have to pay UK tax on their foreign income or gains if both the following apply:

This is a breaking news story, more to follow soon… Check back shortly for further updates.

Got a story? Get in touch with our news team by emailing us at [email protected]. Or you can submit your videos and pictures here.

The majority of the radioactive plume from Zaporizhzhia would fall on Ukraine and bordering Russia (Picture: Metro.co.uk) A…
byBizLifetime
No comments

Tributes to boy, 14, who died after suddenly collapsing in class as students left devastated

A TEEN boy who died after suddenly collapsing during class was “very full of life”, loved ones said. …
byBizLifetime
No comments